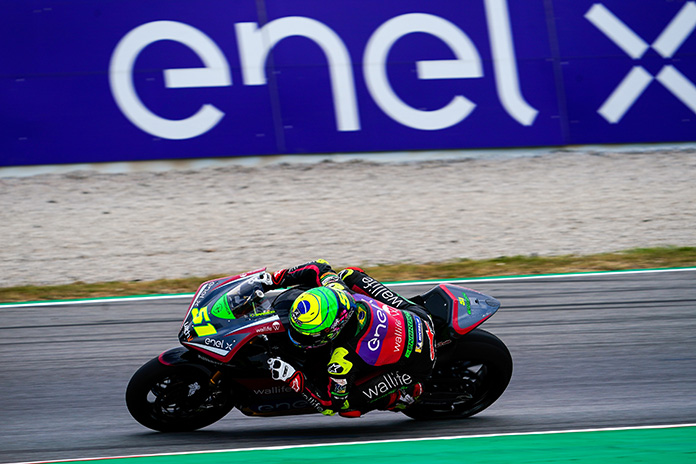 The Brazilian does it again in Barcelona, heading the grid from Torres and Aegerter at Round 3 of the FIM Enel MotoE™ World Cup.

After the first few laps, 2019 World Cup winner Matteo Ferrari (Indonesian E-Racing Gresini MotoE) set a 1:51.187 to set title chase leader Alessandro Zaccone (Octo Pramac MotoE) a time to beat, and that’s exactly what the latter Italian did. Zaccone was the first rider into the 1:50s in E-Pole – a 1:50.813 – as nine riders waited their turn in the one-lap dash for glory in Barcelona.

Mattia Casadei (Ongetta SIC58 Squadracorse) slotted his Energica Ego Corsa into P2, 0.264s off Zaccone’s time, before Aegerter set his best lap of the weekend to go provisional pole position by 0.094s. Miquel Pons (LCR E-Team) was the next rider to set a lap time and the Spaniard missed out on beating Aegerter by a whisker, the rookie going second by just 0.007s.

Torres soon rose to the fore though, setting a 1:50.517 to go P1 by over two tenths. It was then Lukas Tulovic’s (Tech 3 E-Racing) turn to power his way around the lap and in Sector 1, the German was 0.408s under Torres’ time. However, Tulovic failed to hold his advantage to the line and slotted into P4, with just Granado and Fermin Aldeguer (Openbank Aspar Team) left to go…

Granado’s first split was a stunner – 0.337s under Torres, and it was pretty much the same through Sector 2. Granado was two tenths up through the third split and sure enough, the Le Mans winner crossed the line and took provisional pole by 0.071s. Next up: Free Practice pacesetter Aldeguer. Could the rookie do it?

The first half of the lap didn’t quite hook up, and the 16-year-old was 0.404s down on Granado’s time. That became half a second at the third split and ultimately, Aldeguer took the chequered flag in P7, half a second down on Granado. The Brazilian had done it again and taken E-Pole in Barcelona.

Behind the leading trio of Granado, Torres and Aegerter sits Pons at the head of Row 2, with Tulovic and Zaccone ready to pounce from P5 and P6 respectively. Aldeguer leads Row 3 from Casadei and Ferrari, with Cardelus completing a top 10 covered by 0.952. It will surely be another stunner on Sunday…

Eric Granado: “I’m feeling good, very happy with this result, it’s a new track for us so we worked a lot with the bike to understand the best setting for the circuit. I was struggling a bit yesterday and in the morning today I wasn’t at 100%. And even on the E-Pole lap I was trying to be careful and not make mistakes! Finally it was good, I’m happy with the job we’ve done but the important thing is tomorrow and we’re ready for this.”