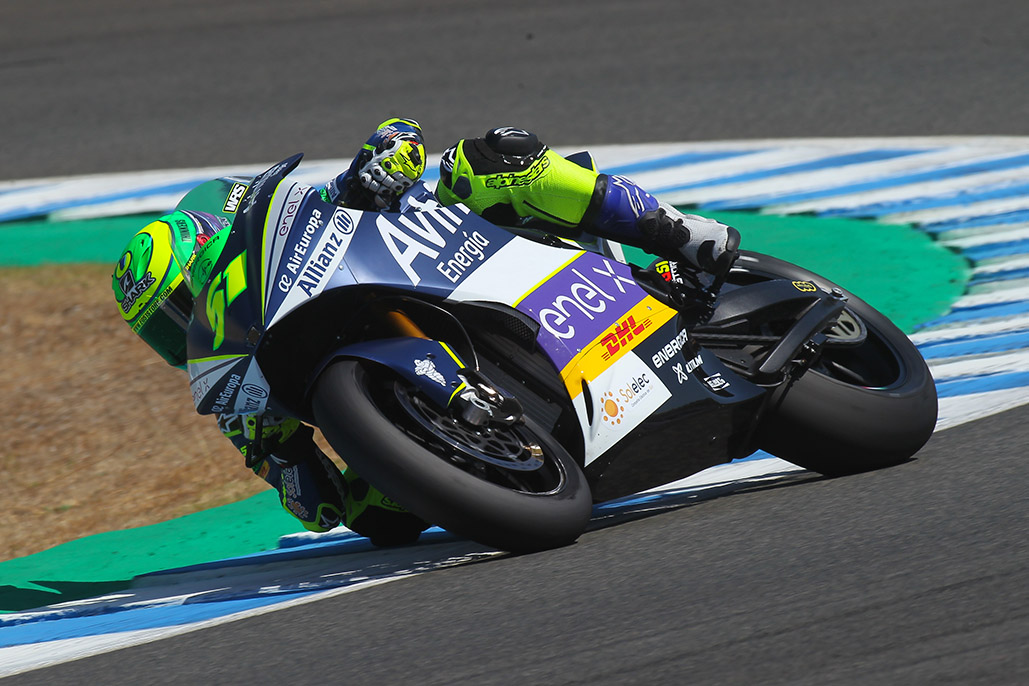 Back-to-back qualifying honours for the Brazilian see him head the FIM Enel MotoE™ World Cup grid – and race distance will be six laps.

No one has been able to stop Eric Granado (Avintia Esponsorama Racing) so far at the Gran Premio Red Bull de España, and the Brazilian retained that unbeatable record in E-Pole too – spectacularly. Granado set a 1:48.620 on his only flying lap to beat Lukas Tulovic (Tech3 E-Racing) by 0.191, with Dominique Aegerter (Dynavolt Intact GP) 0.256 off E-Pole in third. Granado was also on pole in Valencia last year, making it back-to-back Saturday success in the FIM Enel MotoE™ World Cup.

E-Pole took place in scorching conditions as the riders prepared to make their only lap count, the grid headed out in reverse order to how they finished in Free Practice. That meant newcomer Jakub Kornfeil (WithU Motorsport) was the first to put a marker down – a 1:51.012 – but faster times were being pumped in all the while, with Alex De Angelis (Octo Pramac MotoE) then putting in a low 1:49 to lead the way in the early stages. However, de Angelis wouldn’t keep P1 for long as Alejandro Medina (Openbank Aspar Team) set the first 1:48 of E-Pole to take provisional pole position.

Next, Tulovic then took the baton and went to the top of the standings. Two riders who competed in last year’s Cup couldn’t beat the rookie German’s effort either, with Xavier Simeon (LCR E-Team) and reigning Cup winner Matteo Ferrari (Trentino Gresini MotoE) going 0.2 and 0.1 seconds off respectively.

Niccolo Canepa (LCR E-Team) was then looking feisty on his lap and the Italian was setting red sectors, but disaster struck at the fast Turn 11. Canepa lost the front and slid out of contention, smashing his Energica Ego Corsa to pieces which brought out the red flags – unfortunately for Aegerter, who had just gone through the first sector at the rapid rate of knots. Canepa was rider ok, Aegerter forced to reset and go again.

Once the session was restarted, the Swiss rider was again on a potential pole lap but ultimately lost out to Tulovic by 0.065, with everything then down to one rider – Granado. Halfway around the lap, it looked like Tulovic had E-Pole in the bag as the Brazilian was two tenths off, but an outstanding third sector followed which saw Granado pull 0.2 clear. Could the number 51 rider hold his advantage in the final sector? Not all of it, but a good chunk of it – he claimed E-Pole by 0.191 to deny Tulovic a debut pole position in the electric class.

If that doesn’t tee you up nicely for the opening MotoE™ race of the 2020 season then we don’t know what will. Can anyone beat Granado on Sunday morning? Find out at 10:05 local time (GMT+2) when the electric class go into battle in Jerez!

Race distance for the FIM Enel MotoE™ World Cup in Jerez will now be six laps.

Eric Granado: “I’m very happy, I think since the test here at the beginning of the year I’ve had a good feeling with the bike and the team is doing a good job to help me feel comfortable on track, so yeah it was good. On the lap I made so many mistakes, especially in the first two sectors! But then later I was more calm and tried to do the minimum and not go out of the track, which would mean I’d start from the back, but the last part of the track was good for me and I got pole. I’m looking forward to the race for sure, the conditions were different this afternoon compared to this morning and the race tomorrow, so let’s see if tomorrow the feeling is a little better!”