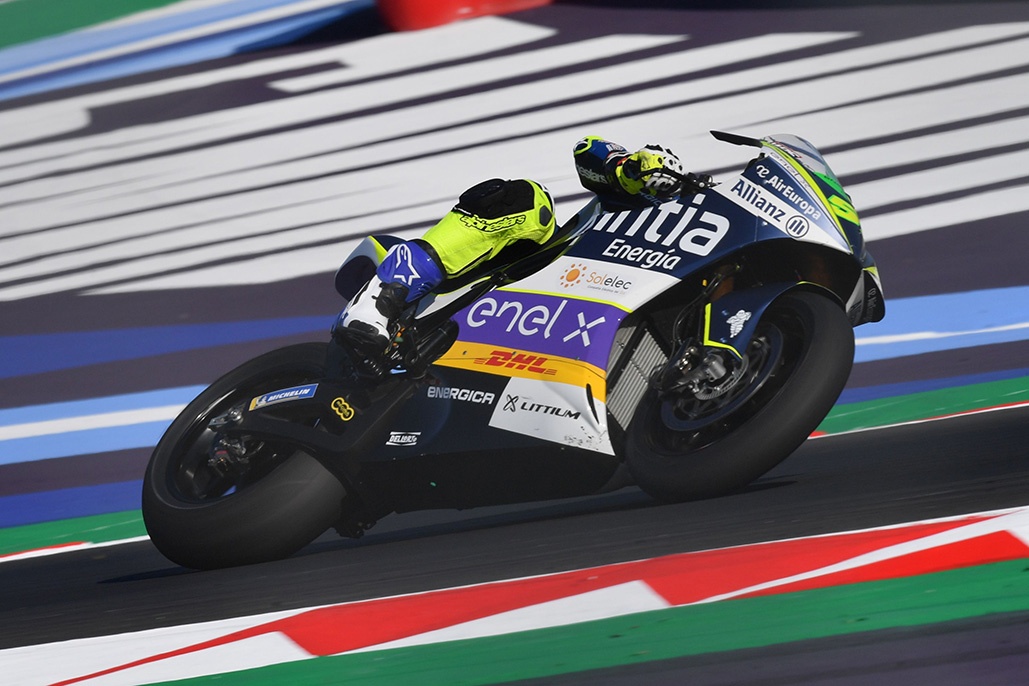 On Friday at Round 2 of the FIM Enel MotoE™ World Cup, the gap between the top two was 0.032. Fast forward to Round 3 and, incredibly, it’s exactly the same tiny margin. This time around it was Eric Granado (Avintia Esponsorama Racing) at the top, with home hero and 2019 winner at the track Matteo Ferrari (Trentino Gresini MotoE) the man on the chase. Third went the way of fellow home hero – although this time, Sammarinese rider – Alex de Angelis (Octo Pramac MotoE), with the veterans shining on Day 1 of the Gran Premio Lenovo di San Marino e della Riviera di Rimini.

Perfect sunshine greeted the grid for both sessions, although there were a few small hiccups to contend with. In FP1, both Ferrari and Mattia Casadei (Ongetta SIC58 Squadra Corse) suffered technical issues, and in FP2 there was a crash for points leader Dominique Aegerter (Dynavolt Intact GP). Nothing put too big a dent in the day’s proceedings, however, as Ferrari was second overall and Casadei P4 by the end of play. Aegerter? He still completed the top five first time out on the Energica at the venue.

Sixth went the way of Niki Tuuli (Avant Ajo MotoE) after some encouraging signs for the Finnish rider. A tougher start to the season compounded by a wrist fracture saw him off the pace we’d learned to expect from him early on in the 2019 edition of the Cup, but P6 as he returns from injury is an impressive showing in Round 3. Mike Di Meglio (EG 0,0 Marc VDS) took seventh, less than a tenth off Tuuli, with LCR E-Team taking P8 and P9. It was Xavier Simeon who came out on top in that battle of the teammates, the Belgian pipping Niccolo Canepa by just 0.023. The gap to complete the top ten was similarly tight, with Jordi Torres (Pons Racing 40) only another 0.024 in arrears in tenth – denying fellow rookie Lukas Tulovic (Tech 3 E-Racing) by 0.016. It looks set to be another mammoth melee on Sunday!

FP3 is up next on Saturday morning though, before the thriller the one-lap-dash E-Pole session at 16:05 (GMT +2). Don’t miss it as Misano World Circuit Marco Simoncelli gets ready to serve up another storm.