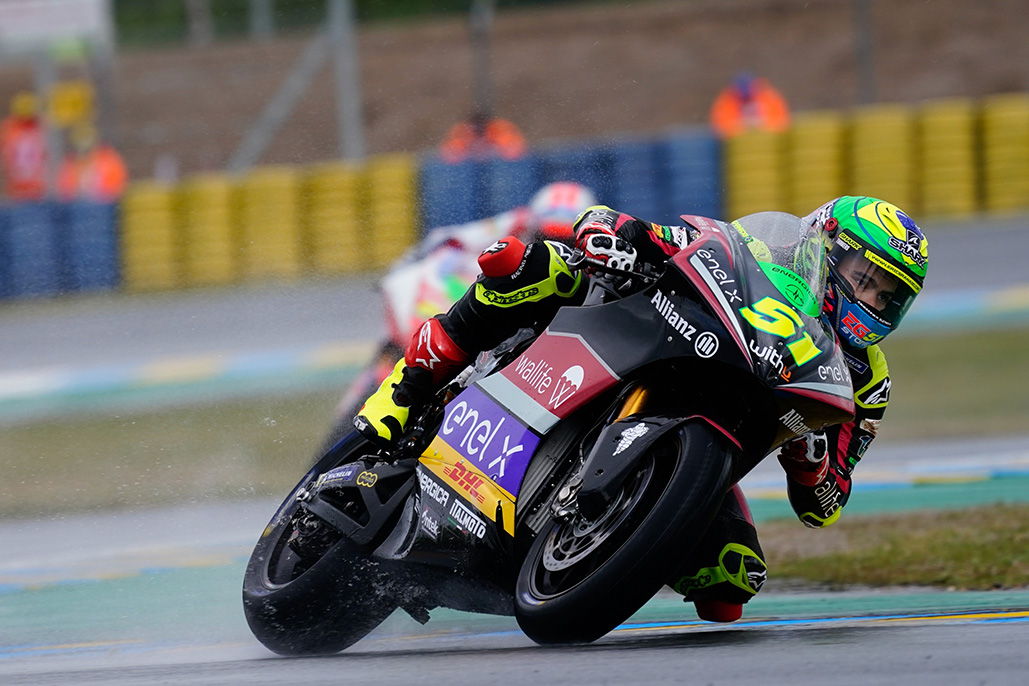 Eric Granado (One Energy Racing) is two from two on Saturdays so far in 2021, the Brazilian ultimately coming out on top in a wet, delayed and difficult E-Pole at Le Mans. If the session is declared wet it’s a maximum of six laps each, including in and out laps, with all riders on track in a shortened session. So after a delay, a number of crashes and then plenty Yellow Flag infringements, the number 51 takes it… and that despite his first MotoE™ highside! Second went to impressive rookie Miquel Pons (LCR E-Team), with 2019 Cup winner Matteo Ferrari (Indonesian E-Racing Gresini MotoE) emerging in third.

But let’s rewind back to the start. Just before most of the MotoE™ riders were about to head out, there was an almighty downpour and the Red Flags came out, with those who had headed out quickly making it back. The rain didn’t stay around long but it was certainly still wet, wet, wet on track by the time the session restarted, and it was Dynavolt Intact GP’s Dominique Aegerter’s 2:03.417 that proved the first benchmark time.

Lukas Tulovic (Tech3 E-Racing) then hit the deck at Turn 3 on his second flying lap, before Yonny Hernandez (Octo Pramac MotoE) crashed at the final corner. Granado next pulled out three seconds on his second lap to take over at the top with a real stunner, before the Brazilian was next to crash as he highsided at Turn 3. Thankfully he was back up on his feet quickly, but in the meantime rookie Pons had cut the advantage to 0.1s…

Initially it was Aegerter on top but there was post-session drama. Because of a number of crashes, a whole host of riders were having their laps cancelled for Yellow Flag infringements – including the Swiss rider. Pons and other parc ferme attendee Hikari Okubo (Avant Ajo MotoE) also had their laps chalked off, and so did fourth place Fermin Aldeguer (Openbank Aspar Team). This promoted Granado to P1, with all the other changes eventually seeing Pons hold onto P2, with 2019 Cup winner Ferrari completing the front row. The two veterans said of the drama that it’s nice to have the dice roll your way, but one day the luck won’t be on your side with the rule – and that overall, safety comes first with Yellow Flags.

So on Row 2, Xavi Cardelus (Avintia Esponsorama Racing) and title leader Alessandro Zaccone (Octo Pramac MotoE) will sit ahead of Aegerter, in P4 and P5 respectively, with the Swiss rider shuffled down to sixth.

Andrea Mantovani (Indonesian E-Racing MotoE) was another rider to profit from cancelled laps in P7 as Aldeguer slips to P8, and the 16-year-old is one place ahead of former MotoGP™ rider Hernandez. Okubo, who was in parc ferme, will be starting P10 in the end… just ahead of reigning Cup winner Jordi Torres (Pons Racing 40), who will be one rider especially eager to make short work of the start, as will Tulovic next to him.

Drama aplenty in MotoE™ on Saturday, what will Round 2 of the season bring on Sunday afternoon? Don’t forget the race is now after MotoGP™ at 15:30 local time (GMT+2), with another eight laps of stunning competition primed come rain or shine.

Eric Granado: “I’m ok, fortunately, I’m ok although it was a big crash! Finally the pole position came, to be honest… this is the rules and it had to be like this, but it’s good for me. My first highside on these bikes but happy I’m ok and ready for tomorrow.

“The feeling was very good, all weekend I had a good feeling in the dry and it was the first time in the wet with my new team. To be honest the setting wasn’t perfect, especially for the rear and I was struggling from the beginning. It was sliding a lot from the first touch of the gas, then I tried a bit of a different line and speed to improve…and crashed! It was good it was in wet E-Pole and I could do more than one lap, even if I crashed it was still enough for me to have a classification. If I crashed with just one lap it would have been very bad for me! So I’m happy, and confident for tomorrow. If it’s dry or wet, we’re ready.”