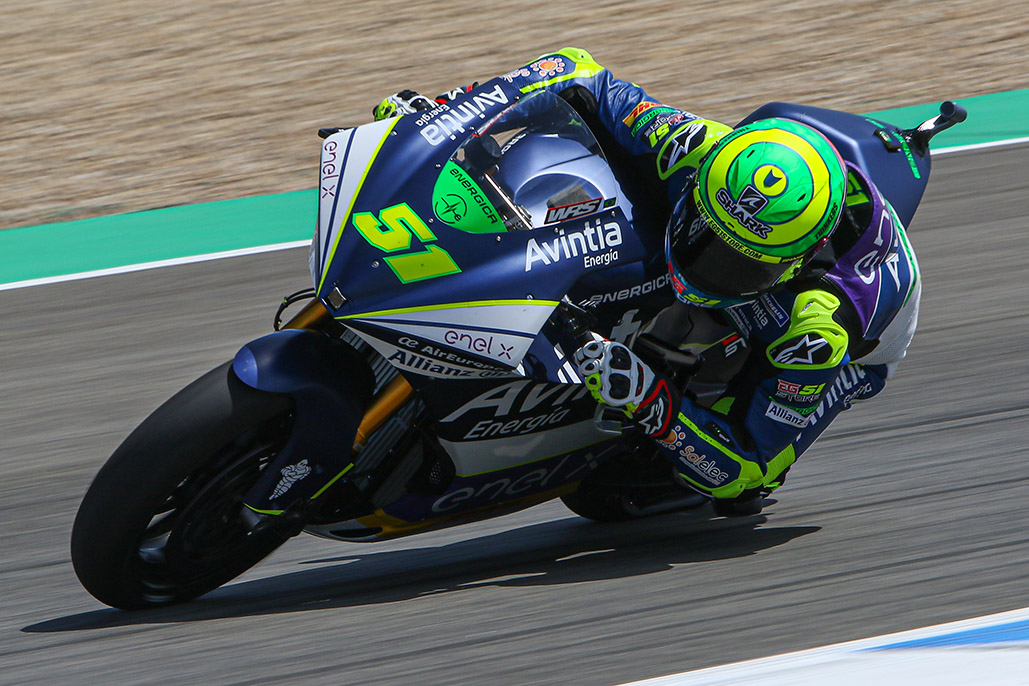 The Brazilian goes fastest on Friday despite a crash, with the Swiss rider slotting into second.

Despite only completing two laps in FP2 and suffering a crash at Turn 2, Eric Granado (Avintia Esponsorama Racing) took charge of the FIM Enel MotoE™ World Cup timesheets on Day 1. Only four riders improved in FP2 at the Gran Premio Red Bull de España in the hotter temperatures, with rookie Dominique Aegerter (Dynavolt Intact GP) and Niccolo Canepa (LCR E-Team) keeping their positions in the top three thanks to their FP1 efforts.

It was a good day of running as the first race and E-Pole of the year appear on the horizon, although unfortunately for Alessandro Zaccone (Trentino Gresini MotoE), the rookie has decided to sit out the weekend’s action after feeling the effects of his testing crash on Wednesday. The rest of the field, however, took the opportunity to do an E-Pole simulation on Friday afternoon in FP2, with time attacks coming in thick and fast to test out the conditions at a similar time of day to the qualifying session on Saturday afternoon.

Granado and fourth on the timesheets Xavier Simeon (LCR E-Team) did manage to go slightly better in FP2, as did Maria Herrera (Openbank Aspar Team) and rookie Jakub Kornfeil (WithU Motorsport) despite the scorching temperatures. However, that didn’t change the overall look of the combined timesheets as Granado simply increased his advantage slightly, with Aegerter second and Canepa third.

Tomorrow there’s another practice session for the pack to shuffle, and then it’s time to decide the grid for Round 1. The awesome one-lap-dash E-Pole session begins at 16:05 (GMT +2) – don’t miss it!