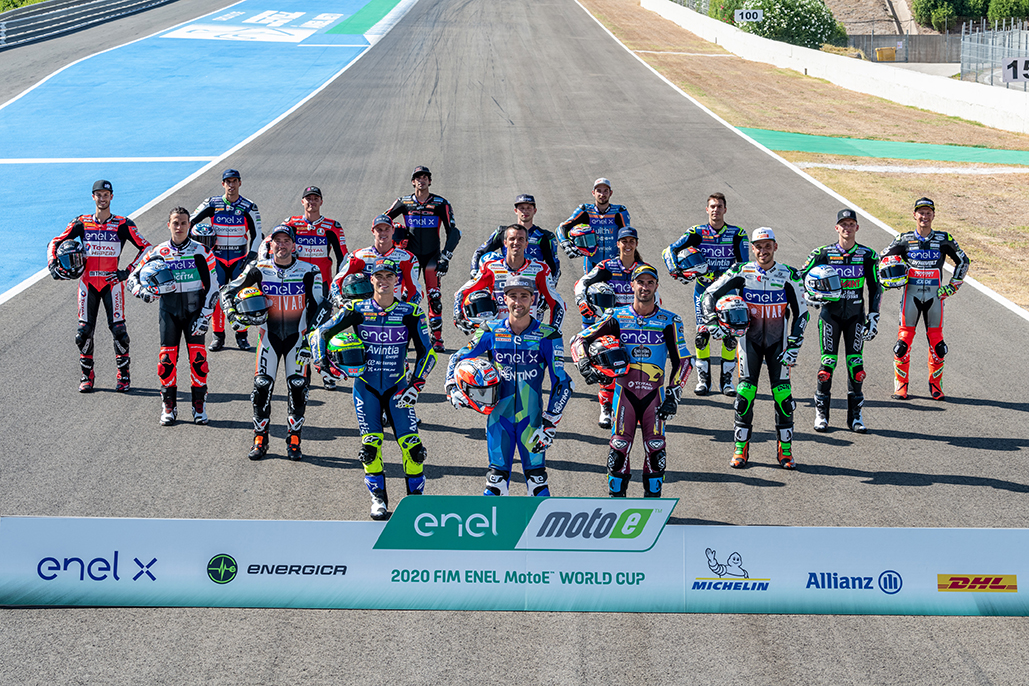 Nicolas Goubert spoke first, detailing some of the new things we have on track in 2020.

“It’s been a long wait but we’re very happy to be here and start with a calendar that has the same number of events that we’d planned initially. A bit of a change with the dates but the same number of races; five events and seven races, which is really good!

“Regarding the novelties we have, of course the evolution of the bikes… Energica did a great job improving the torque on the bike, the torque on the engines, which is already quite high, even higher today; 10% more in the low rev range. We have a better cooling system, which we need especially with the temperature we have this week in Jerez. On the suspension side we have worked with Öhlins on the front fork setting because the guys were wanting, last year, a slower dive on the front end of the bike with the heavy braking, and when they did the testing in March with the new setup, they were happy. And, as well, we have something very important from Michelin; they’ve worked on the tyres, the front tyre has got a new compound to give more grip in the braking area, and a completely different rear, with a different profile, different construction – a tyre coming from MotoGP™. But the important thing from Michelin is that they brought sustainable technology with material that they can either recycle or are sustainable, so that’s a very big step for them and for us, it’s the first time they’re using that in race and the riders were very happy with the new tyres they test in March. There’s even another evolution since March in the rear because Michelin wasn’t completely happy with what they had done before and they’ll tell you what it feels like.”

And what about the level of competition?

“It was a positive point from last year: we had very interesting races with a lot of fights and, looking at the timesheets from yesterday, we have out of the 18 riders, eight new ones but already, out of the new ones, there are already some among the fastest! So surely they’ll be fighting with the others very quickly and that’s very good news.”

There was also one update on Alesandro Zaccone (Trentino Gresini MotoE), who crashed unhurt on Wednesday in testing, to clear up the consequences of the crash for the bike involved.

“Alessandro suffered a high-speed crash. Fortunately he’s not injured, so he’ll be riding tomorrow. That’s a positive thing. because it was a high-speed crash we were a bit worried about the state of the bike so the Energica guys went to check it and the battery case had not suffered any damage, so we brought the bike back to the paddock and we put it in the safe area and nothing happened; no fire, nothing compared to what we had more than one year ago here!”

Next it was time to hear from the riders, with reigning winner Ferrari first up. After thanking the people involved in making the event a reality – as did all the riders – the conversation moved to the race weekend ahead.

“I’m happy to start the championship, starting with a lot of pressure is different compared to last year, but we did a great test yesterday – and also in March – so we are fast and I only have to focus on myself. I have to improve my riding style and I have to understand the new tyres and the new front fork, but I’m happy.

“Three races in Misano will be fun, but every time it’s different, every year is different; this year we have eight new riders, so every race you can see different fast riders, like Dominique yesterday, so we’ll keep focused on our goal and, of course, the consistency, which is important in a short championship.”

Next was Granado, double winner to end 2019 – and third overall last year. He was also near the top in testing on Wednesday.

“I was happy with my job yesterday, we did the day step by step, improving the feeling on the bike and I’m feeling good, I have the good momentum from last year. Like Matteo said, every weekend will be different, so we need to do our job. I’m very happy with the job that my team is doing, so I’m ready for the year. This year my target is to be more consistent, last year was like a rollercoaster for me, so I hope to stay on top and fight for the title until the last race.

“We need to look at every rider. We’re starting from zero, so every rider can be on the top. For sure, Domi did a great job and adapted quickly in the test, but all the other riders are getting faster too and the ones coming from last year have more experience now, so I think it will be a very tight championship and all the riders can be on the top. It’s a very fair category, we’re all on the same bikes, so it depends on the rider. I will try to do my best and let’s see what happens.”

Simeon spoke next, the Belgian rider having moved to the LCR E-Team this year, and he’s another looking for consistency – and has an extra complication from his two duties in 2020…

“I’m happy to be here! Yesterday the test was quite good, we didn’t forget how to ride and bike and this is quite positive! I changed team, I feel really at home in the new team already, Lucio and the team made me very welcome, and the guys are very professional. We’re still competitive and I hope I will be more competitive than last year and more constant.”

The end of last season saw a challenge for Simeon after an injury in Endurance, and it seems the new season and changes to the calendars has created another…

“Fortunately the injury I had from Endurance didn’t make me feel like I had less power in Valencia, I could ride at 100%. But this year the problem I will have is that I have also the Endurance championship because of the situation with Covid, one of the races clashes! I will have to make a decision which race I want to do. We’ll have to see in the season which decision to make, but the most important thing is to fight for the victory every race and try and fight for the title at the end.”

Alex de Angelis, on pole in Misano last year and making some big steps forward throughout the year, was next to talk. Now heading into Jerez with that improved form and experience, how is he feeling?

“In Misano last year I made a big step compared to the races before, and I don’t think just because it was my home race, also because the team worked very well and finally I could find the feeling with the bike. Finally I got pole, and then in the race I was maybe too fast and wanted to win too much and crashed! Since that race we’ve always been fast. And I think the new things that Energica brought, and Michelin, and Öhlins, everything is working well for me. In the test I felt fast and comfortable, I can overtake, change line, I feel confident and I’m smiling every time I go on the track, and this is the best thing that can happen to a rider.”

The Sammarinese rider also thinks the competition will be tough this year.

“I think this season the level will be crazy. We started in March and the laptimes were very fast, so it means everything is working perfectly and the riders are pushing, and it’s not only about the experience because the last one to arrive is going even faster! People from home have to watch MotoE because they will definitely have a lot of fun watching us.”

Finally, rookie Dominique Aegerter – although a very experienced rider outside MotoE™ – took to the mic. The Moto2™ Grand Prix winner was quickest in the test on Wednesday, and by an impressive margin. Is he feeling ready?

“At home I couldn’t do so much than MX and physical training, but we were happy to ride in March and get some info from the bike then, and yesterday the test went very well! We managed to set the bike up good in the hot conditions. For me the bike is still new and the weekend will be new, but I have a lot of experience so we’ll see how it goes. For sure the E-Pole will be something special with one lap qualifying, and yeah we’ll try to do a good job!”

“The behaviour of the throttle is very different to a fuel bike, no clutch, no gears, it’s bit strange how to start! I was a bit nervous how it goes but we did the practice start yesterday and for me it was going well. Let’s see how it goes on Sunday!”

We shall indeed. Tune in for E-Pole on