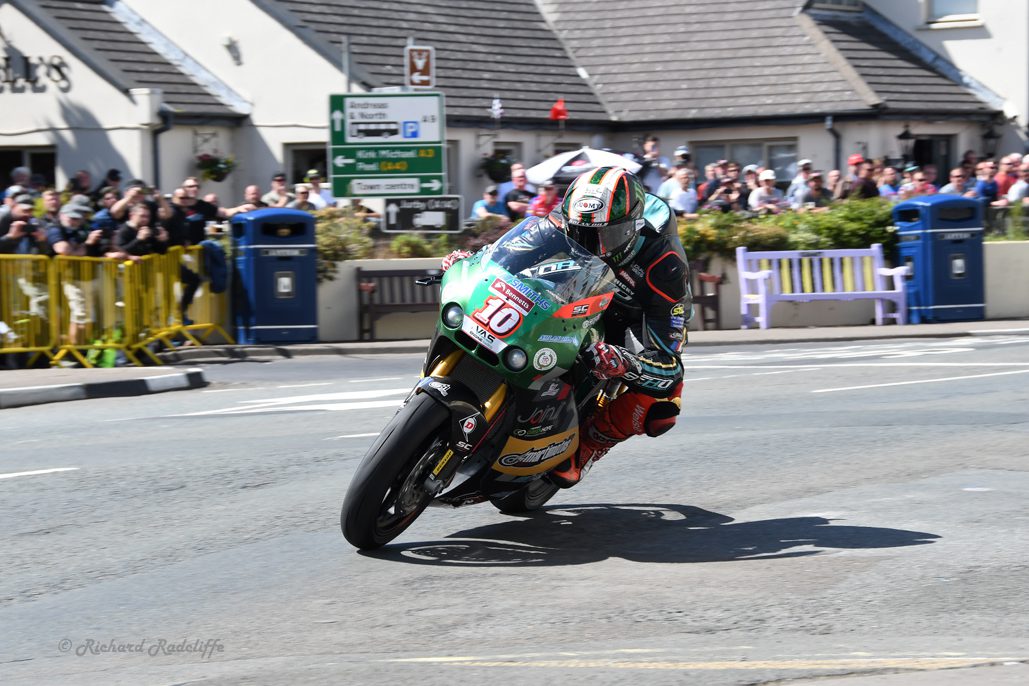 The Bennett’s Supertwin Race may have been reduced to three laps; but this did not reduce the excitement. For over two laps we had a fluctuating duel between Peter Hickman and Michael Dunlop who were riding identical Paton S1-R machines. There was never more than 1s between them as they fought for the winner’s laurels. The duel ended when Dunlop had mechanical problems that obliged him stop to check the machine at Laurel Bank. He continued; but was black flagged out of the race at Sulby Bridge. The race was notable for the emergence of some young stars of the future.

MGP winner James Chawke was a non-starter and former Irish Champion Brian McCormack’s race was over after less then two miles. Maria Costello was another to take a very early bath. Lee Johnston, Ashcourt Aprilia, had left his machine close to standard; preferring reliability over outright pace; this proved to be a wise choice.

The race was held in dry, sunny conditions; however, a strengthening wind made the mountain climb and Mountain Mile very challenging; with some unable to pull top gear. Jamie Coward; runner up in 2019; was first away on the KTS Kawasaki. Riders from the earlier warm up session had reported the track to be mostly dry; Governor’s Dip and Ramsey Hairpin being the only damp areas.

At Glen Helen on the first lap Dunlop led by 0.8s from Hickman. Coward was 0.9s behind Hickman; young star James Hind (Paton) was 3.28 behind Coward. Lee Johnston and another young star, Pierre-Yves Bian (Martimotos Paton S1-R) completed the initial leader board. Hickman was fastest on the run into Ballaugh and led by 0.85s as they hopped over the bridge. Coward was 5.26s behind Coward and 5.4s ahead of Hind. Johnston and Bian completed the top six.

There was a fairly large crowd gathered around Parliament Square in Ramsey to watch the action unfold. Jamie Coward was the first to burst into the sunlit square and take the right and left hand bends before powering away to face the rising bend at Cruickshank’s. The road surface in the square is far from ideal and the bump on the exit is need of urgent attention. Johnston was next and he had already taken the starting gap and more out of Stefano Bonetti (Aprilia). The action provided good entertainment for the crowd; Dunlop was a little wide on the left hand bend but in general all were on the racing line. Hind was going really well and had taken the staring interval of 10s from Rob Hodson.

As they crossed the timing beam at 400m up the road it was Hickman was who led by 0.68s. Coward remained in third, 7.2s behind, with Hind now 11.6s further back and being closed down by Johnston. Unusually, Hickman was not fastest on the mountain climb; Dunlop led by 0.81s as they crossed the tram lines; flicked right and powered away to Brandywell. The end of the lap saw the mandatory pit stops; everyone had to enter their pit and stop; even if they did not put in any fuel; however; the vast majority chose to do so. At the pit entrance Dunlop led by 0.7s from Hickman. Coward was third; Johnston, Hind , and Bian completed the leader board. Coward had the fastest stop; Johnston the slowest; whilst Hickman’s and Dunlop’s were just 0.1 apart, in favour of Hickman.

At Glen Helen it was Hickman who led by 0.67s; with Coward third, 16.9s further back. Just 3.5 miles up the road Coward was out with mechanical problems. This promoted Johnston to the final podium place and Paul Jordan (Prez Kawasaki) to the final leader board place. Jordan had a lucky escape when he hit a bird during practice and still has a black eye to show for it. At Ramsey, the lead was back with Dunlop; he had 0.85s in hand as he swept out of the square. They had a gap of over 1 minute from Johnston who was pulling away from Bian and Jordan.

At the Bungalow the lead was 0.46s; at the Grandstand, as the last began Hickman led by 0.56s after a lap at 118.53mph (including the pit stop). As we awaited the timing beam being broken at Glen Helen to be broken it was reported that Dunlop had stopped to make adjustments at Laurel Bank. He made it to Glen Helen, but his chance of victory had gone; the clock showed him to be 57.2 down on Hickman. His race was over when he was black flagged at Sulby Bridge.

Johnston was promoted to second by Dunlop’s demise. At Ramsey, Hickman pulled a nice wheelie for the crowd; he led by 96s; Johnston had a comfortable advantage of 26.4s over Jordan. Bian was safe in fourth; Rob Hodson and Michael Rutter were 1.2s apart in the battle for fifth. There were no problems for the leading riders and Hickman took a well-deserved victory. He was delighted to win but would have preferred to have battled Michael to the finish. Johnston took second and Paul Jordan took his first TT podium for the local Prez team. The hugely impressive Bian took fourth; veteran Michael Rutter took fifth by 1.6s. James Hind nursed his machine home to take seventh; but it could have been a podium if the machine had behaved itself.  Jo Loughlin, in his debut race on the Mountain Course, was holding nineth in the early stages but retired at the end of the lap. He impressed in practice and is another young man who seems set to be a star in the coming years.

Rain later ensured that the Supersport Race 2 would have to be postponed for one day.