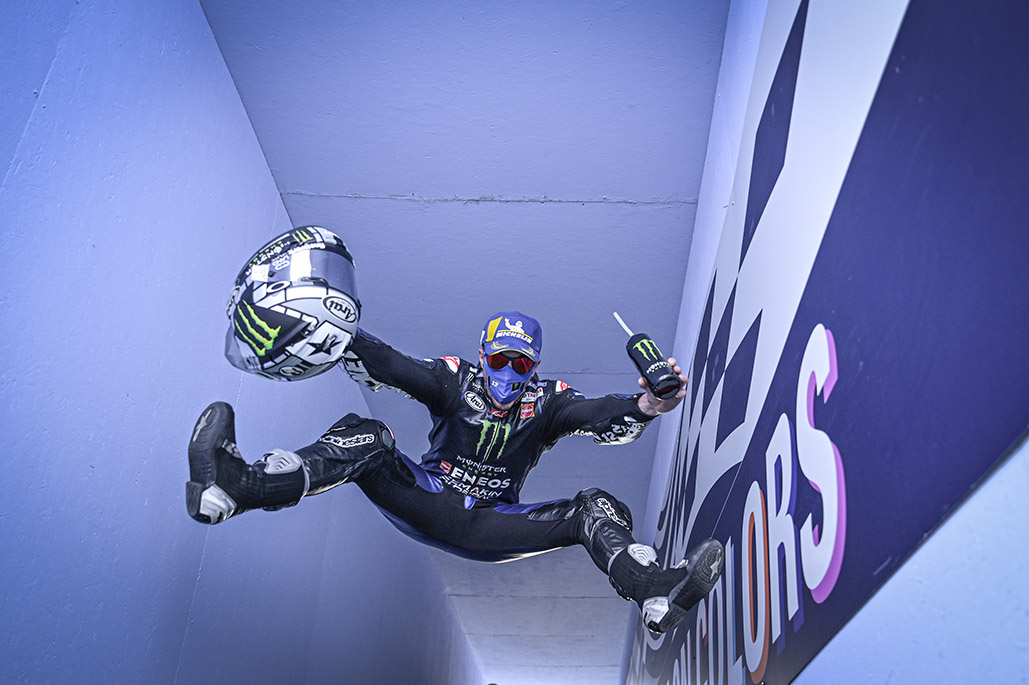 ‘Top Gun’ hits the bullseye to become the sixth different winner of the season, Mir slices through to second and Pol Espargaro completes the podium after late drama for Quartararo – and some heartbreak for Bagnaia.

The season began pretty well for Maverick Viñales (Monster Energy Yamaha MotoGP) in Jerez as the Spaniard took two podiums and a solid haul of points, but after a tough race in Brno, a dramatic Austrian GP and then a high-speed bailout in Styria, ‘Top Gun’ arrived at Misano poised to hit back. Last weekend it didn’t quite go to plan, but take two in the Gran Premio TISSOT dell’Emilia Romagna e della Riviera di Rimini saw everything fall into place as the Spaniard seared his way to his first win of the season and catapulted himself to within one point of the Championship lead. He also becomes the sixth rider so far to stand on the top step in 2020.

Viñales broke clear early on, lost out to Francesco Bagnaia (Pramac Racing) and then started to haul the Italian back in, the number 12’s tactics readying us for a crescendo at the front. Heartbreak then hit for Bagnaia as the Italian crashed out, however, Viñales sweeping through and keeping it inch perfect to the flag for those invaluable 25 points. Joan Mir (Team Suzuki Ecstar) sliced through from P11 on the grid for another stunning podium in second, with more drama just behind him as Pol Espargaro (Red Bull KTM Factory Racing) took third back from Fabio Quartararo (Petronas Sprinta Racing) as the latter was given a time penalty for exceeding track limits and failing to complete a Long Lap Penalty.

As to be somewhat expected, Jack Miller (Pramac Racing) got a great launch from P2 to grab the holeshot as the lights went out, with polesitter Viñales slotting into second, Quartararo initially holding onto P3 and Bagnaia making up a place to get past Pol Espargaro. Viñales didn’t take long to take the lead though, the Spaniard up the inside at Turn 4 to mug Miller as Pecco had a very close look at getting past Quartararo at Turn 8 – although there was no way through for now.

Meanwhile at the front, Viñales had a 0.9 second lead over the line as the riders clocked onto Lap 2, but fortunes were flipped for his teammate Valentino Rossi (Monster Energy Yamaha MotoGP) as the ‘Doctor’ was soon out of his 250th Grand Prix with Yamaha. Down at Turn 4 and home podium dreams over, Rossi remounted but had a big ask on his hands to score points.

In the meantime, Bagnaia had got past teammate Miller for P2 and Brad Binder (Red Bull KTM Factory Racing) had charged through to third at Turn 10 but it sadly didn’t last long; the South African down at Turn 14. Bagnaia up ahead, however, was unleashing the fastest lap of the race as the Italian locked his radar firmly onto the back of Viñales’ YZR-M1, edging closer as Pol Espargaro started to do the same to him…

Bagnaia was right on Viñales on Lap 5 and by then, the duo were once again pulling away from Pol Esparagro and Quartararo, who was tucked in behind the number 44. Bagnaia set another fastest lap of the race – a 1:32.3 – and it seemed game on, with Viñales then slightly wide at Turn 4, opening the door. Bagnaia needed no second invitation and the Italian took the lead, then immediately half a second clear, although it subsequently stayed pretty constant at 0.6 seconds for a number of laps…

Behind that chess match, Mir had managed to get to the front of the battle for the lower ends of the top 10 and get some clean air in front of him – although the gap to Quartararo and the podium was 3.5 seconds on Lap 7. The top two pounded on, Bagnaia started to edge away, and Mir kept chipping away behind.

As the laps went on, the Suzuki edged closer and closer as Bagnaia stretched his legs. Not long after though, it started to turn as Viñales chipped back a tenth and then two, with the lead back down to just over a second and the last few laps looking set to cook up a storm. By that time, Mir was also under two seconds away from the podium fight but with seven to go, huge drama then unfolded. Turn 6 was the place and Bagnaia the rider, the race leader sliding out in some late heartbreak as Viñales shot past. The number 12’s lead was over four seconds then – with no one else having been able to stay near the leading duo.

The fight for the podium was then the focus. Quartararo was showing a wheel to Espargaro but the latter was defending brilliantly on his KTM… before Joan Mir finally appeared on the scene. 0.6 faster than the duo ahead of him with six laps to go, it was soon a three-rider dog fight for the remaining two spots on the podium. And also with six laps to go, Quartararo was handed a track limits warning – something that would prove to be costly for El Diablo shortly after.

With three to go, Mir struck. Turn 2 was the spot as the Spaniard shot through underneath and past Quartararo, and it wasn’t long before Mir was up to second as well. On the next lap at Turn 1, Mir was past Espargaro’s KTM and back into clear air. Quartararo then pounced on Pol at Turn 3 as well, Espargaro going from P2 to P4 in a matter of corners. It seemed that was that for the podium fight too, but there was one last shot of drama.

For exceeding track limits too many times, Quartararo was then handed a Long Lap Penalty. His only time to do it? The the last lap. Would he see it? He was just over a second clear of Espargaro and four seconds ahead of fifth place Miguel Oliveira (Red Bull KTM Tech3), so it looked like he was going to lose P3…

Ahead on track, Viñales didn’t have any such troubles. ‘Top Gun’ rounded the last corner to take his first victory since the 2019 Malaysian GP in fine style, taking 25 vital points and moving to within one point of the top. Mir crossed the line a magnificent second to take his third rostrum in four races, and Quartararo took the chequered flag in third… but hadn’t taken the Long Lap. He was therefore demoted to P4 as it became a three-second penalty instead, handing Pol Espargaro his second podium of the season.

Behind Quartararo classified fourth, Oliveira was stunning in the second half of the race to finish P5, the Portuguese rider had serious pace but starting P15 ultimately cost the Styrian GP winner. The leading Honda across the line was Takaaki Nakagami (LCR Honda Idemitsu) in P6 as the Japanese rider showed strong late-race pace to get the better of Repsol Honda Team’s Alex Marquez in seventh. The reigning Moto2™ World Champion produced his best MotoGP™ ride to date, finishing seven tenths away from Nakagami.

So where’s Dovi? The man still leading the Championship had a tougher day at Misano, but with Quartararo finishing fourth and that very points leader Andrea Dovizioso in P8, it’s the number 04 still ahead. Viñales is now level on points with Quartararo but technically behind him as he has less wins, with Mir now just four points from the title leader – madness!

Iker Lecuona (Red Bull KTM Tech3) crashed out of P6 with two and bit laps to go after stringing together a fantastic race, Rossi pulled in with 12 laps to go after his crash, and Miller encountered issues early on that he later revealed had seemingly been caused by a visor tear-off blocking the air filter. Tito Rabat (Esponsorama Racing) crashed at Turn 1 on Lap 12 – rider ok.

Four riders, four points. That’s how it stands at the top of the MotoGP™ World Championship after the Misano double-header: Dovizioso, Quartararo, Viñales and Mir the quartet leading the way. But this is 2020, and this is MotoGP™ – it could all change in the blink of an eye! With Barcelona coming up in less than a week’s time, we don’t have to wait long to witness more unrivalled premier class action… so come back for more!

Maverick Viñales: “Amazing, amazing job this weekend, we prepped really well for the whole race. Pecco was really fast! I was pushing a lot, I was trying to save a bit of tyre for the last ten laps, and then I started to push. I thought I was catching him, but then when he made a mistake I just tried to not crash, take the maximum points and wow. Fantastic, I’m really happy, my mentality is the same as the last weekend and last races, but we found a little bit better setup for the 20 litres at the beginning of the race. I made a mistake at Turn 4, I was pushing a lot at the beginning trying to open the gap – if were were only two riders it was good. I want to say thank you to all the people supporting me at home, because they know there have been tough times, but it seems it’s passed, now we have good luck and this is what counts! I’m very happy, I appreciate all the work and we need to continue like that, pushing very hard. We can have a lot more potential!”