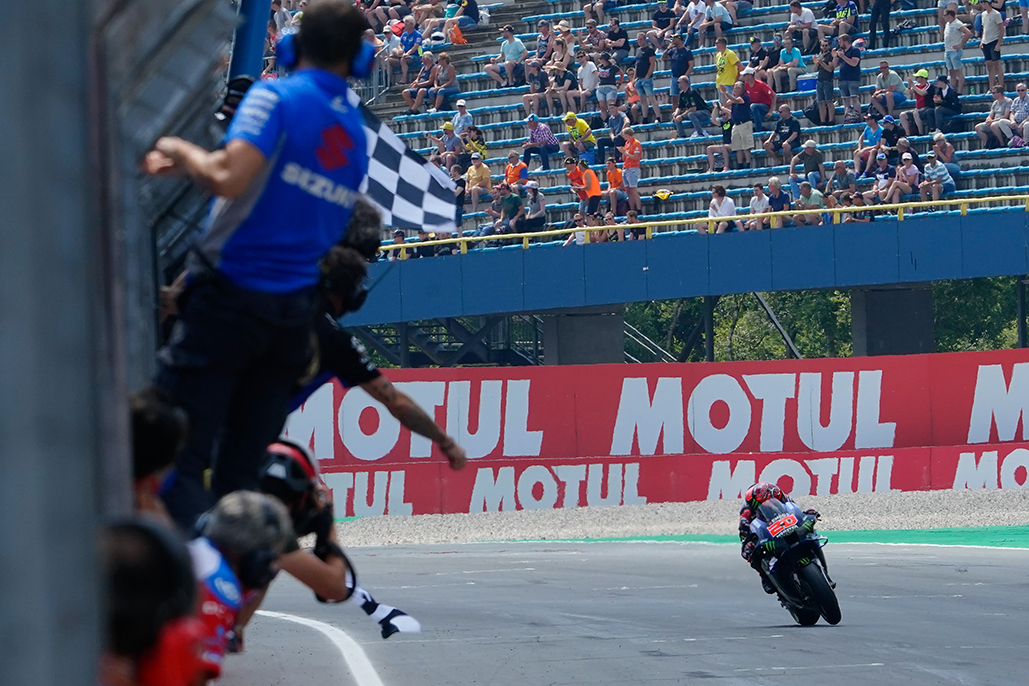 The Frenchman pulls the pin to reverse the Yamaha 1-2 on Sunday, with Mir slicing through to third

Fabio Quartararo (Monster Energy Yamaha MotoGP) pitched the tactics to perfection in the Motul TT Assen to come out on top, heading a Yamaha 1-2 ahead of teammate Maverick Viñales as the two Iwata marque machines pulled the pin once again on Sunday. The duo also push the factory past the milestone of 750 podiums, with Yamaha now counting on 751 with two riders on the rostrum at Assen. Reigning Champion Joan Mir (Team Suzuki Ecstar) completed the podium, slicing through from 10th on the grid.

Quartararo took the holeshot from second, but the Frenchman wasn’t allowed to escape early as fellow front row starter as Francesco Bagnaia (Ducati Lenovo Team) went for a Lap 1 leap at Turn 8. It was close between Quartararo and Pecco, their exits compromised, with that allowing Takaaki Nakagami (LCR Honda Idemitsu) up alongside the pair as Quartararo ran hot into Turn 9. Bagnaia said thank you very much, the Italian through to lead and holding station – for now.

Quartararo went for a move at the final chicane to answer back but was wide, and Bagnaia got his GP21 stood up and blasted back past. That happened again on Lap 6, before Lap 7 saw Quartararo grab P1 through Turns 12 and 13. How crucial was that going to prove? Meanwhile, Nakagami was still holding Viñales at bay, with Johann Zarco (Pramac Racing), Mir and Miguel Oliveira (Red Bull KTM Factory Racing) line astern right behind.

Two 1:32.8s saw Quartararo stretch a 1.2 lead to Bagnaia on Lap 9, hammer down. On Lap 11, that gap was up to 2.5 as Bagnaia had to switch focus to keeping Nakagami behind him. The Japanese rider passed the Ducati rider on Lap 11 through the rapid kinks, but Bagnaia grabbed P2 back down the front straight. Viñales, Zarco, Mir and Oliveira were all waiting in the wings and there was a copy paste of Nakagami vs Bagnaia a couple of laps later. Drama hit then though as the number 63 was handed a long-lap penalty for exceeding track limits.

On Lap 15, there was plenty of action. Bagnaia dived into the long-lap penalty loop, and then teammate Jack Miller crashed unhurt at Turn 5. Nakagami was sat up by Mir at the same corner and it was now Viñales in second place, four seconds behind runaway leader Quartararo. Mir was then up past Zarco at Turn 5 with eight laps to go into third, with Oliveira around half a second away back on the Pramac rider, in fifth.

At the front, the gap came down to 2.5 with two laps to go between Quartararo and Viñales as the latter seemed quicker, but after too much lost ground no one had an answer to El Diablo at Assen. A fourth 25-point haul of the season extends his Championship advantage to 34 points heading into the summer break. Viñales delivered impressive late-race pace on the front soft tyre, but it wasn’t enough to reel in Quartararo. Nevertheless, after finishing last at the Sachsenring, P2 for the Spaniard is a splendid effort as the number 12 returns to the podium for the first time since his Qatar GP win. Mir kept his powder dry ahead of Zarco to secure third, the podium also his third of the season.

Zarco was forced to settle for fourth ahead of Oliveira in fifth, with a real battle deciding sixth just behind. Marc Marquez made a stunning start from 20th on the grid to gain ten places in what seemed like the blink of an eye, and he hustled on to the back of Bagnaia after the Italian’s Long Lap penalty. The eight-time World Champion couldn’t quite find a way past, although he was within 0.075 over the line as Bagnaia held on for sixth. Aleix Espargaro (Aprilia Racing Team Gresini) took eighth, with Nakagami disappointed with ninth after an early podium challenge and Pol Espargaro (Repsol Honda Team) completing the top ten.

11th went to Alex Rins (Team Suzuki Ecstar) despite a run off for the number 42 following contact early in the race with Johann Zarco, with the Suzuki holding off Brad Binder (Red Bull KTM Factory Racing) as the South African got his first taste of Assen on a MotoGP™ bike. Danilo Petrucci (Tech3 KTM Factory Racing) took 13th, ahead of Alex Marquez (LCR Honda Castrol) – another debuting at the track in the premier class – as was rookie Enea Bastianini (Avintia Esponsorama), who completed the points.

Valentino Rossi (Petronas Yamaha SRT) crashed out fast at Turn 7 but rider ok, Miller went down at Turn 5. He rejoined but then had to stop with a mechanical problem. Iker Lecuona (Tech3 KTM Factory Racing) also crashed, and Jorge Martin (Pramac Racing) was forced back into pitlane with an issue.

Now it’s time for summer break and a reset, with a double-header at the Red Bull Ring up next at the start of August. Quartararo heads in with another win and a sizeable advantage at the top, but can anyone hit back in the second half? Join us for the Styrian Grand Prix from the 6th to the 8th of August.

Fabio Quartararo: “I trained with the ball a little bit higher all the days but this one was tough. Was really tough race, I was struggling so much to overtake Pecco. I struggled a little bit all weekend with my right arm, and in the race, I could have gone three or four tenths faster every lap, but I was feeling really bad and, at the half race I was a bit scared, but I kept the pace and I can be happy because with the battle with Maverick on Saturday, he won, but the points arrive on Sunday so I am so happy.”