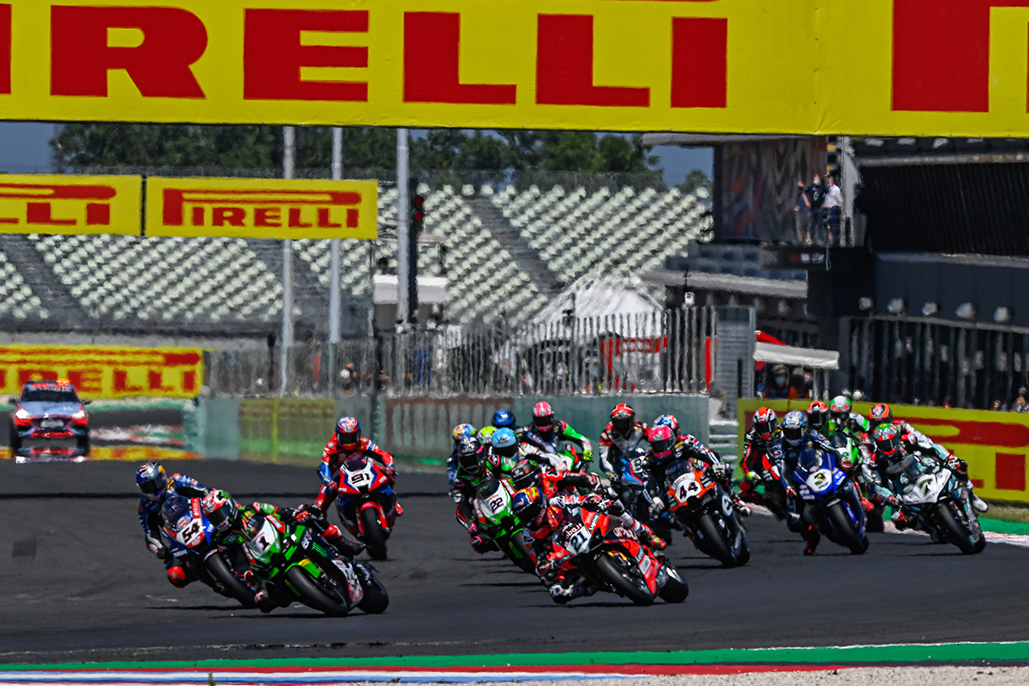 In front of fans for the first time in 2021, local hero Michael Ruben Rinaldi claimed his first victory on the factory Ducati

The action kicked off almost immediately at the Misano World Circuit “Marco Simoncelli” for the Pirelli Made in Italy Emilia-Romagna as Michael Ruben Rinaldi (Aruba.it Racing – Ducati) claimed an emotional victory in front of fans in the MOTUL FIM Superbike World Championship to claim the second win of his career, and the first on the factory Ducati.

Michael Ruben Rinaldi got a superb start as the lights went out to start the race, first passing Toprak Razgatlioglu (Pata Yamaha with BRIXX WorldSBK) as well as teammate Scott Redding, before sweeping around the outside of Turn 1 on reigning Champion Jonathan Rea (Kawasaki Racing Team WorldSBK).

Rinaldi resisted all pressure from the six-time World Champion Rea in the first ten laps of the race, with the gap fluctuating up to a maximum of half-a-second but with Rea not able to even consider making a move on the race leader. It was a similar story throughout as the two riders looked to apply pressure to each other.

The pressure would eventually pay off for Rinaldi when Rea made a rare mistake at Turn 1, having to save a massive slide on his ZX-10RR; Rea was able to stay on his machine but lost time to Rinaldi as well as second place to Razgatlioglu, the pair around four seconds behind home hero Rinaldi. It meant Rinaldi became the first Italian winner at Misano since Marco Melandri in 2017. Rea’s podium meant he claimed his 150th podium with Kawasaki, while it was Kawasaki’s 350th race on the podium.

It meant the podium would finish with Rinaldi claiming a maiden factory Ducati victory after a difficult start to the 2021 season with his new team, with Razgatlioglu and Rea completing the podium. Redding, who initially tried to grab the lead in the opening corners of the race, was not close enough to Rea to take advantage of his error.

Alex Lowes (Kawasaki Racing Team WorldSBK) claimed fifth place on his Kawasaki ZX-10RR, just finishing ahead of Team HRC’s Alvaro Bautista after the Spanish rider showed strong pace throughout the weekend. Less than a second behind was rookie and the youngest rider on the grid, Axel Bassani (Motocorsa Racing), with Tom Sykes (BMW Motorrad WorldSBK Team) in eighth. Bautista, Sykes and Bassani engaged in a titanic three-way battle for sixth place, with Sykes holding on until the penultimate lap of the race.

Italian rider Andrea Locatelli (Pata Yamaha with BRIXX WorldSBK) claimed a ninth-place finish after a quiet but solid race battling his way up the order, finishing ahead of the rider he replaced at Pata Yamaha as Michael van der Mark (BMW Motorrad WorldSBK Team) completed the top ten.

After a strong Tissot Superpole session, Lucas Mahias (Kawasaki Puccetti Racing) came home in 11th place while Garrett Gerloff (GRT Yamaha WorldSBK Team) battled from the pitlane, starting there after being sanctioned for a crash with Rinaldi at Estoril, to finish in 12th place. Kohta Nozane (GRT Yamaha WorldSBK Team) and Leon Haslam (Team HRC) engaged in a battle for the majority of the second half of the race, with the Japanese rookie coming out on top in that battle; Nozane finishing 13th and Haslam 14th. Tito Rabat (Barni Racing Team) completed the points paying positions with 15th. Haslam and Gerloff were the only two riders to use the standard SCX tyre provided by Pirelli, with the other 19 opting to use the development SCX solution for Race 1.

Jonas Folger (Bonovo MGM Action) just missed out on a points finish at Misano, finishing just 0.161s behind Rabat in 16th place, with Isaac Viñales (Orelac Racing VerdNatura) in 17th place, nine seconds behind Folger. Frenchman Christophe Ponsson (Alstare Yamaha) was 18th with TPR Team Pedercini Racing duo Samuele Cavalieri and Loris Cresson rounding out the classified finishers. Chaz Davies (Team GoEleven) had been running in the top ten when he had a crash at Turn 4 at the Italian venue, meaning the British rider was unable to re-join the race.

P2 Toprak Razgatlioglu (Pata Yamaha with BRIXX WorldSBK)
“First laps, I didn’t have a good feeling on the bike. And after I felt too much sliding in the rear tyre. But I tried to finish in a good position. But we are happy, again on the podium. And very important also, I take good points for the Championship. We are happy. Tomorrow also we try a different setup maybe a different tyre for a good race and we will see tomorrow. Thank you very much”

P3 Jonathan Rea (Kawasaki Racing Team WorldSBK)
“I don’t know (how I saved that crash). I would like to say I was learning from Marc Marquez but in reality it was complete luck. I felt the tyre go but I pushed into the tyre and pushed my knee. I show you my knee. Completely off the bike. It’s lucky! Thank God, he was really looking down at me there. But we did a good job. I think the time I lost in this moment was the finishing gap. I was struggling with some areas of the bike so I look forward to tomorrow. I’ll try and improve and fight with Michael but congratulations to him, he did an incredible race… So I’ll try to be back here tomorrow!”