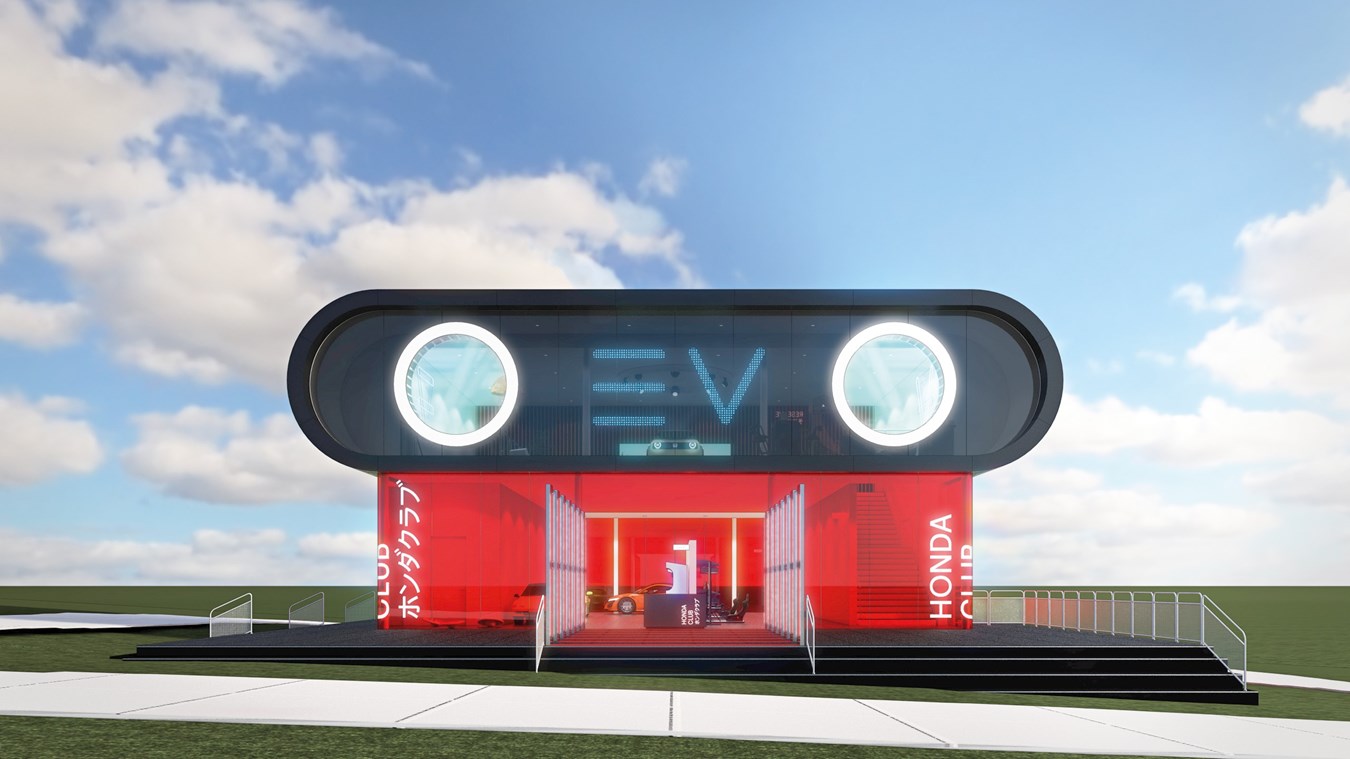 Honda UK has today unveiled its full plans for the 2019 Goodwood Festival of Speed, including the electrifying stand design, the exciting activations on stand and the dazzling array of two and four wheel machines on the famous hill climb.

Dave Hodgetts, managing director at Honda UK commented: “Honda has been a sponsor of the Goodwood Festival of Speed for over 20 years and we have continually brought something new for visitors to see over the years. This year is no different as we now turn our attention to electrification and the arrival of the new Honda e next year. Our stand this year is called Club EV – a destination for future thinking motoring enthusiasts that showcases the joy of going electric and focuses on our electrification journey, welcoming all visitors to the electric vehicle club!”

Stand design
Taking its cue from the face of the new Honda e, the front of the stand’s first floor, which faces the famous hill climb, will be a direct representation with two large circular windows representing the headlights. This first floor will solely house the new Honda e Prototype, making Goodwood visitors the very first in the UK to see the car.

Keeping the stand design simple to reflect the car’s ethos, the ground floor will showcase Honda’s electrification journey before visitors head upstairs to the first floor to see the new Honda e Prototype in the Club EV lounge. Honda is keen to ensure all visitors get up close and personal with the car, so the first floor area will also have eight virtual reality headsets which will immerse visitors into the interior of the car.

Bringing to life Honda’s bold ambition to have 100% of European automotive powertrain sales electrified by 2025, visitors will enter the stand between two CR-V hybrids before journeying from 1972 to 2019. Visitors will take in the 1972 Civic; then the 1999 Insight, where Honda’s hybrid journey started 20 years ago; and finally the pinnacle of Honda’s hybrid technology, the 2019 NSX, which makes its UK debut at Goodwood.

Bringing a shot of motorsport to the stand’s electrified theme will be the Mugen Shinden hachi, a battery-powered zero emissions racing motorcycle. Designed and engineered for the TT Zero Class entry at the Isle of Man TT, the Shinden has claimed six victories, thirteen podium-finishes and set four course records since 2012. The 2019 Isle of Man TT saw Shinden’s latest triumph; lapping the 37.73-mile road course at a record average speed of 121.9mph.

Stand activations
As always with Honda at Goodwood, it’s not just cars and bikes to look at – the stand features a host of interactive features to engage and excite. The first is the wobble board, which puts to test Honda’s motto that difficult is worth doing. On average, the Honda team can only stay balanced on a wobble board for 63 seconds, so Honda is challenging visitors to see if they can do better.

Alongside the 1972 Civic are classic games from the 1970s, Space Invaders and Asteroids and opposite the Insight is a game to relive the TV show Who Wants to be a Millionaire, which was at peak popularity in 1999, the same year as the Insight launched.

Further exploring the hybrid electric theme, there will be an F1 themed racing wall alongside a couple of simulators where visitors can recreate the experience of driving an F1 car at Suzuka in Japan.

Two and four wheel machinery on the hill
F1 fans are in for an absolute treat with Honda specially bringing over from Japan the famed McLaren-Honda MP4/4. Arguably one of the most successful F1 cars ever, the MP4/4 won, and took pole position in, 15 out of the 16 races in the 1988 season. Alongside this iconic car, Honda drivers will be piloting the new Honda e Prototype and the NSX up the famous hillclimb over the course of the four day event.

To celebrate 60 years of Honda racing, five motorcycles will take to Goodwood’s famous hill, the earliest of which will be the 1959 RC142. Two championship-winning motorcycles in the shape of Marc Márquez’s 2018 RC213V and the 1989 NSR500 are set to follow, with five-time 500cc World Champion Mick Doohan riding the latter. Bringing proceedings on the hill up to date will be a pair of 2019 Honda Racing CBR1000RR Fireblade SP2s which compete at the Isle of Man TT and in the British Superbike Championship.

Making its return to the Festival of Speed hill climb after a three year absence, the Mugen Shinden hachi will put on a dynamic display as it charges up the 1.16-mile course throughout the weekend.

Honda’s F1 activity at Goodwood
Scuderia Toro Rosso Formula 1 driver Alexander Albon will be in attendance at the Goodwood Festival of Speed as a special guest of Honda. Alex will pilot the Honda e Prototype in the famous hillclimb on Sunday 7th July. This one-off exclusive drive will take place in the first-glance batch at 10:45am.

This running of the Honda e Prototype will be the ultimate showcase of the advanced technology of Honda’s electrified powertrain, in the hands of one of the most promising young drivers in Formula 1 today.