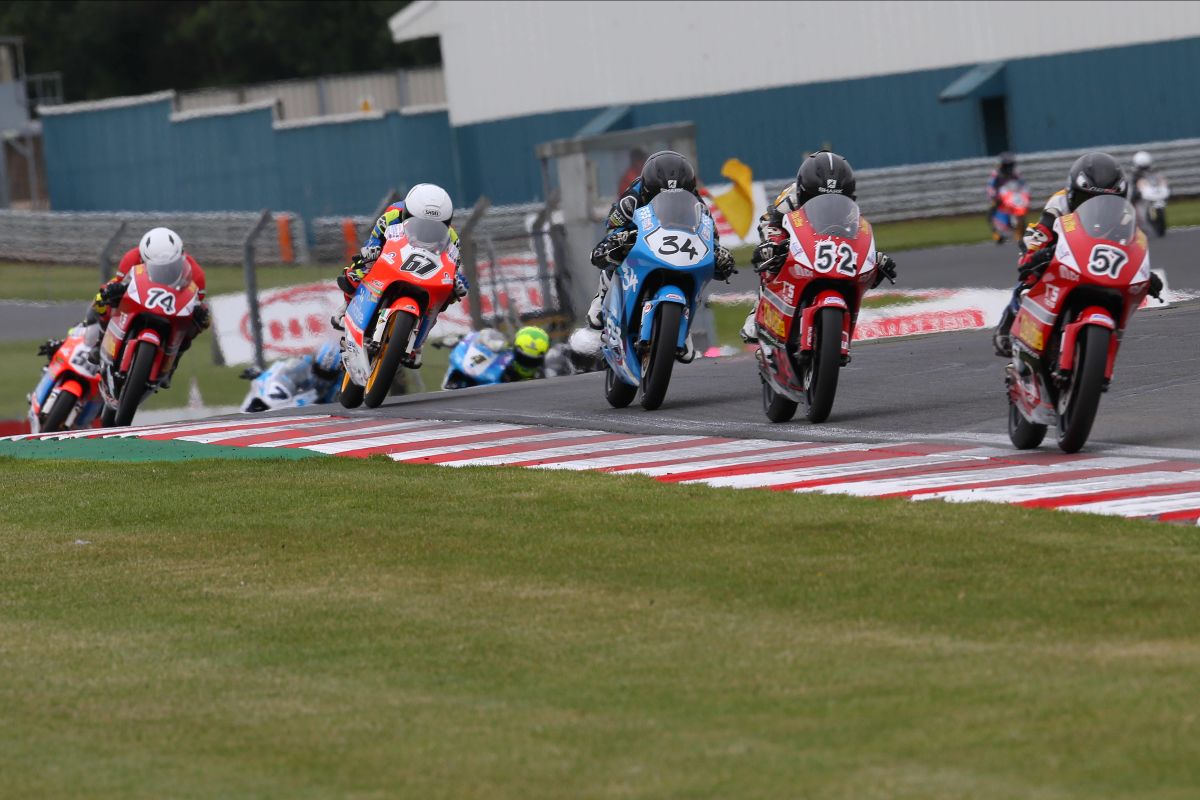 The BTC heads for the biggest stage of the season this weekend, racing at Silverstone alongside MotoGP™

The Honda British Talent Cup will be back on track this weekend, and next up it’s the stunning Silverstone Circuit in Northamptonshire. Fast, flowing and a legend of motorsport, the field will be battling it out for another 50 points over two races – and the standings may be poised for a shake-up.

On the way in, Evan Belford (City Lifting by RS Racing) maintains his position as points leader, but last time out saw the number 52 have a tougher round of it – and there were three races, as an extra was added to the bill following the Race 2 cancellation at Thruxton. That meant that any advantage his rivals had around the Donington Park national layout was give three chances to show, and a few needed no second invitation to make Belford’s lead now just 13 points.

It’s his teammate Johnny Garness closest on the chase, the number 57 taking a win and two further podiums to get back into serious contention. He’ll be looking for more victories as the BTC takes on Silverstone, but with such legwork done to get back within striking distance, he’ll also want to concentrate on retaining some consistency. Carter Brown (City Lifting by RS Racing), third overall and now 27 off the top, will also want to keep gaining ground, which he did in every race at Donington… but by only 1 or 2 points a pop. Winner at Thruxton, he’ll join Belford as aiming for another trip to the top step this weekend.

Fourth overall, meanwhile, is Casey O’Gorman (Microlise Cresswell Racing) after the number 67 shot back into contention on his return from injury. As damage limitation after missing three rounds comprising five races goes, returning to take a second and two wins isn’t a bad weekend’s work at all. It’s one off perfect. O’Gorman’s performances last time out also reiterated his speed, and he’ll be looking to get straight back into the fight at the front at Silverstone and underline his pace and intent once again. 45 points off the top and four victories in the five races he’s actually contested in 2021 say he remains very much a key favourite.

James Cook (Wilson Racing) also impressed at Donington to take two more podiums and will be pushing for more, and Ollie Walker (Moto Rapido / SP125 Racing) and Jamie Lyons (C&M Motors Ltd / Tooltec Racing) had a good run last time out. Bailey Stuart-Campbell (151s Racing) seemed to take a step forward and he’ll be looking to underline that, too, as will Kiyano Veijer (Microlise Cresswell Racing). The Dutchman had a revelatory round at Donington and took his first podium, but can he stay there as the BTC takes on the behemoth of Silverstone? Kiwi teammate Corman Buchanan will also be back on the scene and looking to put all three Microlise Cresswell Racing machines into the battle at the front. 5.9km is a lot of track to tame, but the BTC didn’t take on the Grand Prix layout last year so the rookies aren’t on as much of the back foot as they could have been.