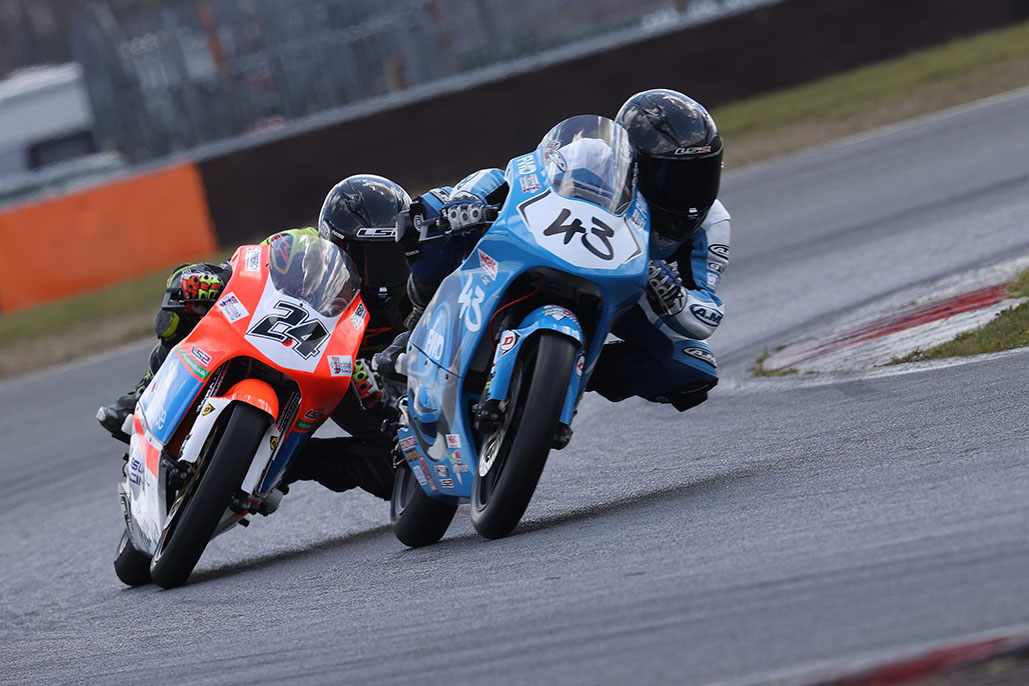 The BTC returns for another season of close racing, with the classic Cheshire circuit hosting the first two races of the year.

The time has finally come for the Honda British Talent Cup to get back on track, with Oulton Park hosting the season opener as the Cup visits the classic venue for the first time. After a day of pre-season testing at Silverstone and then an official two-day test at Snetterton, it’s now time for the lights to go out for real – with 50 points on the table over two races at Round 1.

In testing, James Cook (Wilson Racing) was fastest at Snetterton and podium finisher Evan Belford (City Lifting/RS Racing) at Silverstone – the latter by two single thousandths ahead of teammate Johnny Garness. The likes of Harrison Crosby (Banks Racing), Ollie Walker (Moto Rapido/SP125), Ryan Hitchcock (Wilson Racing) and Sullivan Mounsey (iForce Lloyd & Jones) also look ready to fight at the front from the off, showing speed at both venues. That trend therefore seems likely to continue at Oulton Park, despite it being new turf for the BTC.

One thing testing can’t tell us, however, is whether the likely pre-season favourite retains that moniker. Casey O’Gorman (Microlise Cresswell Racing) has missed both tests as he also races in the Hawkers European Talent Cup this season, which leaves a few guessing as to what his pace will be – and whether having already won three BTC races last season leaves him as the man to beat. His real speed may remain a guessing game a little longer though as he fights back to fitness following a foot injury sustained in HETC practice in Valencia in May. Garness, meanwhile, also missed the official test at Snetterton due to HETC duty… so where will they slot back in to the field?

Bailey Stuart Campbell (151’s Racing) also remains a bit more of an unknown so far this season after missing most of the Snetterton test following a crash, and he’s already been on the podium. Jamie Lyons (C&M Motors Ltd/Tooltec Racing) is another who’s shown pace before and who couldn’t attend the test, leaving a few fast competitors looking to get straight back to business near the front.

It will also be interesting to see how New Zealander Cormac Buchanan (Microlise Cresswell Racing) slots in. He was third quickest at Snetterton in testing as he got to grips with BTC machinery and will race in the Cup at rounds that don’t clash with the Red Bull MotoGP Rookies Cup – including the season opener at Oulton.

With the top four from 2020 moving on to pastures new, there will be a new name on the Honda British Talent Cup this season – and plenty to play for as O’Gorman, Belford and Stuart-Campbell are the only riders who’ve already been on the podium. Who will strike first in 2021? We’ll find out in Round 1, with the first race of the season getting underway at 15:45 (GMT +1) on Saturday before Race 2 at 15:15 on Sunday.