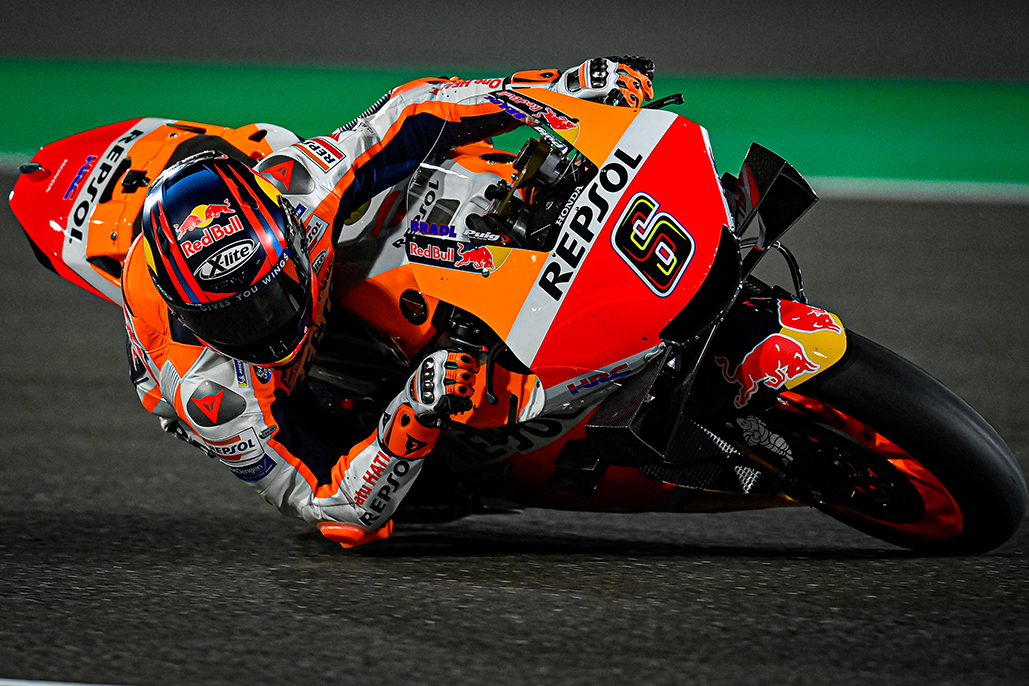 Bradl rules a windy day in the desert and the Moto2™ graduates get their first taste of the premier class as MotoGP™ shakes down in Doha.

MotoGP™ is BACK! The Shakedown Test officially got 2021 underway at Losail International Circuit in Qatar on Friday, meaning it’s rookies and test riders only until Saturday welcomes the rest of the grid to the party. At the Shakedown, it was HRC test rider Stefan Bradl who finished finished top of the pile, the German pulling 1.2 seconds clear at the top despite the pace staying a fair margin away from “normal” Qatar speed. His 1:55.614 is a couple of seconds down on the all-time lap record and he rode around with a carbon inserted chassis, the same one he finished the season so brilliantly on in 2020.

A big reason for the laptimes was the windy conditions, making it difficult for the riders to get a decent amount of running in and even causing their own Red Flag involving no riders. For three rookies – Enea Bastianini (Avintia Esponsorama), Luca Marini (Sky VR46 Avintia) and Jorge Martin (Pramac Racing) – it was still first ever contact with their MotoGP™ machinery, however, and there was a buzzword for all: “FAST.” Bastianini was the quickest of the three, fourth overall after 35 laps. At this stage though, it’s all about gaining experience and the first one out was Luca Marini (Sky VR46 Avintia), the Italian eventually finishing P8 after 33 laps. Martin, meanwhile, endured his first MotoGP™ crash, but the Spaniard was unhurt when he went down on the exit of Turn 3 after hitting a bump. Martin finished his maiden day as a premier class rider with a 1:58.875 in P10 after 31 laps.

Back at the top between Bradl and Bastianini, two Yamaha test bikes were inside the top three on the timesheets, and their testing duty was split between three riders: multiple Grand Prix winner Cal Crutchlow as he returns to the fold in a testing capacity, alongside Katsuyuki Nakasuga and Kohta Nozane. The bikes were numbered and counted on the timesheets, not the riders – but Crutchlow seemed to be back on it! The third machine was registered in P6 and overall, the Iwata marque did more than 100 laps.

Ducati Lenovo Team test rider Michele Pirro ended the day 0.005s behind Bastianini in fifth place, and the Italian was seen riding Jack Miller, Francesco Bagnaia and Johann Zarco’s (Pramac Racing) machines during the Shakedown Test. Ducati debuted new wings, and we’re surely going to be seeing more innovations from the Bologna factory throughout the Qatar Test when all the riders are out on track. It’s become almost a tradition.

Meanwhile at Aprilia Racing Team Gresini, Lorenzo Savadori is, like the Moto2™ graduates, also gearing up for his first full season as a premier class rider and he was out on Aprilia’s pretty much all-new RS-GP. As Simon Crafar reported from on the ground in Qatar, the 2021 machine is basically a whole new package. It features a new engine that gives improved power across its range, a new seat unit, a new top and bottom exhaust along with a new tail unit, new front aero and in addition, Aprilia have a holeshot device attached to the rear linkage. Savadori wasn’t joined on track by teammate Aleix Espargaro, the Spaniard choosing to sit out Friday’s running, but the rookie Italian headed out on the number 41 bike at stages. He was seventh after posting a 1:58.273.

Sylvain Guintoli and Takuya Tsuda were lapping on Team Suzuki Ecstar’s GSX-RRs, the duo finished P9 and P12 respectively. Guintoli said that Suzuki have a major programme ahead with testing new parts and the Frenchman was over the moon to be back on the bike after five months off. The reigning team World Champions will welcome reigning riders’ Champion Joan Mir and teammate Alex Rins for the rest of the track action to join in the workload. Will they remain the team to beat in 2021?

At Red Bull KTM Factory Racing, MotoGP™ Legend Dani Pedrosa was putting in the laps, the Spaniard finishing 11th on the timesheets. The number 26 was seen testing a new tail unit for the Austrian factory and he completed 34 laps. Pedrosa’s four teammates – including Tech3 KTM Factory Racing – will be on track tomorrow to join the programme.

With the wind causing plenty of issues for the Shakedown Test, an already busy and vital Qatar Test is about to become even busier over the next week! Saturday sees all the full-time riders get their legs over MotoGP™ bikes for the first time in 2021, so don’t miss the it and stay up to date with the comprehensive coverage on motogp.com!