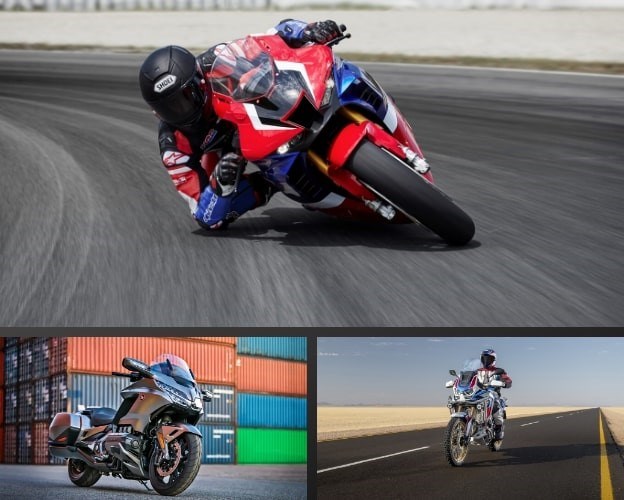 Honda UK has revealed its grand plans for Motorcycle Live, where it will show off a trio of flagship models to show-goers for the very first time. True to form, Honda will display its vast range on an impressive stand at the NEC, which opens its doors on Saturday 16th November.

Crowning the Super Sport and Adventure families respectively, the CBR1000RR-R Fireblade and CRF1100L Africa Twin have benefited from significant overhauls as they have evolved into the latest generation models. Various derivatives of both models will be on display at the show and the same goes for the GL1800 Gold Wing line-up.

Also carrying updates into the show are the CB1000R, CMX500 Rebel and SH125i. Elsewhere on stand will be the CB1100 RS 5Four, which will be joined by its creator, Guy Willison, on both weekends. Furthermore, a cross-section of models from the Super Sport, Street, Adventure, Scooter and Off Road ranges will be well represented; and from road to racing, Marc Marquez’s championship-winning RC213V will be display with the MotoGP star’s iconic eight-ball.

For 2019, the Honda stand takes on a distinct look and feel with interactive elements and a host of live features, which will be dotted in and around the plethora of bikes, such as the pop-up stalls housing Honda experience centres representatives and information hubs. Honda’s presence at the show will go beyond the stand, with opportunities for visitors to ride various Honda models.

Taking pride of place on stand will be the all-new 2020 CBR1000RR-R Fireblade(s). Redesigned from the ground-up, the latest generation Super Sport motorcycle moves the game on significantly, drawing heavily on the RC213V-S to deliver unprecedented levels of performance. Nestled within the all-new aluminium diamond frame is the 1000cc inline four engine that benefits from HRC technology and an Akrapovic exhaust system.

From one model steeped in motorsport glory to another, the Africa Twin. Developed to conquer the fearsome Dakar Rally, the legend has lost none of its kudos in advancing to the latest generation. Still powered by a parallel twin and sporting the recognisable Tricolour scheme, the two versions channel the spirit of the original, doing so with a suite of modern technology that makes it as capable on road as it is off.

Adding a fourth string to the GL1800 range’s bow is the new Gold Wing DCT. The top-box-less Gold Wing made its UK debut at Motorcycle Live last year, however it was exclusively manufactured with a manual transmission. For 2020, the sleeker model is available with DCT, reflecting the transmission options offered on the Tour model. Complimenting the new derivative are range-wide improvements to the suspension and fuel-injection system.

Sure to steal plenty of attention is the CB1100 RS 5Four. Limited to a production run of just 54 units, this model starts out life as a standard CB1100 RS, before renowned bike builder Guy Willison applies his expertise, imparting a classic, Café Racer aesthetic to the already retro-inspired, air-cooled motorcycle. To complete the cosmetic transformation only the highest-grade materials are used – the sculpted handlebar fairing and single seat tail unit, both fashioned out of aluminium, are testament to the quality approach.

On-stand attractions won’t stop at the bikes. A live rolling road will provide the opportunity for visitors to experience first-hand the super-fast and super-smooth shifts of DCT, as well as the plush ride facilitated by the new Africa Twin Adventure Sport’s sophisticated Electronic Suspension.

Those interested in joining the Gold Wing community will be welcomed into the Gold Wing lounge for a full rundown on the model, courtesy of a Gold Wing specialist. Elsewhere, Honda Finance and the Q&A Tech Desk will help prospective and current Honda riders make the most of their ownership experiences. Current bikers can also share their passion for riding in the www.Hondaengineroom.co.uk video booth.

As is customary at the show, there’ll be plenty of chances to ride a Honda away from the stand. Test the new Africa Twin’s mettle off-road in the Experience Adventure space or take to the road from the Test Ride base. Even those without a licence can get in on the riding action too, at the MCIA TryRIDE feature, where CB125Rs and Honda scooters will be available.

Speaking ahead of the exhibition, Head of Honda Motorcycles Neil Fletcher said: ‘Motorcycle Live is a huge event on the Honda calendar and we’re really looking forward to it off the back of a big EICMA. With two all-new flagship models in the Fireblade and Africa Twin, we can’t wait for the doors to open to the NEC so the British public can get up close to these amazing bikes for the first time.’