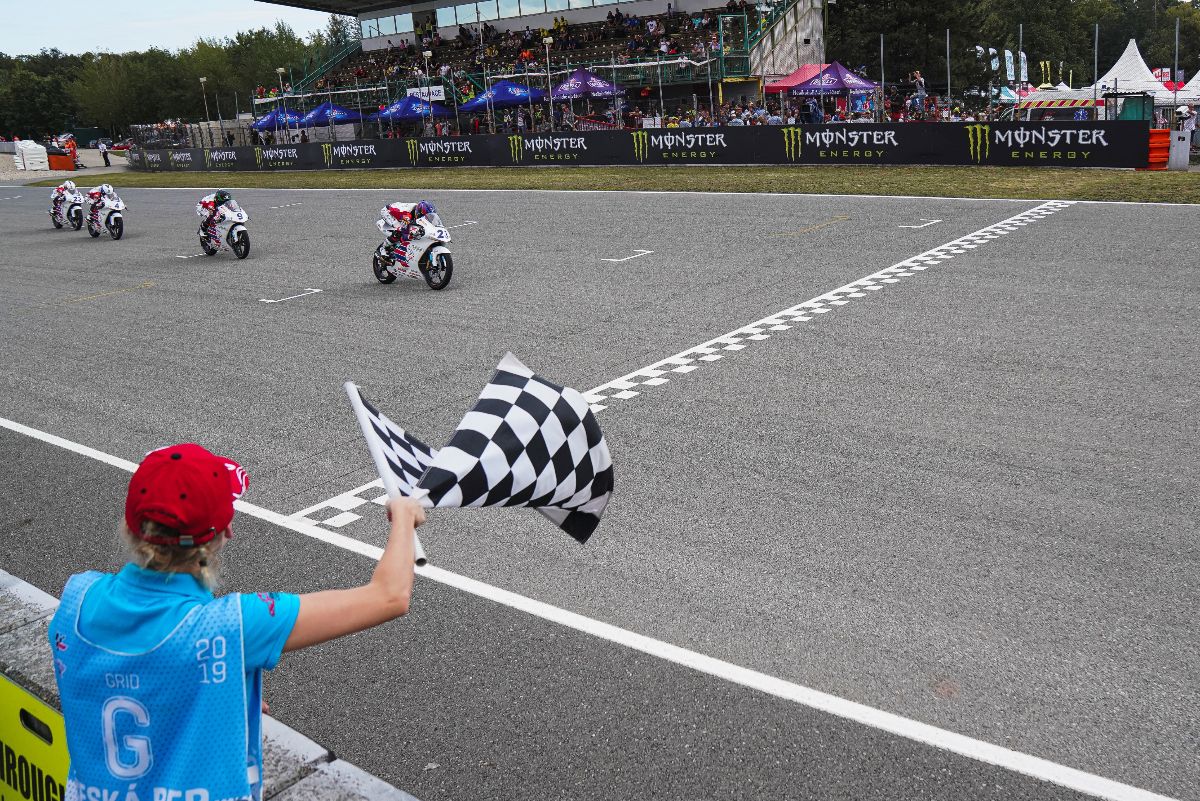 The number 23 kept his title hopes alive with an impressive win in Czechia, ahead of Brian Hart and Championship leader Scott Ogden
Cameron Horsman took a stunning victory in Race 2 at the Automotodrom Brno, with everything coming down to a four-way fight and the number 23 doing everything he could to cut down his points deficit as he took the win in style. Brian Hart took second after an impressive Sunday hammering home his pace at Brno, with the ever-consistent Scott Ogden completing the podium to keep the lead ahead of the season finale. It’s 16 points in it, with 50 more to play for.
Hart got the holeshot from second on the grid, with Horsman shooting up into second from the second row – but it didn’t last long as the number 23 then attacked for the lead. Championship leader Ogden followed him through, but Hart was quick to hit back as polesitter Fenton Seabright threatened behind. The number 9 then took back the lead not long after, looking to pull the pin and Horsman going with him.
That’s when Seabright struck for third, the number 22 making short work of Ogden and setting off in pursuit. Horsman was overhauled soon after, before Seabright homed in on Hart and took the lead. Could be repeat his Race 1 dominance in the dry?
From there, the group began to splinter. Seabright and Hart, despite their duelling at the front, were pulling out a good gap back to Jack Nixon, who had Horsman for company as Ogden fought it out with Rhys Irwin following a wobble for the Championship leader. As the laps ticked down, it seemed like it was going to be a definite duel for the win as Seabright and Hart were the only two who led over the line from Lap 1 all the way to the penultimate lap. But despite a battle royal for third, the chasing pack would go on to cut down the gap.
It didn’t come easy, however, with some spectacular racing somehow not hampering some impressive pace. Spaced out initially and then all forming into a group, it was all-out war between Horsman, Ogden and Irwin for much of the race before Horsman was able to break away – for a few corners at least. Then, Irwin started to drop back and Ogden upped his pace, catching and passing the number 23 of his key rival Horsman and setting off in pursuit of the duo in the lead.
By the penultimate lap, a simmer had become a boil as the four converged: Hart, Seabright, Ogden and Horsman, Horsman then took third, before Ogden sliced his way straight through to the lead as the final lap began and the riders went three-abreast in the battle –Horsman and Hart the two able to capitalise to take over at the front.
From there, Horsman was pitch perfect to defend the lead to the line, taking a pivotal victory to cut the gap back down to 16 points ahead of Silverstone and the season finale. Ogden attacked Hart just behind but couldn’t quite get past as it then became a drag to the line, with Hart escaping the clutches of the Championship leader to take second.
That meant Ogden was forced to settle for third but was back on the podium – having missed it only once, in Race 1 at Brno – although Seabright ran him close as Saturday’s winner took P4. Rhys Irwin, after fading a little in the latter stages, took fifth, ahead of an almighty battle for P6.
That was won by Charlie Atkins by a mere tenth ahead of Charlie Farrer, who was hundredths ahead of Jack Nixon after the number 2 was another to drop back slightly in the latter stages, Jamie Davis was next in the group, with Jack Hart completing the top ten.
Harvey Claridge bounced back from his Race 1 crash to take P11 ahead of Corey Tinker, who was only thousandths ahead of Harry Leigh. Jamie Lyons and Osian Jones completed the points, with Edward O’Shea getting a ride through penalty for a jump start and coming home in P16.
Ross Maguire crashed out, and there was more heartbreak for Zak Shelton…again at the final corner. And again, it wasn’t the number 17’s fault. Contact from another rider saw a second dose of bad luck come his way once again on Sunday.
That’s a wrap from Brno and now it’s back onto home turf at Silverstone as the BTC race alongside the British Grand Prix. With 16 points in it, Ogden holds the advantage but there are still 50 in play – and Horsman will be pushing hard to try and take the crown. Tune in on the 23rd to 25th August for the final round!