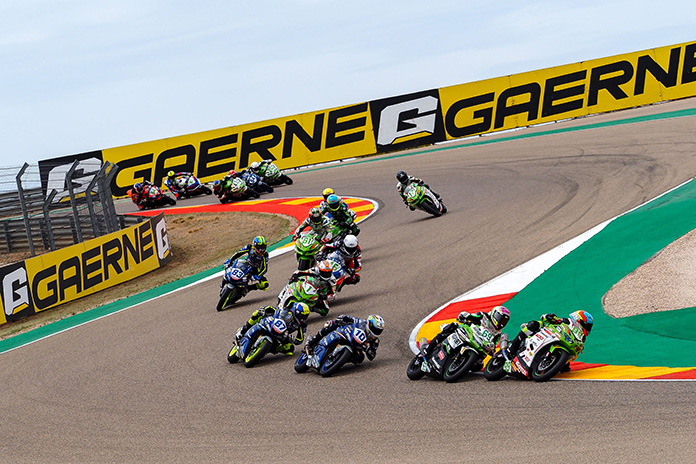 Spanish rider Huertas became the first rider to be penalised with a Long Lap Penalty before taking a dramatic victory.

The first race of the 2021 FIM Supersport 300 World Championship was shortened due to a late Red Flag but it was not enough to stop Adrian Huertas (MTM Kawasaki) claimed his first ever WorldSSP300 victory despite being penalised with a Long Lap Penalty, claiming the closest ever victory in the class history at MotorLand Aragon for the Pirelli Aragon Round.

Huertas secured his first victory in the shortened race after taking the lead of the race with Tom Booth-Amos (Fusport – RT Motorsports by SKM Kawasaki) finishing just 0.004s behind Huertas at the last timekeeping point the pair had crossed before the Red Flag was deployed, thanks to an incident between Meikon Kawakami and Bahattin Sofuoglu (Biblion Yamaha Motoxracing. Yuta Okaya (MTM Kawasaki) snuck onto the podium at the end of the race, with just 0.098s behind the top three, the fifth-closest podium of all time.

Ton Kawakami (AD78 Team Brasil by MS Racing) immediately lost his starting grid advantage to Adrian Huertas (MTM Kawasaki) with the Spanish rider immediately getting the jump to take the lead of the 12-lap race. Further back in the pack, Sylvain Markarian (Leader Team Flembbo), wildcard Julian Giral Romero (Viñales Racing Team) and Thomas Brianti (Prodina Team WorldSSP300) were all caught up in a collision at Turn 12, forcing all three to retire from the race and Romero taken to the medical centre for a check-up. Victor Rodriguez Nuñez (Accolade Smrz Racing) was another early-race retiree after he went down at Turn 9.

Huertas kept within the front group throughout the early stages of the race but became the first WorldSSP300 to be penalized with a Long Lap Penalty, for track limits infringements, dropping down from first place down to tenth as well as losing time to the lead group. It meant Meikon Kawakami (AD78 Team Brasil by MS Racing) would take the lead of the race although immediately lost it to Unai Orradre (Yamaha MS Racing) and Tom Booth-Amos (Fusport – RT Motorsports by SKM Kawasaki).

Booth-Amos took the lead just before the halfway stage of the race and remained comfortable up at the front despite having the disadvantage of not being in a slipstream, holding on to the lead throughout the middle stages of the race. With six laps to go, Meikon Kawakami swept around the outside of the final corner to briefly take the lead of the race, although Booth-Amos quickly regained the lead.

On lap nine of 12, Yuta Okaya (MTM Kawasaki) had his brief moment of leading the race as he passed Booth-Amos, although the British rider was able to re-gain the lead. It was one of a number of battles throughout the lead group with less than three seconds separating

The race was ended on Lap 10 following an incident between Meikon Kawakami and Bahattin Sofuoglu (Biblion Yamaha Motoxracing), who had fought into the lead group despite starting on the fifth row, but the incident at Turn 1 put both out of the race, with Sofuoglu taken to the medical centre for a check-up following the crash.

P1 Adrian Huertas (MTM Kawasaki)
“Last year was a really hard year. This year we worked so hard throughout pre-season and we take the things off the tree and we are really happy.”

P2 Tom Booth-Amos (Fusport – RT Motorsports by SKM Kawasaki)
“It’s always nice to be on the podium, so obviously happy about this. A little bit frustrated because I led most of the laps and because of the Red Flag I finished second. This is my worst circuit of the year, by far, so obviously I’m happy to come away with second. Points mean prizes so obviously we push for the Championship.”

P3 Yuta Okaya (MTM Kawasaki)
“My feeling is a little bit difficult because when I come to the parc ferme, I was first, but after I became third. I was a little bit confused myself but my pace is good and I am satisfied for the points, and we will be ready for Race 2.”
WorldSSP300 at MotorLand Aragon – Race 1


Championship Standings (after Race 1, Round 1)