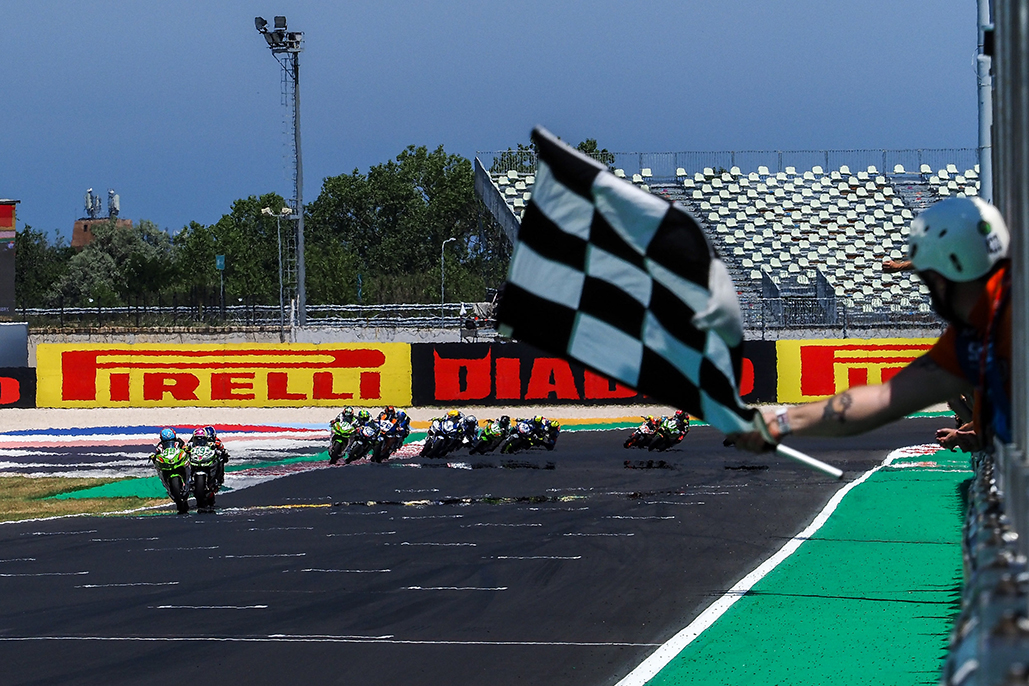 Nothing could separate the top three as they crossed the line with just two tenths separating the lead trio.

The first FIM Supersport 300 World Championship race of the weekend was a thrilling spectacle at the Misano World Circuit “Marco Simoncelli” for the Pirelli Made in Italy Emilia-Romagna Round with Spanish rider Adrian Huertas (MTM Kawasaki) claiming his second victory of the 2021 season in Race 1 at Misano.

Bahattin Sofuoglu (Biblion Yamaha Motoxracing) started the race from pole position and initially looked like he’d held on at the start of the race but his race came to an end on Lap 2 when Sofuoglu made contact with Victor Steeman (Freudenberg KTM WorldSSP Team), the Turkish rider retiring from the 15-lap race. Sofuoglu had already lost the lead prior to that incident with both Tom Booth-Amos (Fusport – RT Motorsports by SKM – Kawasaki) and Hugo de Cancellis (Prodina Team WorldSSP300) jumping ahead; the pair battling it out for victory.

Soon, Spanish rider Adrian Huertas (MTM Kawasaki) was fighting for the lead and claimed top spot on Lap 5 of 15, although in typical WorldSSP300 fashion it did not last long when Booth-Amos and De Cancellis were able to overhaul Huertas. The lead group of five riders, featuring de Cancellis, Huertas, Booth-Amos and Steeman as well as Yuta Okaya (MTM Kawasaki), were trying to break away but could not pull away from the chasing Koen Meuffels (MTM Kawasaki).

It meant 14 riders were separated by just two seconds as the ninth lap got underway with Huertas aiming to keep the lead he had re-claimed in the opening few laps of the race. Eventually the top six, now led by De Cancellis, were able to break away from Ton Kawakami (AD78 Team Brasil by MS Racing) in seventh place with six laps to go.

As the lead group fought with each other, the chasing group were able to re-join the lead six with Ana Carrasco (Kawasaki Provec WorldSSP300) now leading the group after battling up from 14th on the grid, sitting behind Italian Mirko Gennai (Team BRcorse) who also had to find his way through the field from 29th on the grid.

It meant Huertas claimed a stunning victory ahead of Booth-Amos and De Cancellis rounding out the podium places, with Huertas moving to the top of the Riders’ Championship. Yuta Okaya (MTM Kawasaki) came home in fourth place, almost two seconds behind the podium trio, with Meikon Kawakami (AD78 Team Brasil by MS Racing) and Gennai completing the top six.

Vicente Perez Selfa (Machado CAME SBK) was in seventh place with Bruno Ieraci (Machado CAME SBK), who was forced to start at the back of the grid, finishing in eighth place ahead of Italian compatriot Filippo Maria Palazzi (ProGP Racing) in ninth and Victor Rodriguez Nuñez (Accolade Smrz Racing) completing the top ten.

Meuffels ended up finishing in 11th place in an epic four-way scrap for eighth place, with Ton Kawakami (AD78 Team Brasil by MS Racing) in 12th place. 2017 Champion Marc Garcia (2R Racing) claimed 13th place with Steeman, who had been in the lead group, in 14th and 2018 Champion Carrasco completing the points-paying positions after she lost positions in the latter stages of the race.

Unai Orradre (Yamaha MS Racing) had a crash at Turn 10 which forced the youngest ever race winner in WorldSSP300 to retire from the race, while Joel Romero (SMW Racing) crashed out at Turn 16 with just a handful of laps to go.

P1 Adrian Huertas (MTM Kawasaki)
“Well it was a difficult race because I crashed into pitman with another rider. And I had a lot of pain in my knee. But in the end we repaired everything and in the race we were doing a really good pace and in the end I won so I’m really happy. Thanks to my team and this race is also for Ismael Bonilla.”

P2 Tom Booth-Amos (Fusport – RT Motorsports by SKM Kawasaki)
“Yeah obviously I’m happy to take another podium. It’s all towards the championship points. So very happy for the race. I was trying to plan it to catch the slipstream on the last lap but I left it a little bit too far. I must work on that tomorrow but overall our pace is good and we’re strong again for tomorrow.”

P3 Hugo De Cancellis (Prodina Team WorldSSP300)
“It was a great race, it was really hard with the big group. I did my best all the race and at the end Tom and Adrian passed me. I did the long straight line at the front and I lost the win by little (margin). Thanks to the team, we did a great job and see you tomorrow for the next race.