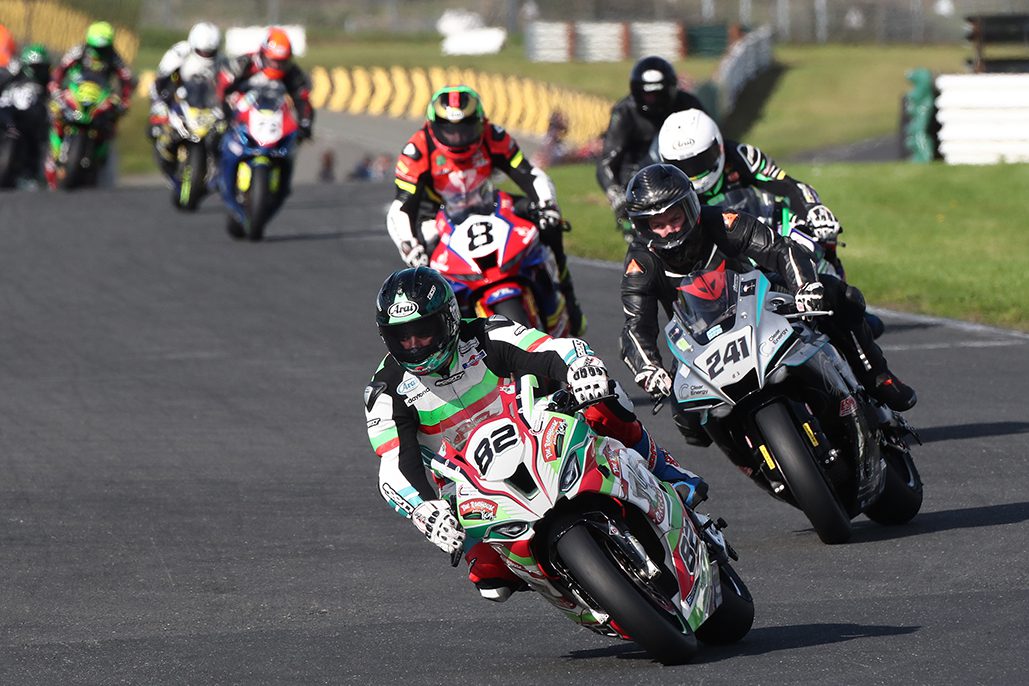 The new Dunlop Masters Superbike Championship season kicks off at Mondello Park this weekend, April 23rd and 24th, with a massive 180 bike entry.

The championship gets underway on the Mondello Park National Track with the County Kildare venue also hosting the Masters Motorcycle Show for the first time since 2019.

The season opener will not only feature some top class race action but also plenty to see off track. With classic race bikes joining the Martin Birrane Car collection in the circuit’s Motorsport Museum, Trade Stands, Classic Race Bike demonstration laps and stunt performances in the paddock, the event will offer a fantastic mix of racing and family entertainment.

On track the main event will once again be the Dunlop backed Superbike class where the battle at the front of the field will take up where it left off at the end of last season, but with a few extra riders thrown into the mix. The front runners were more closely matched than ever last year, with four time champion Richie Ryan having a titanic battle on his hands to retain the title on his Mobil1 Yamaha. By the end of the year the BMW mounted Derek Sheils and Michael Sweeney, Thomas O’Grady’s on a Yamaha and Emmett O’Grady on the unique Honda Fireblade, were the top riders and all five are ready to go again as the new season commences.

Having missed out on all of last season, Peter Moloney will be looking to get back into the victory mix as he goes up against the established top five on his Suzuki. Moloney will not be the only one looking to bridge the gap as Ross Irwin brings another of the latest Honda machines to the grid, alongside a serious title tilt by Alan Kenny on another R1 and top Superbike Cup graduate Shane Connolly.

Adding a little intrigue into the battle will be the unknown quantity that is UK visitor John Ingram on his Fleetwood BMW. Ingram’s pedigree speaks for itself as a former race and championship winner in the UK with plenty of BSB and Road Racing experience to boot, but he will be on a steep learning curve as he tackles the Mondello Park National Track for the first time and he may not be in the mix straight away. With Superbike Cup graduates Evan O’Grady, Dean O’Grady and 2020 ‘Cup’ champion Joe Grant having their first season in the top class, the Pro race will be as strong as it has ever been.

Picking a winner in the Cup class could be just as hard, as Andrew Whearty and Declan Madden both bring current generation BMW machines to the battle, where they could face some serious opposition from reigning Supersport Cup champion Jamie Collins on a Michael Dunlop built Suzuki. With many of the 2021 Cup front runners moving on, the class will be open for some new winners to step up.

Of the supporting cast the Supersport Cup has seen a deluge of newcomers entering, bringing the class to over thirty riders. The smaller Pro class will benefit from the arrival of UK team AKR who will bring former MotoGP and BSB rider Chris Burns to the series with the aim of winning the title as well as mentoring their up and coming young rider AJ Carey.

The oversubscribed Principal Insurance Twins class will be contested for the first time in many years by some brand new machines, as the Aprilia 660 is included for the first time. Five of the new machines will take to the grid and it remains to be seen how these Mini Superbikes will fare in standard trim against the heavily modified Kawasaki’s and Suzuki’s.

A new cohort of young racers will contest the DM Groundworks and FJS Junior Championship as they begin their careers. The success of Aoife Griffin in 2021 seems to have ushered in a new era in Irish Motorcycle Racing as three female racers will take to the grid this season. The remainder of the supporting cast will be made up of Classic Superbikes, Pre-Injection and Sidecars with all classes racing three times over the busy two days.

Tickets for the Dunlop Masters Superbike Championship season opener and Masters Motorcycle Show can only be purchased in advance from www.masterssuperbike.ie.