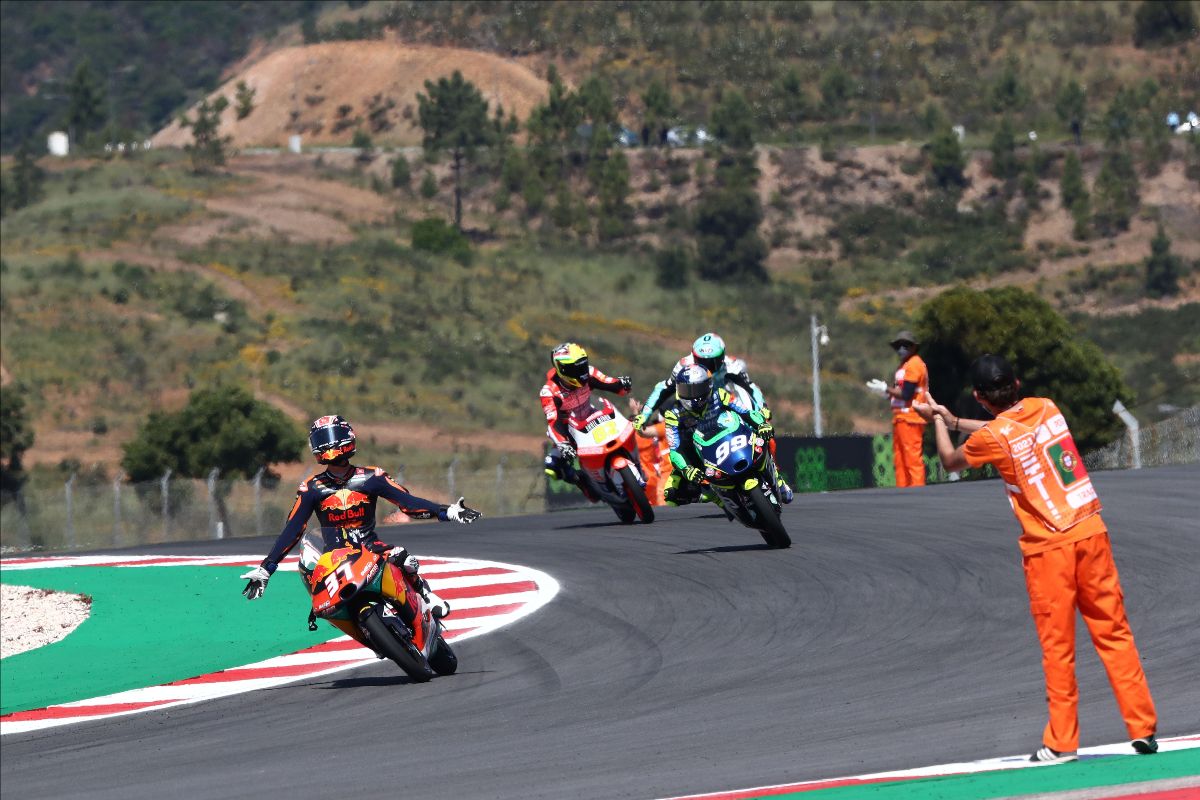 Can anyone stop the rookie sensation – and on such familiar, home turf?

It’s been some time since a rider made a splash in the Grand Prix paddock as big as that of Pedro Acosta (Red Bull KTM Ajo), but the Portuguese GP did the exact opposite of calming down the hype. As the Spaniard hunted down and passed Dennis Foggia (Leopard Racing) with clinical but very much on-the-edge brilliance at Portimão, all it did was add to the legend before Moto3™ saddle up at the Circuito de Jerez-Angel Nieto; turf that’s even more familiar to the rookie superstar. So can anyone stop him? They’ll have to soon, as his lead is already well over a race win in the standings…

One bit of good news for the grid is that Acosta hasn’t actually been the fastest so far. His speed is undoubtedly impressive and even more so for a rookie, but it’s race day where the Spaniard has done his shining. He’s won from pitlane but on Saturday, he’s not made it onto the front two rows of the grid yet. So tactics, racecraft and, sometimes, the pure luck of the draw are what the rest of the grid will likely need to defeat him, and there are a good few contenders waiting in the wings to do just that.

The first rider looking to hit back is Acosta’s teammate Jaume Masia, not least of all because he’s second overall in the standings, as well as the veteran in the box. He’ll want to put a dent in the attention being grabbed by the other side of the garage. Masia won the season opener and was quick in Portugal before a crash that he somehow recovered from to still take ninth, so he has speed. Can it all come together in Jerez?

Darryn Binder (Petronas Sprinta Racing) will be another key threat as he looks to hit back after a pitlane start in Portugal. The South African is looking consistent, aggressive and fast this season, and last year in the second race at Jerez he was only just off the podium. He’ll likely be one who won’t arrive at the final corner and play it safe, but so far this season he also seems like he’d pull it off. Wanting to make a charge at the crown means the gap is already such that it’s the kind of gamble worth making, too.

Niccolo Antonelli (Avintia Esponsorama Moto3) is another who should be well in the fight at the front. Until Doha, the Italian hadn’t been on the podium, suffering with a shoulder problem too, since his emotional win at Jerez in 2019. So he has form, he has experience and so far in 2021 he has consistency. Andrea Migno (Rivacold Snipers Team) too, and he was only just of the Spanish GP podium last year. Can he keep it rolling?

There’s also Romano Fenati (Sterilgarda Max Racing Team), another Italian veteran who’s already won at Jerez, and Tatsuki Suzuki (SIC58 Squadra Corse), who took to the top step last year in Andalucia. Foggia is another threat, as are Gabriel Rodrigo (Indonesian Racing Gresini Moto3), teammate Jeremy Alcoba and Ayumu Sasaki (Red Bull KTM Tech 3). And what about GASGAS Solunion Aspar Team’s Sergio Garcia and fast rookie Izan Guevara? Some bad luck has hit both so far in 2021, and Jerez is a chance to fight back.

Last but not least, the biggest chance to fight back likely comes for John McPhee (Petronas Sprinta Racing). The start of the season has been an uphill struggle of bad luck, boiling over and then a pitlane start with an added 10 second delay, so we’ve not seen the Scotsman in the thick of it on the final lap. And the last time we did at Jerez, he missed out on the win by just 0.064… so there’s some serious speed waiting to get back in the fight at the front.

Rookie superstars, veteran campaigners, a classic venue and an incredibly tempting final corner… Moto3™ are ready to take on the Circuito de Jerez-Angel Nieto and you know it’s going to be a stunner. Tune in on Sunday at 11:00 (GMT +2) for more awesome action from the lightweight class of Grand Prix racing!