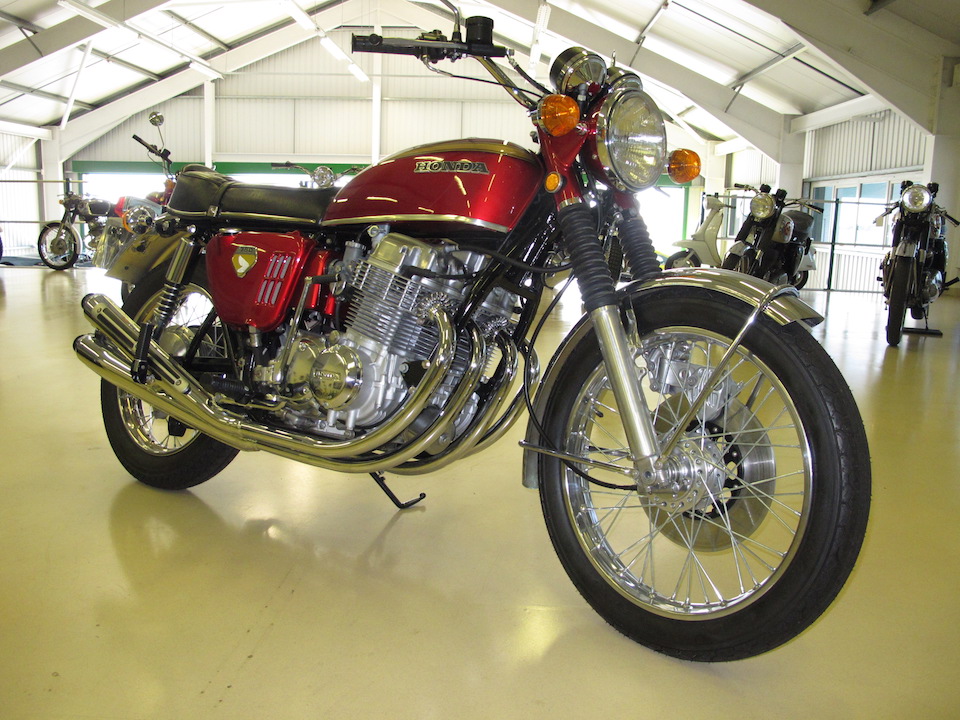 One of the finest collections of rare motorcycles in the UK will be going under the hammer at the Devitt MCN Ally Pally Show next month, as premier auction house Bonhams bring 74 rare and fascinating machines for auction. Alongside the auction, superstar biking celebs and iconic machines will take part in the world’s only indoor Supersprint, making the action packed event a must-see for all the family. For a limited time only, a pair of tickets are available now for £30.
The Devitt MCN Ally Pally Show and premier auction house Bonhams are giving motorcycle fans a rare treat next month when one of the most stunning collections of machines is set to go under the hammer. Belonging to a single collector, the 74 machines include some rare treasures including a 1969 Honda CB750, with gravity cast crankcases – one of a few of these machines still in circulation.
Also up for sale are two 1972 Kawasaki Z1’s, a 1977 Yamaha RD400, a 1966 US spec Triumph T120R, a 1975 Laverda SFC, a 1976 Ducati 900SS (with only 2,485 miles on the clock) and no less than six MV Agusta’s!
The auction joins an action-packed weekend of entertainment, based around the world’s only indoor Supersprint. The specially constructed course will see former World Superbike Champion and I’m A Celebrity winner Carl Fogarty, alongside Isle of Man TT legend John McGuinness, Chris Walker, James Whitham and multiple World Trials Champion Dougie Lampkin go head-to-head down the strip. In between races some incredible machines, including Loris Capirossi’s 2003 MotoGP Ducati machine and a 1970 Yamaha 4cyl 250cc 4 stroke prototype. The current list of machines taking to the strip is;
Loris Capirossi’s 2003 MotoGP Ducati GP3
Claudio Corti’s 2010 Forward Racing FTR GP113
2011 FTR Moto2 Honda
Tom Sykes’ 2008 BSB Factory Rizla Suzuki
Mark Phillips’ 1997 Triumph Speed Triple
1967 Honda RC181 500cc 4 cylinder (Mike Hailwood rep)
1970 Yamaha 4cyl 250cc 4 stroke prototype
Andy McGladdery’s 1986 Factory Suzuki 750cc TT Superbike
2003 Yamaha M1 (Max Biaggi replica)
1998 Yamaha YZF750cc (Niall Mackenzie replica)
Away from the main attraction, there will be a large retail area where motorcyclists will be able to grab a bargain on kit and parts. The Classic and Historic race bike display will allow fans to get involved with some of the most iconic machines in two wheel history.
The family-friendly event is on sale now, with tickets starting from £17 whilst children 15 and under go free with a paying adult. A special summer offer is available for a limited time only and allows customers to purchase two tickets for £30. Visitors wanting to meet the racing celebs and to maximise their show experience can purchase a VIP ticket, allowing them to get closer to the bikes, take part in an exclusive track walk, meet the superstar riders, receive a free MCN goodie bag and enjoy 10% discount on event catering. VIP Tickets cost £30 for an adult and £15 for children.

More information can be found at www.mcnallypallyshow.co.uk