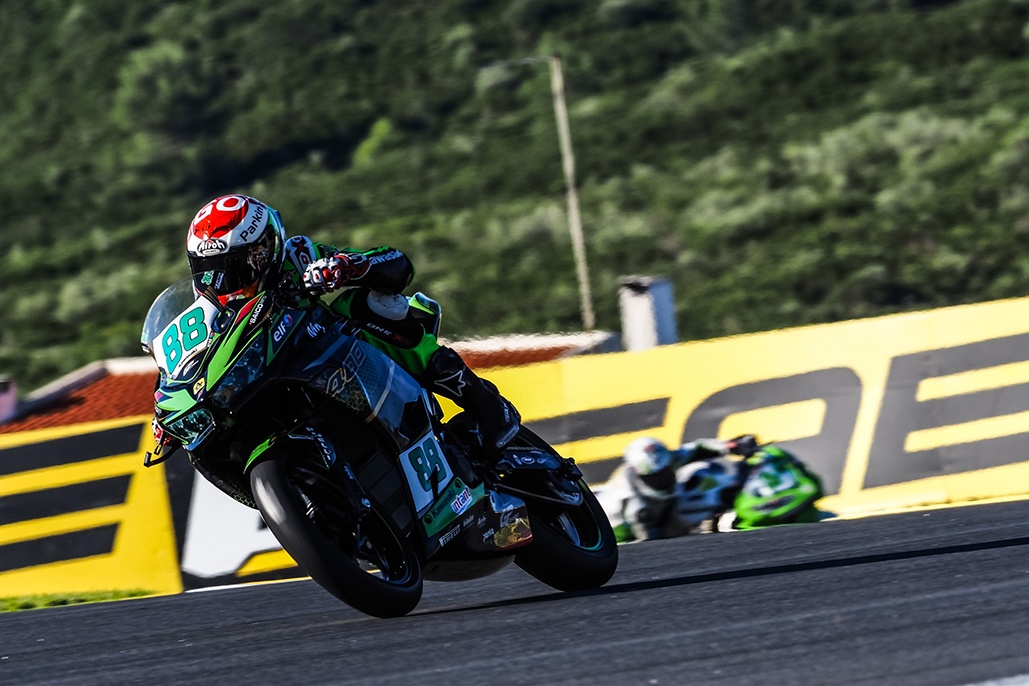 Italian Bruno Ieraci fastest as Championship rivals Jeffrey Buis and Scott Deroue are off the pace after two practice sessions.

There was no shortage of action during the two Free Practice sessions for the FIM Supersport 300 World Championship on Friday as Italian rider Bruno Ieraci (Kawasaki GP Project) set the pace at the Championship’s first ever visit to the Circuito Estoril as the season-closing Pirelli Estoril Round got underway with the Riders’ Championship still up for grabs.

Ieraci’s time of 1’51.514 from Free Practice 2 was enough to set the fastest time of the day as the Italian struck first ahead of two races across the Estoril Round, hoping he can end the season strongly. He finished ahead of Mika Perez (Prodina Ircos Team WorldSSP300) in second place as the Spanish rider showed strong pace, finishing ahead of Ukraine’s Nick Kalinin (Battley-RT Motorsports by SKM-Kawasaki) who demonstrated impressive Friday pace.

Marc Garcia (2R Racing) finished the day fourth in the standings as he continued his impressive return to the Championship he won in 2017; finishing just ahead of Alvaro Diaz (Biblion Motoxracing Yamaha WorldSSP300) and Tom Booth-Amos (RT Motorsports by SKM-Kawasaki); the top six separated by eight tenths of a second.

Championship leader Jeffrey Buis (MTM Kawasaki MOTOPORT) finished the day in 15th place, over a second away from Ieraci’s time, with Championship leader and Deroue’s teammate Jeffrey Buis in 18th place; Buis leads Deroue by 28 points heading into the two final races of the season and will be looking to move up the order as the weekend progresses.

Luca de Vleeschauwer (RT Motorsports by SKM-Kawasaki) suffered a nasty highside crash as he went through the final corner at the Circuito Estoril with the Belgian unable to take any further part in the session; he was taken to the medical centre for a check-up following the crash, before being declared fit. The Belgian rider finished the day in 33rd place following the crash. Sylvain Markarian (Yamaha MS Racing) and teammate Ton Kawakami both crashed out in the second Free Practice session with both able to get back to their feet following the crash; Markarian finishing the day in 44th place while Kawakami was 25th.