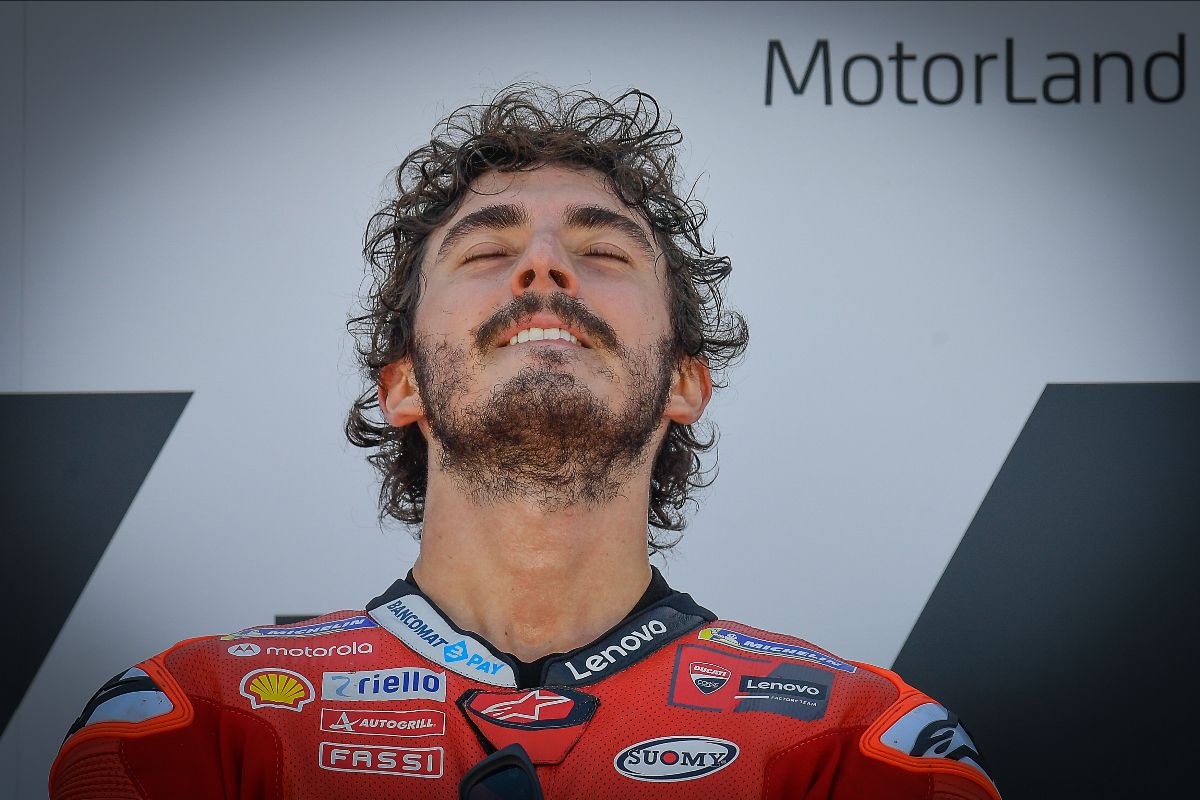 He’s been close before, but Francesco Bagnaia (Ducati Lenovo Team) is now a MotoGP™ race winner. In a true all-time classic at the Gran Premio TISSOT de Aragon, the Italian went toe-to-toe with Marc Marquez (Repsol Honda Team) in a stunner of a duel, finding an answer for every attack as the eight-time World Champion tried, tried and tried again. Repelling the final assault as the number 93 headed through but wide, Bagnaia was able to cross the line with just over half a second in hand to take his first premier class win in impeccable style. Marquez nevertheless got back on the podium for the second time this year and gave us an incredible show, with reigning Champion Joan Mir (Team Suzuki Ecstar) locking out the rostrum in third.

As the lights went out, polesitter Bagnaia got away well and held on for the holeshot, with teammate Jack Miller going in a bit deep at Turn 1 and that allowing Marc Marquez to grab P2 after a lightning start for the number 93. Aleix Espargaro (Aprilia Racing Team Gresini) was up to P4, with Championship leader Fabio Quartararo (Monster Energy Yamaha MotoGP) losing out and down to fifth 5th. Alex Marquez (LCR Honda Castrol) then crashed at Turn 5, rider ok.

As Bagnaia and Marc Marquez led the train away, Quartararo was struggling. Both Mir and Jorge Martin (Pramac Racing) passed the Frenchman next as he slipped towards the clutches of eighth place Brad Binder (Red Bull KTM Factory Racing), but nobody in the early stages was showing their cards, with only 2.2 seconds covering the top six.

Just outside that top six remained Quartararo, however. By now, the Frenchman had the rapid starting Iker Lecuona (Tech3 KTM Factory Racing) climbing all over him, and at the end of Lap 6, the number 27 was through. A couple of laps later, another KTM was ahead as Binder followed Lecuona after the Spaniard had despatched him too, and Quartararo was suddenly down to P9.

With eight laps gone, the cards were beginning to appear on the table. Bagnaia and Marquez were just over a second clear of Miller in third, and that advantage was soon up to nearly two with 13 to go. Miller headed wide at Turn 16 not long after too, allowing Aleix Espargaro and Mir to cut through. The reigning World Champion then managed to despatch the Aprilia to take over in third, but the gap to Pecco and Marquez was now nearly three and a half seconds.

To compound the gap, the pace was far from slowing. The two leaders were exchanging 1:48s lap after lap, with the rest in the 1:49s and below. They’d carved out a 4.3s lead over Mir and Aleix Espargaro with nine laps to go, but then it was into tyre life territory. Would that play a role? With five to go though, there was no change, with both riders still in the 1:48s… and it seemed it was going to the finish.

With four laps left, the pressure from Marquez was ramping up. Getting closer and closer until he was glued on, a lap later the first move finally came. The Honda rider went for a lunge into Turn 5, but he was in a little hot and slightly wide, Pecco replying unflustered to get back into the lead. So Marquez next shoved his RC213V up the inside at Turn 15, but again, the Italian got the cutback and held P1. Two down, how many to go?

On the penultimate lap, another. An exact copy and paste at Turn 5, Marquez again lunged late and again got a quick reply. The exact same thing happened at Turn 15 too, and again, Bagnaia carved back past. And so it was going down to some final lap fireworks…

Marquez is Marquez though, so a seventh attempt then came at Turn 12. The number 93 got a great run out of his own namesake Marc Marquez Corner and was up the inside at the downhill left-hander, not a move he’d tried yet but ultimately one that wasn’t going to work either. Struggling to get it hooked up to the apex, Marquez was wide and onto the green, and Pecco needed no second invitation to sweep back past, keep it pinned and finally gain a few metres of breathing space.

From there the Italian made no mistake and crossed the line to complete a perfect weekend: pole position to maiden MotoGP™ victory, the eighth winner of 2021, defeating Marc Marquez on his home turf. His victory is also the 250th for Italy in the premier class, adding Francesco Bagnaia next to a little chapter of a rich history. Emotional in parc ferme, Bagnaia was just sublime on Sunday at Aragon.

Marquez threw absolutely everything at it as he sought that seventh win at MotorLand though, coming up just six tenths short. Still, it’s another podium and a leading role in an all-time classic, as well 20 points to add to his tally – and he’ll likely sleep rather well knowing he left it all out there, seven times.

Behind, Mir kept it tidy in third to take his fifth rostrum of 2021, in some space alone as he escaped Aleix Espargaro but couldn’t get onto terms with Bagnaia and Marquez. Aleix Espargaro’s P4 is another excellent ride from the Spaniard though, and he’s the top Independent Team rider. Miller couldn’t recover ground later on and finished a lonely fifth.

Reigning Moto2™ World Champion Enea Bastianini (Avintia Esponsorama) claims sixth for his best premier class result, putting the cherry on top of an impressive weekend. The rookie beat Binder by just 0.3s, and both escaped Quartararo by a good margin. A tricky day at the office for the World Championship leader and his second worst result of the season sees his lead cut, but it’s still a healthy 53 points with five races to go.

Martin took P9 less than a tenth behind Quartararo too, with Takaaki Nakagami (LCR Honda Idemitsu) 10th in the same pack as Bastianini, an earlier sparring partner, was able to break away from the Japanese rider. Lecuona made a mistake with a handful of laps to go that saw the Spaniard slip outside the top 10, but it was nevertheless a great ride from the 21-year-old and a stunning early charge.

So, a magnificent MotorLand battle sees Bagnaia finally claim that illustrious first MotoGP™ win. Next up: his home race at Misano. Remember that time he disappeared in the lead and then crashed? The Italian will be looking for a replay of the first half, and has never seemed less likely to recreate the second… save the date as MotoGP™ gets ready to take on the Riviera di Rimini.

Francesco Bagnaia: “A lot of emotion today. I’m so happy. We worked a lot to achieve this result, every time we were close, something happened and this dream to take my first victory, every time it was far. So to win today is a great liberation. I’m so happy, I have to say thanks to all the team, my family, my fantastic girlfriend, who are with me every day. It’s difficult to say something now, but it was not easy. I knew it wasn’t easy to stay in front of Marc at this track. His body isn’t at 100% but I think today with the hunger to win he was very, very competitive, and… I just tried to do my best and finish first. It’s a dream come true.”

Free Your Mind From The Daily Grind With The New Royal...