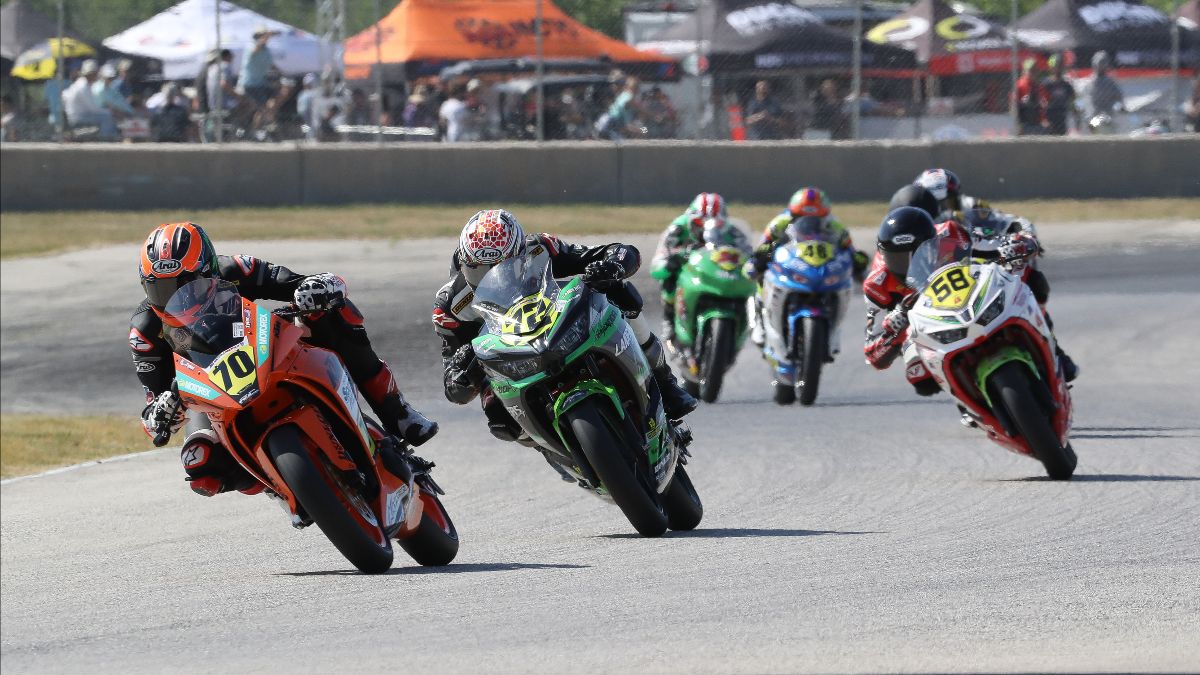 The Four Support Classes Feature Tight Battles For Championship Supremacy As The Series Heads To The Pacific Northwest.

All four of the MotoAmerica support classes feature close battles in the chase for class championships as the series brings the fight to the Pacific Northwest and Ridge Motorsports Park in Shelton, Washington, with first and second in those four separated by a total of just 43 points.

The closest championship fight in the 2021 MotoAmerica Series as we get ready to battle in the fourth round of the series, is in the SportbikeTrackGear.com Junior Cup Series where the top two are separated by just four points. Leading the way is MotoAmerica rookie Tyler Scott with the Pennsylvanian and his Scott Powersports/KTM RC390R leading New Hampshire’s Benjamin Gloddy and his Landers Racing Kawasaki Ninja 400 by just four points after three rounds and six races.

Both youngsters have won two races apiece, but Scott has been slightly more consistent with podiums in five of the six races. That gives him that four-point lead over Gloddy, whose 2021 record is marred a tad by a seventh-place finish in the last race at Road America. “Marred” is a bit strong considering that although he was seventh in the race, Gloddy was just .550 of a second behind the victor.

Kermoto/Madden Painting’s Cody Wyman is third in the title chase and 24 points behind Scott. Right now, it’s a two-rider race for the title but that can change in a hurry in races with the top seven separated by half a second.

The second closest championship battle heading into the Pacific Northwest is in the Twins Cup class where Robem Engineering’s Kaleb De Keyrel is just 10 points ahead of veteran racer Chris Parrish and his GCP Suzuki SV650. And Parrish, who has raced in more races than most of his competitors have had hot meals, is just four points ahead of third-placed Teagg Hobbs and seven clear of Jackson Blackmon who is fourth.

Like De Keyrel, Hobbs has won two races, but his tally has been blotted by two DNFs, including a race crash in the last round at Road America. Blackmon, meanwhile, missed the first round with a wrist injury and has since gone on a streak of three runner-up finishes in a row.

The Twins Cup class is also showing parity amongst the three brands competing: De Keyrel is racing the new Aprilia RS 660, Hobbs and Parrish are racing the long-in-the-tooth Suzuki SV650; and Blackmon is aboard the Yamaha FZ-07/MT-07.

Three things you can count on: Death, taxes and Richie Escalante and Sean Dylan Kelly battling to the bitter end for the Supersport Championship. Those two are at it again in 2021 with 11 points separating the two with Kelly leading Escalante, 125-114.

M4 ECSTAR Suzuki’s Kelly made hay while the sun shone with three wins in the first three races. Then Escalante rebounded, despite an early season broken collarbone from a cycling accident, with his first win of the year in round four at VIR on his HONOS-backed Kawasaki.

At Road America, those two were embroiled in a race that may have been the best in series history. It ended in tears, however, on the last lap when both riders lost the front in turn five without touching. The synchronized crash left them both running to their bikes with Escalante winning that battle and finishing fifth with Kelly sixth. The win went to privateer Stefano Mesa, his first-ever in the Supersport class. MESA37’s Mesa is third in the series standings, 35 points behind Kelly.

In race two at Road America, Escalante took off from the start and was never headed in winning his second race of the season. Coming into the Pacific Northwest, it’s anyone’s title.

Fourth place in the points is held by impressive class rookie Sam Lochoff, the M4 ECSTAR Suzuki rider earning his first podium of the year in race one at Road America.

The largest championship points lead in the four support classes is in Stock 1000 and it’s still only 18 points. The title chase is led by Altus Motorsports’ Jake Lewis, the Kentuckian riding the former Cam Petersen Suzuki GSX-R1000 that won last year’s title.

Lewis is 18 points clear of Geoff May, though the Georgian will slip down the standings after opting to miss the west coast rounds at both the Ridge and WeatherTech Raceway Laguna Seca. May is just four points ahead of HONOS HVMC Racing’s Corey Alexander and Travis Wyman Racing’s Travis Wyman with those two tied on points and just one ahead of Michael Gilbert Racing’s Michael Gilbert. So that’s five riders within 23 points of the championship lead.

The Ridge round will also mark the second round of the Mini Cup by Motul Series with youngsters set to compete on the karting track adjacent to the MotoAmerica paddock.

After just one round and two races, the 110cc championship is being led by American Racing Team’s Kensei Matsudaira by 10 points over Warhorse HSBK Racing Ducati new York’s Nathan Gouker. Matsudaira won both races at Road America two weeks ago.

Shedden, however, is atop the standings in the 190cc class after two wins at Road America. American Racing Team’s Joshua Raymond is second – 17 points behind Shedden.

Richie Escalante won the first of two Supersport races last year at Ridge Motorsports Park, but he was taken out of race two on the opening lap in the first corner. Race two was won by Sean Dylan Kelly with Kelly finishing second to Escalante in the first race.

The lone Stock 1000 race last year at Ridge was won by Cameron Petersen by 10 seconds over Michael Gilbert.

Rocco Landers, who went on to win the Twins Cup title, won the Twins Cup race in Washington in 2020 by some seven seconds over Kaleb De Keyrel. Landers also won both Junior Cup races last year en route to taking that title as well.