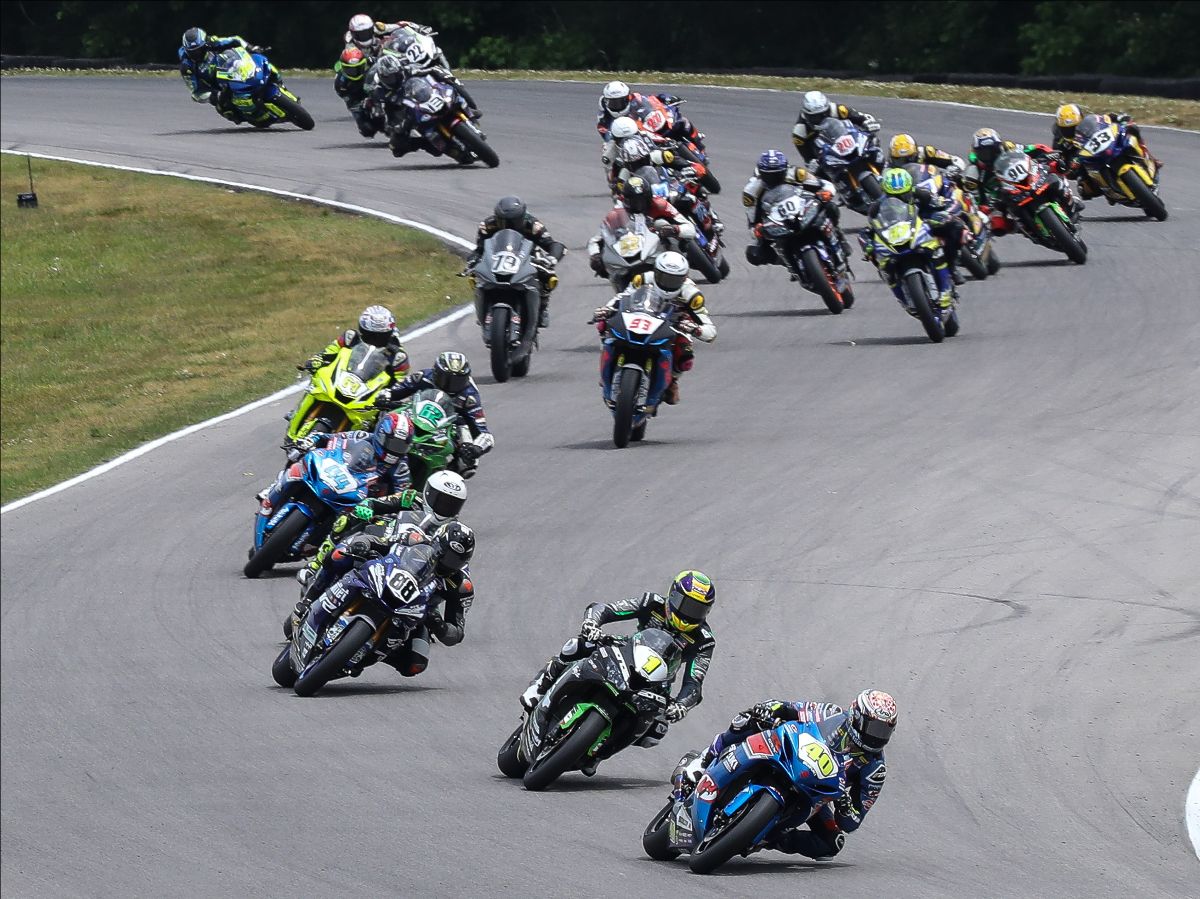 The four miles of Road America racetrack will definitely not be lonely this weekend as the 2021 MotoAmerica Series brings its high-speed show to Elkhart Lake, Wisconsin, for round three of the nine-round championship, with a record-breaking 214 entries set to battle in America’s Dairyland.

In addition to being round three of the 2021 MotoAmerica Series for HONOS Superbike, Supersport, Stock 1000, SportbikeTrackGear.com Junior Cup and Twins Cup, the Road America event will feature round two of the Mission King Of The Baggers and the opening round of the Mini Cup by Motul, which will be held across the paddock at Road America’s karting track.

Two men have won Supersport races thus far in 2021 and they are the same two men who won all the races last year: Richie Escalante and Sean Dylan Kelly. Last year at this time, Escalante had won the first four races and they were all held at Road America. This year, it’s been Kelly and his M4 ECSTAR Suzuki who have gotten off to the fast start with wins in the first three races of the year.

Escalante, who won last year’s Supersport title on his HONOS-backed Kawasaki, comes into Road America with a win under his belt from race two at VIRginia International Raceway.

As was the case last year, these two will battle for the title to the very end and it will be interesting to see if any interlopers venture into their domain.

With Escalante struggling to match Kelly’s pace at Road Atlanta, he was happy to turn the tide in the second race at VIRginia International Raceway to win his first race of the season – despite undergoing surgery to repair a broken collarbone suffered in a cycling accident. Kelly comes to Road Atlanta with a 17-point lead, but there’s plenty of racing to come and Road America should be a dogfight.

Third-best at this point in the season is MESA37 Racing’s Stefano Mesa, the privateer team owner/racer was second and third at VIR and sits 48 points out of the lead. He’s nine points ahead of two-time Junior Cup Champion and 2020 Twins Cup Champion Rocco Landers. The 16-year-old Landers earned his first podium in just his second Supersport race on his Landers Racing/Tyrant Designs/Yamaha/Yamalube-backed YZF-R6 and he’s a point ahead of former fellow Junior Cupper Samuel Lochoff and his M4 ECSTAR Suzuki.

Benjamin Smith is the other rider who has shown the ability to run with the lead duo and he earned his first career Supersport podium at VIR on his North East Cycle Outlet Yamaha YZF-R6.

Forty-six racers have entered the Stock 1000 race for their shot at glory in Wisconsin so expect busy practice and qualifying sessions for those trying to make the cut and those trying to survive the traffic jams.

Altus Motorsports’ Jake Lewis leads the way coming into Road America with the former Superbike rider leading Michael Gilbert Racing’s Michael Gilbert by seven points. Lewis is riding the Suzuki GSX-R1000 that won the championship last year in the hands of Cameron Petersen, who has made the move to the HONOS Superbike class with the M4 ECSTAR Suzuki team.

Ashton Yates is the fifth rider within 20 points of the championship lead, the Georgian finishing on the podium in both races at Road Atlanta on his Jones Honda CBR1000RR-R SP.

One thing that is absolutely guaranteed in this year’s SportbikeTrackGear.com Junior Cup class at Road America… there will be a new champion in the class. That’s because both two-time champion Landers and the man who won three of the first four races at Road America, Dominic Doyle have both graduated to the Supersport class.

Gloddy has won twice so far this year, in race two at Road Atlanta and race one at VIR. The Landers Racing rider holds down the championship points lead by 16 points over Scott and his Scott Powersports/KTM. Scott won the very first race of the year – and his first career MotoAmerica race – at Road Atlanta. Wyman, meanwhile, won race two at VIR for what was his first MotoAmerica race victory. Wyman is third, 25 points behind Gloddy.

Twelve points separate the top five riders in the 2021 Twins Cup Championship and any of the top 10 in the series standings is capable of winning races.

Innovative Motorsports/Mike’s Import’s Teagg Hobbs leads the way coming into Wisconsin with 63 points and two victories on his Suzuki SV650. He holds down a nine-point lead over Pure Attitude Racing’s Trevor Standish, with the SV650 rider just one point ahead of Righteous Racing’s Jody Barry and Robem Engineering’s Kaleb De Keyrel. Both Barry and De Keyrel join Hobbs as race winners four races into the series and both are both racing the new Aprilia RS 660 as the series is turning into a Suzuki vs. Aprilia Championship, though we can’t count out the Yamaha FZ-07/MT-07 of Jackson Blackmon, who is sixth in the series and just 23 points out of first despite missing the first two races due to injury.

Mission King Of The Baggers: Feel The Noise

Like a little not-so-friendly rivalry between manufacturers? Then sit back and enjoy the Mission King Of The Baggers, with the class set to make its Road America debut this weekend after opening its season at Road Atlanta.

This series is all about rivalry: Harley-Davidson vs. Indian. Indian vs. Harley-Davidson. No matter how you look at it, it’s interesting and both are hellbent on beating the other.

So far, Indian has had the upper hand with Tyler O’Hara winning both the debut of the class last year at WeatherTech Raceway Laguna Seca and the 2021 series opener at Road Atlanta. While O’Hara ran off track at Laguna and still hunted down and passed Vance & Hines Harley rider Hayden Gillim, he had his hands a bit fuller when Harley-Davidson brought a full factory effort to Road Atlanta with Superbike racer Kyle Wyman leading a lot of the race before giving way to O’Hara.

Harley is serious, though, and both the factory team and the Vance & Hines team are expected to add second riders to their stable for this weekend’s race at Road America. Indian has already established that they have the upper hand. Now it’s time to see if they keep it.

The youngest racers in MotoAmerica will start their season this weekend on the karting track at Road America as the Mini Cup by Motul Championship gets under way with a full slate of racing action on Saturday.

The Mini Cup by Motul features three classes of racing: 190cc, 160cc and 110cc. With the dominant Rossi Moor no longer racing in Mini Cup, the championship in the 190 class is wide open, led by the rider who ended up second to Moor last year – Jesse James Shedden. Shedden also finished third in the 160cc class to Mikey Lou Sanchez and Moor with Sanchez also taking the 110cc crown in 2020.

Rocco Landers was a bit shell-shocked at Road America when he lost the first three Junior Cup races of the season to Dominic Doyle. Landers won the fourth race at Road America, however, and never looked back in racing to his second consecutive title in the class. Landers, meanwhile, won his first career Twins Cup race in race three at Road America and eventually captured that title as well. Thus, the 16-year-old moves to the Supersport class this year with three MotoAmerica titles on his resume and 38 wins (29 in Junior Cup, nine in Twins Cup).

The SportbikeTrackGear.com Junior Cup lap record at Road America is owned by Rocco Landers with his 2:39.192 set in the second event in Elkhart Lake in June; the Twins Cup lap record is owned by Kaleb De Keyrel, a 2:27.355 also coming in the June race; the Supersport lap record at Road America is still held by Garrett Gerloff, who lapped the four-mile circuit in 2:17.675 in 2017; the Stock 1000 lap record is the domain of PJ Jacobsen with the New Yorker lapping at 2:15.047 last year.