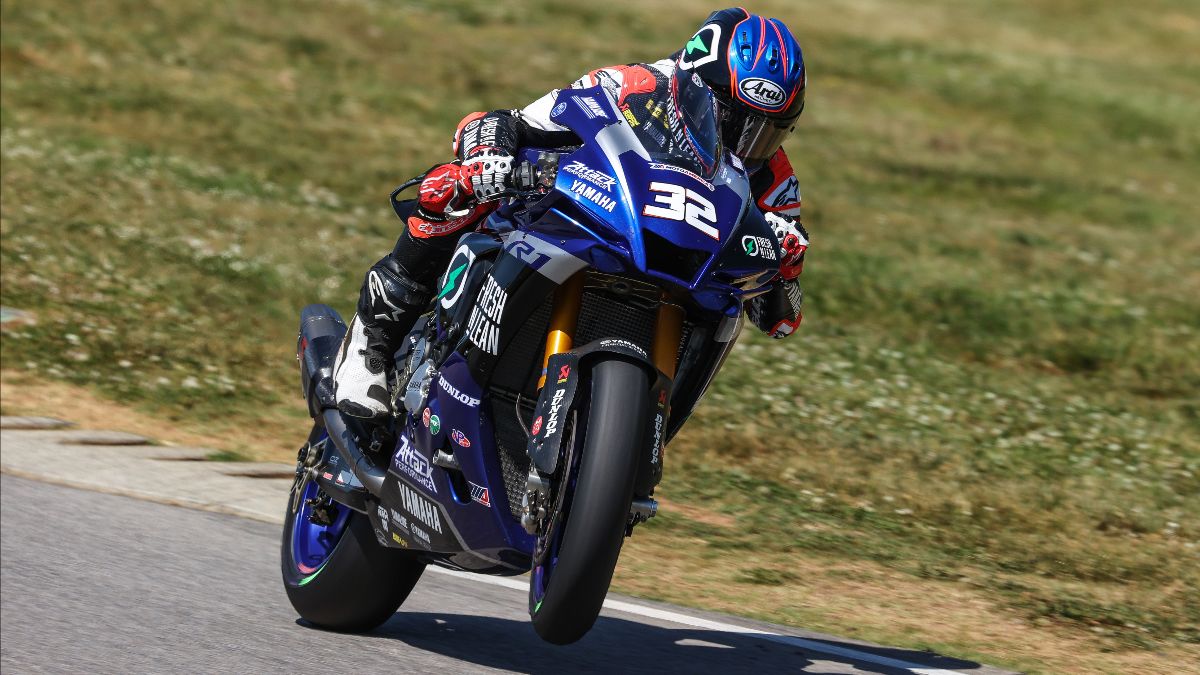 MotoAmerica has held 14 Superbike races at Road America since it took over the AMA Superbike Series in 2015. The average margin of victory from those 14 races is just 2.49 seconds, and that includes Cameron Beaubier’s three runaway wins last year of 7.8, 14.4 and 6.32 seconds.

Plain and simple: Those three races were anomalies. So, if we throw those three dominating wins by Beaubier out the window, the average margin of victory for the remaining 11 MotoAmerica Superbike races is a scant .669 of a second. Yes, .669 of a second.

The closest HONOS Superbike race in those 14 races? That would be Beaubier’s victory over Josh Herrin in race one in 2018 – .002 of a second. The next day, Beaubier did the dirty on Herrin again – by .195 of a second.

Guess you can understand why the MotoAmerica Series heads to the picturesque, high-speed venue in Elkhart Lake, Wisconsin, expecting ultra-close, nail-biting racing in all classes. After all, it’s the Road America way.

Last year, with COVID-19 wreaking havoc, MotoAmerica was forced to reschedule and that meant racing not once but twice at Road America with unprecedented back-to-back rounds separated by a month with the races taking place at the end of May and end of June. And no one complained – such is the popularity of the long-standing weekends at “America’s National Park Of Speed.”

As previously mentioned, Beaubier won three of the four HONOS Superbike races at Road America in 2020 and only a crash out of the lead in race four prevented a perfect four-race rampage in Wisconsin. When Beaubier crashed, the lead and ultimately the victory fell to M4 ECSTAR Suzuki’s Bobby Fong – and it marked the Californian’s first-career AMA Superbike win. So, with Beaubier now contesting the Moto2 World Championship, does that make Fong the favorite heading to Road America this week?

There is this one niggling problem by the name of Jake Gagne, the winner of three of the four HONOS Superbike races held thus far in 2021. Gagne, who finished second twice in Road America’s four races last year (including ending up right behind Fong in the fourth race), comes into Wisconsin with the smoking hot hand with his three wins on the Fresh N’ Lean Attack Performance Yamaha YZF-R1.

Although Gagne has done the most winning so far in 2021, he’s not leading the championship. That spot is held by Westby Racing’s Mathew Scholtz, the South
African with one victory, two seconds and a third thus far in his consistent start to the season. He leads Gagne, who has a DNF on his scorecard in the title chase, albeit by just seven points.

With three thirds and a fourth-place finish, Gagne’s teammate Josh Herrin is third in the point standings. Herrin has tasted Superbike victory before at Road America with a win in race two over Beaubier (by just .506 of a second). He trails Scholtz by 20 points after four races.

The aforementioned Fong sits fourth, the Suzuki GSX-R1000-mounted rider starting the season with a second-place finish but struggling a bit since then with two fifth-place finishes bookending a mechanical issue at VIRginia International Raceway that pushed him down to 12th in race one.

Non-defending MotoAmerica Stock 1000 Champion Cameron Petersen is tied for fourth in the title chase with his teammate Fong after his consistent start to the season hit a bit of a bump in the road in race two at VIR when he was involved in a first-corner melee that left him well behind. He fought through to finish seventh, but it ruined his streak of top-five finishes in his first season on the M4 ECSTAR Suzuki GSX-R1000 Superbike.

Six points adrift of the Suzuki teamsters is Panera Bread Ducati’s Kyle Wyman, who in turn finds himself just three points ahead of Scheibe Racing BMW’s Hector
Barbera – a MotoAmerica rookie in 2021.

Another series rookie with an immense international racing background is Warhorse HSBK Racing Ducati New York’s Loris Baz, the Frenchman competing in his first season of racing in the U.S. series. Baz’s season started out with two non-finishes at Road Atlanta, but he turned that around at VIR with fourth- and second-place finishes. He’s got a long way to go to catch those at the top of the point standings, but Road America should suit the fast Ducati Panigale V4 R well and both Baz and Wyman should be able to let the Big Red (and in Wyman’s case, green) Dogs eat.

Travis Wyman Racing’s Travis Wyman and Altus Motorsports’ Jake Lewis round out the top 10 in the series standings heading to Road America with those two sitting first and second in the Superbike Cup standings, a class within a class for those riding Stock 1000-spec motorcycles.

In total, there are 36 entries in the HONOS Superbike class for Road America.

In addition to his race wins, Beaubier is also the Superbike lap record holder at Road America with a 2:10.623 lap set during Superpole for the June race in 2020. Beaubier also holds the race lap record with a 2:11.033 set in race two of the May race weekend.

As far as manufacturers go, Yamaha has the most wins at Road America with 22 followed by Suzuki with 18, Honda (12), Ducati (eight) and Kawasaki (four). Yamaha had won seven of eight races until Suzuki swept both races in 2019 with Toni Elias and Josh Herrin. In 2020, however, Beaubier and Yamaha chalked up three more wins before Fong gave Suzuki another victory in race two in the June event.

Riders from nine different countries will line up at Road America in the HONOS Superbike class with the U.S., Spain, South Africa, Great Britain, Mexico, Uruguay, France, Australia and Brazil all represented.

The official track length at Road America is 4.048 miles, which makes it the longest on the MotoAmerica schedule. The track features 14 turns and is affectionally known as “four miles of fun.”

Twelve years ago, Larry Pegram won the Superbike race at Road America, giving Ducati its last Wisconsin win in the Superbike class. Pegram won a race-long battle with Mat Mladin to take that victory. Well, that was 2009 and this is now and Pegram is back and set to race a Pegram Racing Ducati Panigale V4 R in both Stock 1000 and HONOS Superbike.