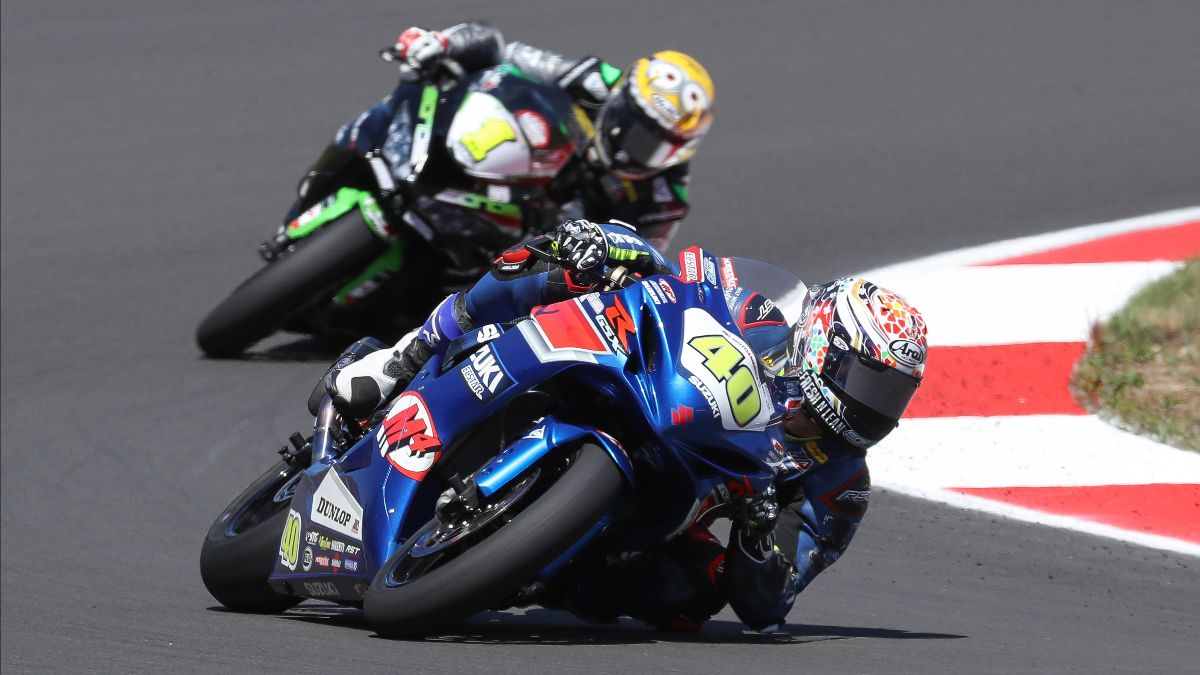 With temperatures soaring into the triple digits in the Pacific Northwest, nothing came easy for those trying to win races on Saturday at Ridge Motorsports Park.

But win they did. In Supersport, Sean Dylan Kelly got the better of his rival, Richie Escalante to win for a fourth time on the season; Jackson Blackmon won his first-career Twins Cup race; ditto for Max Toth in the SportbikeTrackGear.com Junior Cup; and Corey Alexander gained some ground on Jake Lewis in the Stock 1000 class.

Supersport: SDK Does The Business
M4 ECSTAR Suzuki rider Sean Dylan Kelly started from the pole in Supersport race one, and as anticipated, the usual battle that Kelly has with defending class champion Richie Escalante quickly materialized. Escalante, aboard his HONOS HVMC Racing Kawasaki, tried to overtake Kelly, but he was never able to get close enough to finish the move and, in fact, Kelly not only maintained the lead from start to finish, but he built a gap of over a second at the checkered flag. Altus Motorsports Suzuki’s Kevin Olmedo, who missed the first two rounds of the season due to a shoulder injury suffered while training, finished third for his first podium result since the first Supersport race of the season last year.

“That was a really difficult race,” Kelly said. “It was so hot out there, super physical. Richie (Escalante) was on me the entire race and never let go of me. It was super tough. I tried to keep the best pace I could. I didn’t go as fast as I was expecting for myself. I think the conditions were just so tough. Good thing is, I was able to be super consistent up until the last lap. I think that’s what got us the win today. I made a really big mistake putting a false neutral. I made a few other smaller mistakes through turn 13 and a few other corners. I need to gather myself up and change a couple things for the warmup to make that a little bit more consistent. Overall, I’m really happy we got the win today. We pushed through it, one of the hardest mentally and physically races, for sure, with this weather. Happy with the work we did.”

Stock 1000: Alexander Over Lewis
In Stock 1000, which was the first race of the day on Saturday, Altus Motorsports Suzuki rider Jake Lewis started from the pole in the 13-lap race, and he looked to have the measure of the field. With less than three laps to go, HONOS HVMC Racing Kawasaki’s Corey Alexander, who was gaining ground on Lewis lap by lap, overtook the Kentuckian and made it stick. Alexander crossed the finish line a little more than one second ahead of Lewis, who finished second. Third place went to Chuckwalla Valley Raceway/Octane Lending Kawasaki rider Michael Gilbert.

“In qualifying two, first off, we didn’t run our race tire until qualifying two,” Alexander said. “We changed a lot of things in qualifying two and during that, we had an issue pop up. It kind of prevented me from really qualifying where I think I was capable of. Ultimately, going into the race, I knew the first few laps, it was going to be important just to kind of stay out of trouble and get through turn one, obviously. That’s always the most important part of the race here. Once I got through those guys, I could kind of see everyone was struggling with rear grip, and I think even a little with front grip. The laps we’ve been doing yesterday, we’d done quite a few laps with the tires. I kind of had a pretty good flow once things settled in. That’s all I did. I honestly didn’t think I would catch Jake (Lewis). It’s hard when you’re behind that many guys to gauge how fast you’re going compared with the leader. It wasn’t until I really got into second that I could kind of see. Take a little bit here, a little bit here, and then, all of a sudden, the gap started getting smaller and smaller. I thought, for sure, maybe he was just maintaining it, and he wasn’t expecting me to come up as quick as I did, and he’d have something more for me. But it’s hot out there, and the track is getting greasier and greasier by the minute.”

Twins Cup: Blackmon’s First
The air temperature approaching 100 degrees had a varying effect on all of Saturday’s races at Ridge, but in Twins Cup, where the bikes are modded more than in any other class to extract maximum horsepower from the twin-cylinder engines, there was a lot of attrition in race one with nearly half of the riders unable to finish the race.

Jackson Blackmon Racing Yamaha’s Jackson Blackmon seemed almost completely unaffected by the heat. The South Carolinian won his first Twins Cup race by .215 of a second over Robem Engineering Aprilia rider Kaleb De Keyrel. Anthony Mazziotto, who started from the pole and looked to be headed for victory, was one of riders failed finish the New Jersian crashing out of the lead on lap eight. After Mazziotto went out, De Keyrel led the race for two laps until Blackmon overtook him with two laps to go. Third place went to Innovative Motorsports/Mike’s Imports Suzuki rider Teagg Hobbs.

“The past few rounds have definitely gotten my confidence up,” said Blackmon. “I’ve been so close. The last couple years, just kind of getting down on myself. I wasn’t getting the results I was hoping for. This year, between me and my dad and Yamaha, we put the program together that was perfect. I knew we could do it this year. The bike has been different at every round, setup-wise. This weekend, we had it working perfect. I didn’t even make a change before the race. I thought I was able to just ride the thing. Those guys were pushing hard. I almost was going back just a little bit and I was like, ‘the win is right there.’ I can’t stop. I was able just to reel them in and just make it happen at the perfect time. That Yamaha was riding so strong. A big thank you to Yamaha. A big thank you to all my family that’s behind me – my grandparents, my mom, my dad, just everybody. Big thank you to my girlfriend, Chloe. She’s been behind me through all of this and seen me at some low points even when I didn’t think I was racing this year. So, to be here and to get my first Twins win is just incredible. I’m lost for words. I hope I’m not forgetting anybody. Thank you to everyone that has gotten me this far. Also, big thank you to Yamalube. That thing didn’t even overheat at all that whole race, it just stayed right in the range.”

SportbikeTrackGear.com Junior Cup: Toth Gets It Done
Saturday’s races at Ridge Motorsports Park wrapped up with SportbikeTrackGear.com Junior Cup race one, and MotoAmerica’s entry-level riders put on a great show. Veloce Racing Kawasaki rider Max Toth, who joined the MotoAmerica series for the final round of the 2020 season at WeatherTech Raceway Laguna Seca, got the first win of his MotoAmerica career after recording a podium finish at both VIRginia International Raceway and Road America earlier this season. Toth took the lead on the final lap of the 11-lap event and won by 1.527 seconds over Landers Racing Kawasaki rider Ben Gloddy, who inherited second place when polesitter Tyler Scott was penalized five seconds for cutting the track. With the time added to his result, Scott was moved back from second place to fourth in the results, and Veloce Racing Kawasaki’s David Kohlstaedt was credited with third place.

“I’m really happy with this result,” beamed Toth. “This is what we were chasing since the first race of the season, so to get it now, it’s a great achievement. I knew pretty much halfway through the race that I had the speed to get to the front. The only thing I was uncertain about was whether I’d be able to stay there. I didn’t know once I got to the front if Tyler was going to show me a wheel or not. I just stuck to my plan and came out okay.”