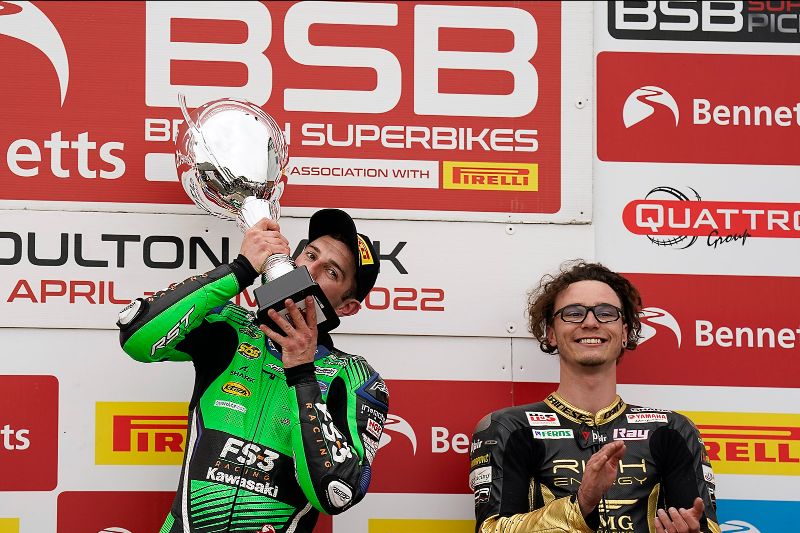 Lee Jackson became the third different winner in the 2022 Bennetts British Superbike Championship, celebrating an emotional first race victory at Oulton Park onboard the FS-3 Racing Kawasaki; whilst Bradley Ray delivered a second victory and a podium finish to capture the lead in the standings.

Ray was building on his momentum from yesterday’s race victory claiming a second win in race two earlier in the day for the Rich Energy OMG Racing Yamaha team.

Ray got a lightning start off the line to lead the pack ahead of his teammate Kyle Ryde and the FS-3 Racing Kawasaki pairing of Jackson and Rory Skinner.

Ray continued to try to break the chasing pack, but a crash for Luke Mossey on lap eight at Druids meant that the BMW Safety Car was deployed.

The Rich Energy OMG Racing Yamaha rider held his focus when the race resumed and once again clawed a slight advantage over the field.

The chasing pack were scrapping for second and Ryde was under pressure from Jackson, Skinner and Leon Haslam, who had also joined the battle in the closing stages.

Jackson made his move on Ryde on lap 15 as he dived for the inside line at Knickerbrook and then Haslam was ready to strike.

As Jackson held second, Haslam made a move on Skinner on the penultimate lap and only had Ryde standing between himself and a return to the Bennetts BSB podium.

The VisionTrack Kawasaki rider made a big move into Shell for the final time and held third place to the chequered flag to claim his first podium finish in the championship since his 2018 title win.

Ryde was forced to settle for fourth ahead of Skinner as Jason O’Halloran held off Christian Iddon for sixth place with Peter Hickman, Glenn Irwin and Josh Brookes completing the top ten.

The final race of the weekend created a new race winner in the championship as Jackson delivered an inch perfect performance to stand on the top step of the podium for the first time.

Ryde had led the pack off the line before his Rich Energy OMG Racing Yamaha teammate Bradley Ray moved ahead, but a crash for Tom Neave at Old Hall instigated the deployment of the BMW Safety Car for the start of lap two. The Honda Racing UK rider suffered concussion and was transferred to Stoke hospital for further scans.

The race resumed on lap four and Ray and Ryde led the pack from Skinner, Jackson and Tommy Bridewell. Andrew Irwin crashed out unhurt as Tom Sykes was forced to take evasive action in the middle of the pack.

Ray had made a break, but as the laps counted down Bridewell had made his way into third behind Jackson and the pair were closing the advantage. Ryde meanwhile faded in the second half of the race to finish in tenth, but the battle for the podium positions was intensifying.

By lap 13, Bridewell and Jackson had closed down on Ray and were piling the pressure on the double race winner. A lap later, Bridewell fired the Oxford Products Racing Ducati ahead on the run down to Island Bend and Jackson also pushed him back a further position with a move at Knickerbrook.

Jackson had his sights firmly set on a debut win in the Championship and a lap later, he dived ahead on the inside of Bridewell with a decisive move at Shell Oils corner.

Jackson then held on and eased an advantage of 2.909s at the chequered flag with Bridewell becoming the eighth different podium finisher of the season so far.

Ray completed the podium with a third place to seal the Milwaukee Race of the North trophy. He remains in contention to win in the Milwaukee Spring Grand Slam if he can secure at least two race wins at Donington Park.

Skinner had another strong performance to finish in fourth place, narrowly ahead of Haslam who completed the top five for VisionTrack Kawasaki team.

O’Halloran was sixth on the lone McAMS Yamaha ahead of Glenn Irwin and Brookes whilst Hickman and Ryde completed the top ten. 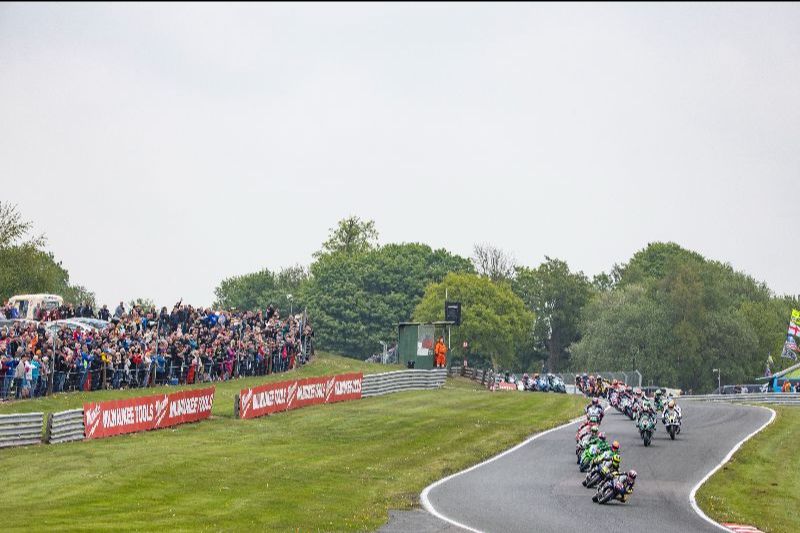 Bradley Ray
Rich Energy OMG Racing Yamaha
Championship leader and Race 2 winner
“It has been a great weekend for us and it feels good to leave with the championship lead. The last race was difficult; I tried to put in as many fast laps as I could and pulled a gap but I struggled a bit in the latter part of the race. I tried everything I could but I just couldn’t hold the gap.

“I gave it everything and Lee had unbelievable pace at the end of the race so congratulations to him. I was happy to have another podium, it wasn’t another win but it has been a good weekend for me.

“I am happy going to any track now with the Rich Energy OMG Racing Yamaha and I am feeling good in myself, so I am looking forward to a reboot and be ready to go again at Donington Park.”

Lee Jackson
FS-3 Racing Kawasaki
Race 3 winner
“The race for me started a bit slow and I didn’t actually feel that great. I struggled to get into a comfortable rhythm as the pace was really fast. Once Tommy Bridewell passed me I found the rhythm I needed straight away and gave me that edge to get to the front.

“Tommy did a lot of the hard work chasing Brad down and as soon as we got to him, I saw that the pace had dropped. I knew I had the pace so I just made the passes as soon as I could as the laps were counting down and I knew I had to try and break him.

“I tried to relax on the last lap and we have worked hard as a team to get this win today. I work hard and I am my own biggest critic and I feel like I am good enough now. I want to keep this ball rolling now so maybe a cheeky cider and a McDonalds to celebrate tonight!

“We have got the bike working well now and moving to Donington Park, I feel like we will still have the pace to have another good weekend there.” 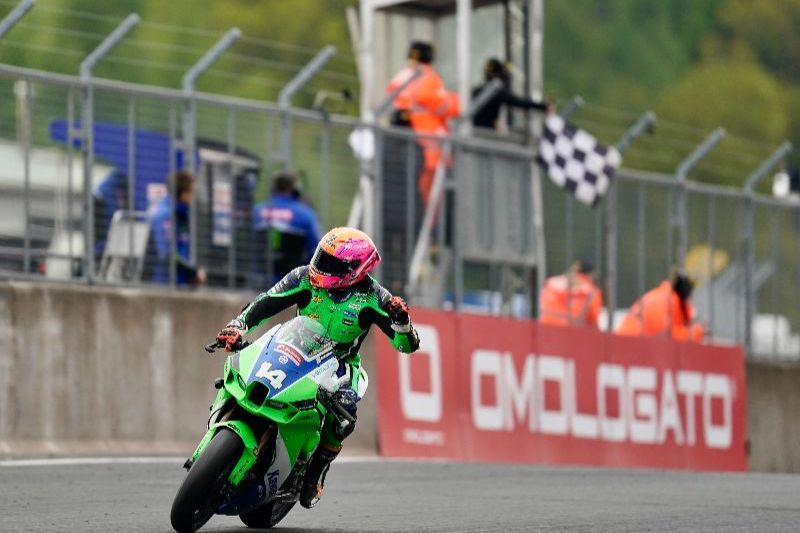