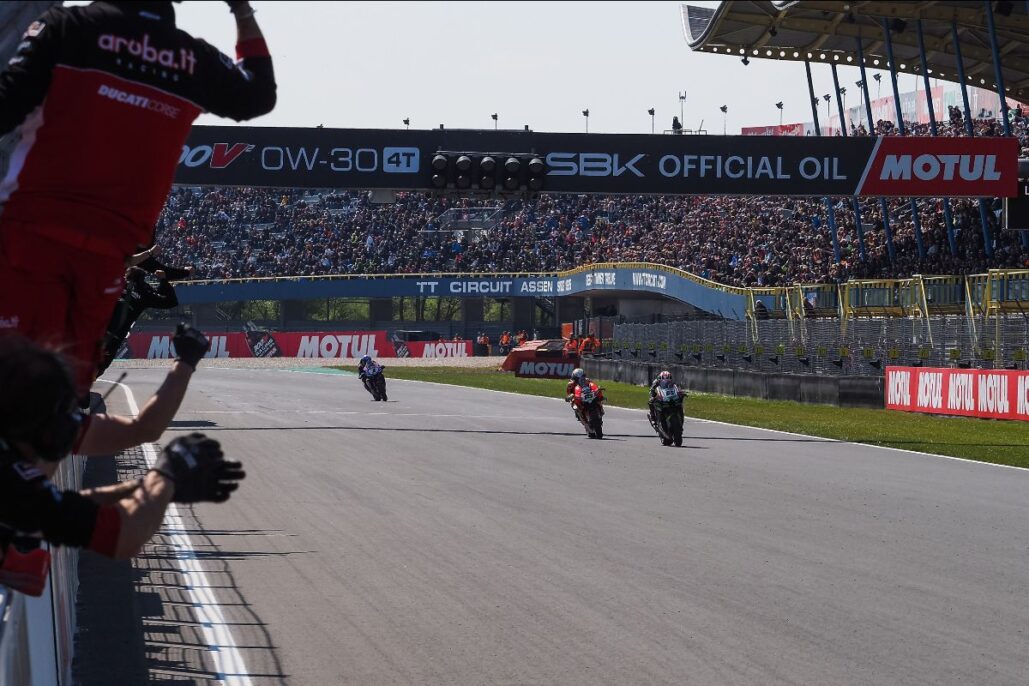 It was a three-way battle between Rea, Bautista and Razgatlioglu with the six-time World Champion eventually claiming the win.

Starting from third place, Jonathan Rea (Kawasaki Racing Team WorldSBK) soon found himself at the front of the field after passing Razgatlioglu. After battling with Razgatlioglu and then with Bautista in the last part of the race, Rea was able to hold on the Spanish rider to claim the win. The six-time WorldSBK Champion explained: “It was so tough. Both Alvaro and Toprak were super strong, especially in that middle part of the race. The gap on my pit board was always so small. I understood that I was in front. In the end, we could get it done. A big team effort because we changed the bike quite a lot since Aragon. It’s more of an Assen bike, it’s flowing a little bit better here. It shows that our ZX-10RR is working in a bigger window and that’s really positive.” Rea is now one win away from 100 wins with Kawasaki, as he recovered the Championship lead by 2 points. “If it’s not tomorrow, I’m sure it’s going to happen at some point this season. We can be very proud of our partnership together and look forward to many more race wins” he added.

Alvaro Bautista (Aruba.it Racing – Ducati) finished in second place 0.103s behind Rea. After passing Razgatlioglu for second place, he aimed to attack the six-time WorldSBK Champion on the final lap of the race. Bautista commented: “Starting from the second row, I had to battle with some riders. When I saw that Jonathan and Toprak were creating a gap, I passed the riders in front, and I tried to reduce the gap. In the last chicane, Jonathan was breaking really well so it was really difficult to overtake him. I tried to get closer to try to overtake him, but it was too risky. Second position is a good result. Our performance has been positive today.”

Reigning WorldSBK Champion Toprak Razgatlioglu (Pata Yamaha with Brixx WorldSBK) completed Race 1’s podium, one second behind the race winner. The Turkish rider started from pole position and made a good start before dropping some positions. He battled with Rea and Bautista, before the two others managed to escape in front. Razgatlioglu explained: “I tried my best but, in the race, I was feeling some tyre problems. We are again on the podium; we take good points for the Championship. We were trying our best today. I need to win now. I’m always in third position, but for me this isn’t enough. Tomorrow I will fight for the win again. It won’t be easy because everybody is very fast, Alvaro and Jonny are very fast.” Discussing how he plans to end the win drought, Razgatlioglu said, “Tomorrow, I will change the plan for the race. In this race, I followed Jonny and maybe tomorrow I ride alone. I don’t know, we will see.”

Andrea Locatelli (Pata Yamaha with Brixx WorldSBK) finished in fourth place despite having fought at the front in the early laps. He was 8.7s behind teammate Razgatlioglu but also 7.7s clear of Lecuona. Locatelli said: “It was a good race for us today because we closed on other people. For sure, it was not easy in the middle of the race to try to stay with the front group. We improved a lot this morning and, in the end, I could stay around the first 10 laps with the first group.” His objective for tomorrow is clear; “We now have lot of data to try to prepare the bike for tomorrow. I want to try to stay with the front guy until the end of the race.”

Iker Lecuona (Team HRC) was fifth, claiming his first WorldSBK top five for Honda. He explained: “I started the weekend strong but in FP2 I had a big crash in Turn 3, and this morning I crashed in Turn 9 when I was trying the race pace with qualifying tyre to prepare for tomorrow. I didn’t like the new front tyre I tried and crashed. I lost a bit the feeling after that. We stayed calm. I had a strong fight with Baz, and I finish fifth so I’m really happy. The pace is better than yesterday, except in the last two laps.”

Loris Baz (Bonovo Action BMW) completed the top six as the first BMW rider and Independent rider. Baz enjoyed his first top six of the season whilst chasing Lecuona for a top five. Following today’s results, he now stands as the first Independent rider in the Championship standings. He commented: “We started the race with no more than three laps in a row yesterday, so I wasn’t confident with the pace. But I knew we found something in FP3 as I did a good Superpole. So, I just brought the best the best result of the team. We took top Independent, it’s not something I’m really happy about but it’s super important for the team and BMW. At the moment, we want more but we are in the right direction.”

To note:
Alex Lowes (Kawasaki Racing Team WorldSBK) had been running in the top five during the race but had to pull into the pits at the end of Lap 11 with a technical issue.

Michael Ruben Rinaldi (Aruba.it Racing – Ducati) was another who had been running in the front group, but a Turn 5 crash in the closing stages meant he did not finish the race. 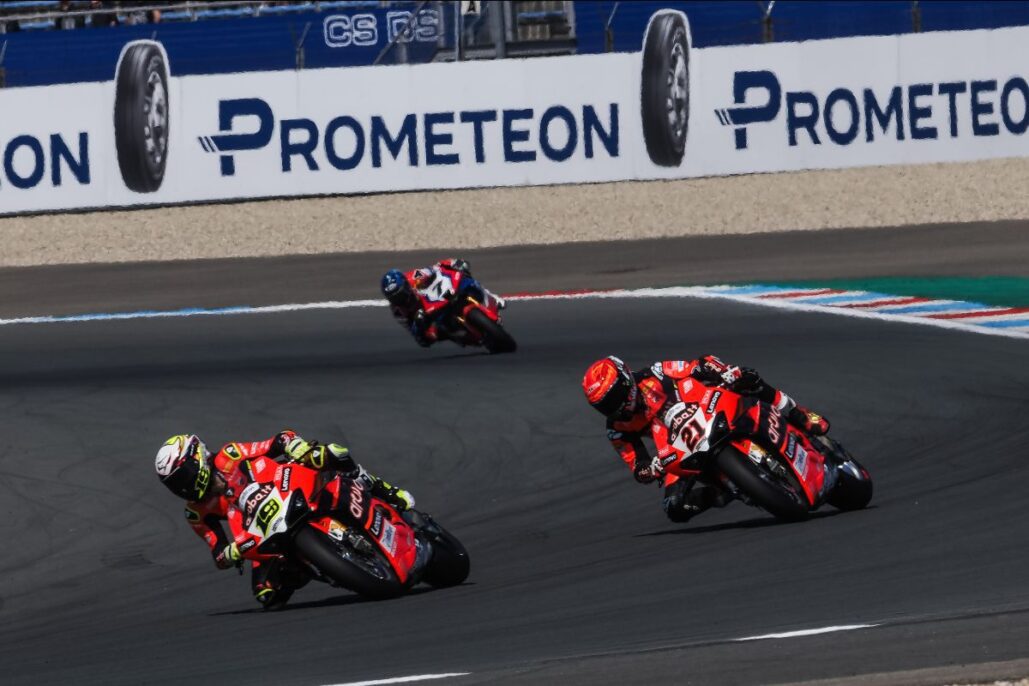 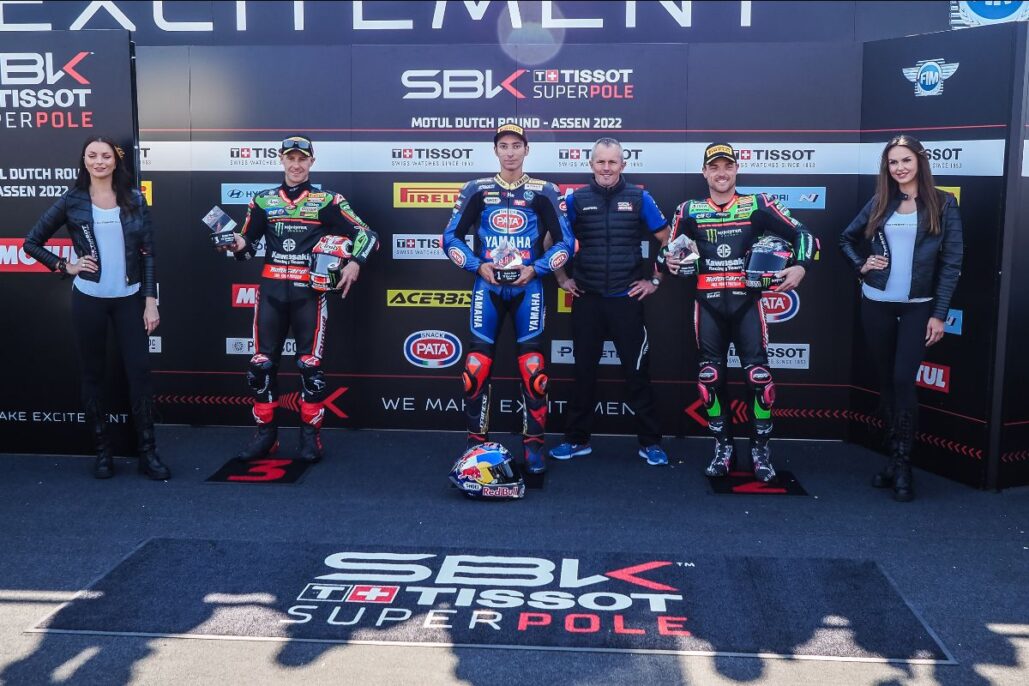