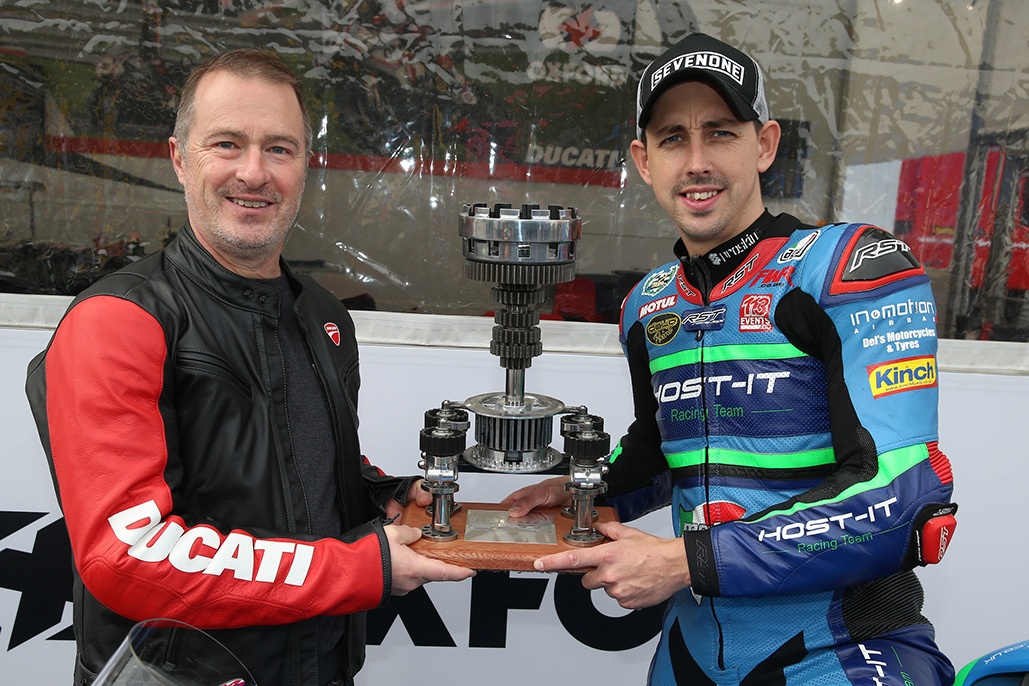 Josh Day started the race strongest and grabbed the holeshot from Levi Day and Dijon Compton, with David Shoubridge (AH Performance) and Sam Cox (Sam Cox Racing) chasing the leaders down, but after the opening lap Josh Day had pulled a 0.8 second gap.
Drama struck on Lap 2 when John McGuinness (Lund Group) high sided out of the race with Pinson having to avoid the fallen rider.

By half race distance Levi Day had closed the gap down to half a second, but Championship leader Josh continued to hold the advantage over his closest rival.

But with three laps to go Josh Day’s bike began to develop a gear shift problem, allowing Levi Day to take the lead and the race win. Josh Day managed ride around the issue to take 2nd ahead of another strong showing by Pinson in 3rd.

Race 2
It was Shoubridge who grabbed the holeshot for the final race of the year after making a fantastic start from the 2nd Row. But after the opening lap it was Levi Day who led the way ahead of Pinson, with Shoubridge in close proximity and defending champion Josh Day down in 7th.

By half race distance Pinson took over at front as he looked to take his maiden Ducati Cup victory, but he then became embroiled in a battle with Levi Day, with Shoubridge just behind. On the final lap Levi Day made his way past Pinson to retain the lead and with it his fifth win of the season. Pinson crossed the chequered flag in 2nd, with Craig Neve (CN Racing) claiming the final podium position.

Josh Day (Host-it.co.uk Racing Team #1) Race 1, 2nd – Race 2, 5th
2019 & 2020 Ducati Performance TriOptions Cup Champion
“It’s brilliant. We’ve had a mega year, been real strong and pretty much the pace setter at every round in my eyes. When I’m out at front we’re on the lap record pace and when other people are out at front, we’re half a second, a second off. I feel really good, really confident.

The new bike’s good. The old bike is still good, but the new bike is brilliant. It’s a serious championship so to win it two years in a row is mega. All my team have done a great job and Moto Rapido are prepping our bike. They do a good job of making it turn up like it’s brand new every week. Big thanks to them, and to all my personal sponsors and Host-it.co.uk. Fingers crossed we’ll be back next year.”

Levi Day (BPS Racing #57) – Race 1 & 2, 1st
“Happy to take the win again, 5th win of the season. Did what I could to try and stop Josh, but we knew it was going to be a hard gap to close. He only had to finish 11th or better and he hasn’t finished lower than 2nd all year. Hats off to Josh, he rode a really consistent season. I knew I had to win the race today. Me and Elliot had a really good race, really enjoyable and that’s probably the best I’ve seen Elliot ride all year. He’s been very strong but that’s been definitely his strongest ride. Nice to end the season in style and big thanks to all the sponsors, AJN Steelstock, Boast Plumbing Supplies, Bathgate and everyone that helps make it all possible. Couldn’t do it without you so thank you very much.”

Elliot Pinson (Symcirrus Motorsport #75) – Race 1, 3rd – Race 2, 2nd
“I was following Levi for the first couple of laps in that last race. I felt like I had a little bit more pace, so I decided to make a move and then I led for most of the race. I managed to pull out about half a second at one point, but Levi managed to pull it back. I was struggling with some rear tyre grip, so he managed to pull it back, but I managed to keep him behind me until the second from last lap. He made a move and tried my hardest, but he got me on this one. I’d like to dedicate this one to my mate Gary who would have been here this weekend but sadly he passed away. So, this one’s for you.

Craig Neve (CN Racing #2) – Race 1, 6th – Race 2, 3rd
“Really good race, really enjoyed this one. I got a podium at Donington, it’s been a long season trying to get back here. Fortunately, I can enjoy this one because we had to rush for the Superstock last time. Really good. Thanks to Pete, Rob, my dad, Marco for putting on a great bike all season. The bike’s always been good, I’ve just had to just find a little but more in myself. Really good to end the season on that, we’ll look forward to next year now.”