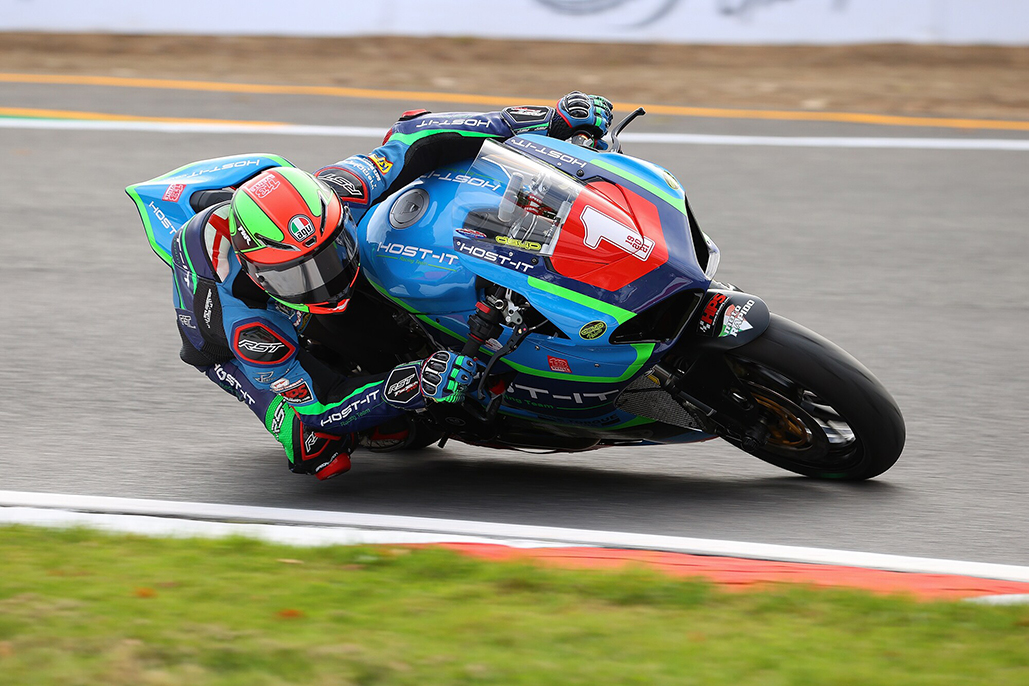 Josh Day wraps up his winning Ducati Cup season in style, sharing a win with Chris Walker at Brands Hatch.

Race 1
Chris Walker (4T2 Racing) claimed his second win of the season at Brands at the final British Superbike Round of the season on Saturday. Mixed weather conditions meant the race was declared wet with David Shoubridge (Rich Energy Ducati) starting from pole for the first time this season. Shoubridge led for the early stages of the race, but his wet tyre choice proved to be the wrong one and after having a moment on Hailwood on the run up to Druids, Walker was able to make a pass into Graham Hill to take the lead.

Walker went on to take the flag with 4.5s gap over Craig Neve (CN Racing), with John McGuinness (Blue Earth Construction) a further 12.9s down the road claiming his second podium finish of the season.

Alberto Solera (Solera Sport) got his best result of the year to date with fourth to keep his R&G Ducati Shield hopes alive, with his rival Carl Stevens (Freeman Harris Solicitors Ducati) finishing outside the points for the first time this season in 22nd, in part due to having to rebuild his bike following a crash in free Practice on Friday.

Josh Day who claimed his third consecutive title last time out on the Host-it.co.uk Racing Team Panigale V2 pitted during the race with a rear brake issue but was able to get back out on track to put in the fastest lap to ensure he would start from pole on Sunday.

Race 2
Walker got the holeshot, but it was Day who led the field as the riders started their second lap around the Brands Hatch GP circuit.

The race was interrupted with a safety car following several crashes during cold and damp conditions. But the interruption failed to distract Day who crossed the chequered flag to take his eleventh win of the season. Walker, McGuinness and Shoubridge were all within a second behind, with Walker and McGuinness both stepping onto the podium for the second time together.

Josh Day (Host-it.co.uk Racing Team #1)
2019, 2020, 2021 Ducati Performance TriOptions Cup championship – 1st
“A much better race today than yesterday, where we had a rear brake issue to force us to pit, but we went back out and set pole for today’s race. Today’s race was similar conditions to yesterday, damp track – not great. I followed Chris and tried to get close to him and soon realised there was loads of grip out there and made my move on him and got my head down. The times were coming down and I really wanted to get the lap record, and even with the damp conditions and we were close. It was a shame the safety car came out but there were a few issues but hopefully everyone is alright.

It is brilliant to end the year with a win and the eleventh win of the year. It’s not bad is it? So, massive thanks to the Host-it guys again and Andrew for giving me this opportunity for the last three years. it’s been immense.”

Chris Walker (4T2 Racing #9)
2021 Ducati Performance TriOptions Cup championship – 2nd
“It’s been phenomenal really; I have said before it started out as a bit of fun. It was just one phone call and then it spiralled from there. Then we went to the first test, way back, I was more on the pace than I thought I would be. The bike, I didn’t know what to expect. I had never ridden a Ducati V2, the last time I rode a Ducati was 2003 in the World Championships, so I genuinely didn’t know what to expect. I am a bit more portly than I used to be, I broke my back a few years ago and never got back to being super-fit. I got fit for the season and then the season got delayed and it was a long time coming. But when it finally started, I just missed out on a podium at Donington and then every round since then I have managed to put it on the podium.

The team has been faultless, the bike has been faultless and the last time I put a season like this together I was second in the British Championship on a Superbike. It’s been amazing and I have a lot of people to thank, Craig Currie behind the scenes funding a lot of it, Lee Dixon to get the bike ready over the winter and Moto Rapido who I haven’t mentioned built our bikes. We didn’t become a Ducati dealer until after the season started and Dan my mechanic has been awesome, the bike hasn’t missed a beat and of course thanks to the family, awesome as always.”

David Shoubridge (Rich Energy Ducati #86)
2021 Ducati Performance TriOptions Cup championship – 3rd
“Again, the trusty third place trophy! I finished third last year and it would have been nice to have topped it this year. It was a last-minute decision to come back to the Ducati class and everyone welcomed me back. Harris Performance welcomed me in, and Rich Energy have really helped bring it all together so a big thanks to them, Taylord Flooring and a few other people who have helped me get here. Next year we will hopefully be on the new V2. It’s a great series and makes for some really great racing. Loads of people give you support and help which is why it has been particularly good with the legends of Chris Walker and John McGuinness because they have got loads of experience and knowledge and they are more than happy to pass that on.”

John McGuinness (Blue Earth Construction #4) – Race 1, 2nd – Race 2, 3rd
“What a fantastic way to end the year and stand on the podium at Brands Hatch, there is something about Brands Hatch. It is iconic, the way the fans are, its just a brilliant track. Yesterday to get the podium was good, conditions were a bit sketchy again, but I just get my nose clean, and I didn’t want to hit any of those white lines which some of the boys did unfortunately. I hope those boys are OK.

But again, up there with Chris and the champion Josh Day. I have never really been anywhere near his pace all year but to get within a second of him, I am really proud of myself. It’s a family team, we run it from home, and it has just been so enjoyable and a big thanks to everyone. You know who you are, people that have been behind me through my bad injury. A lot of people have come forward this year to help pay for a few bills and it is very much appreciated. I will be 50 years old next year, shall I carry on? You tell me! I really want to carry on, I love going racing and the icing on the cake is a podium at the last round.”

Steve Plater – Ducati Performance TriOptions Cup Ambassador
“So that’s it, 2020 TriOptions is over, Josh Day once again, three-time champion. Some great races this year and a lot of different winners. Some of the old boys, Chris Walker putting on a great show and John McGuinness, and for 2022 some big names coming into the championship. We were very lucky with full grids, and it is looking like a pretty good entry for next year. So, looking forward to 2022 and it is going to be another strong season. Eight rounds, 16 races. All to play for.”