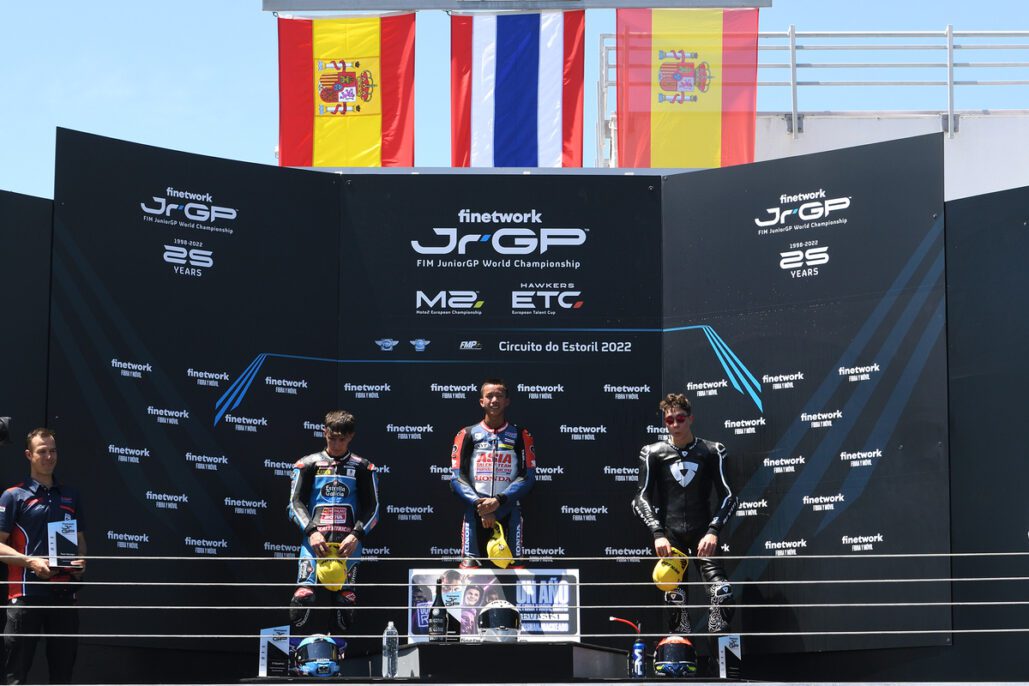 The new season has brought with it some fresh faces at the front as a thrilling opening round draws to a close.

The 2022 Finetwork FIM JuniorGP™ World Championship got off to a thrilling start, with five action-packed races, more history made and an exciting prospect ahead for the rest of 2022. The Finetwork FIM JuniorGP World Championship class welcomed a new race winner and a new country on top, as Thai star Tatchakorn Buasri (Honda Racing Thailand) stormed to a first victory of his career. It was a dominant double from Lukas Tulovic in what was an eventful day for the Moto2™ European Championship, with the German taking the first victories of his career in the class, whilst Joel Esteban (Aspar Junior Team) took two race wins in the Hawkers European Talent Cup.

JuniorGP
In the sole JuniorGP™ race, it was the usual tight racing that’s been enjoyed in past seasons. After the pack settled down, Harrison Voight (SIC 58) was one of the early race leaders, along with David Alonso (Aspar Junior Team) and pole-sitter Jose Antonio Rueda (Team Estrella Galicia 0,0). However, a crash on the exit of the chicane for Voight who highsided left Angel Piqueras (Team Estrella Galicia 0,0) nowhere to go, putting an end to both of their races. In the closing stages and having been at the front sporadically, Tatchakorn Buasri came to the fore and was second on the last lap, with Rueda crossing the line first. However, the Spaniard was denied a career-first victory as he was demoted one place for exceeding track limits on the final lap, thus giving Buasri the win. Completing the podium was David Salvador (Laglisse Academy), edging out David Alonso (Aspar Junior Team) by 0.005s. Rookies Adrian Cruces (Cuna de Campeones) and Facundo Llambias (Team Estrella Galicia 0,0), who were in the leading group, completed the top six.

Moto2
It was a busy day for the Moto2™ ECh, with both races disrupted by red flags. Race 1 first saw the red flag waved for Tommaso Marcon (MMR), after he collided with Roberto Garcia (SKX Cardoso Racing) going to Turn 1 on the first lap. On the restart, Lukas Tulovic pulled away from Senna Agius (Promoracing), before the red flag was waved again during the 12-lap restart. This time, for a crash involving Piotr Biesiekirski (Pertamina Mandalika SAG Euvic Racing Team) and Xavi Cardelus (Promoracing). Therefore, the podium saw Tulovic take a first win ahead of Agius and Alex Escrig (Yamaha Philippines Stylobike Racing Team), the latter two taking their first podiums in the class. Race 2 saw a red flag in the early stages for a crash involving Sam Wilford (AGR Team), whilst on the restart, Tulovic again dominated, ahead of Agius and Mattia Rato (MMR), who was elated with a first podium in a tight finish with Alex Toledo (Pertamina Mandalika SAG Euvic Racing Team). In the Stock class, Alex Ruiz (FAU55 Tey Racing) took honours in both races.

Hawkers European Talent Cup
In the Hawkers European Talent Cup, reigning Champion Maximo Martinez (Team Honda Laglisse) crashed out of both races with spectacular highsides; thankfully he was OK. Race 1 wasn’t short of drama as Alberto Ferrandez (Finetwork Mir Junior Team) tangled with Brian Uriarte (Team Estrella Galicia 0,0) into Turn 1 with three to go, ending their races. Out front, Joel Esteban was in a class of his own, breaking clear early on to take a first ever win by over 13 seconds ahead of teammate Dodo Boggio and Italian Guido Pini (AC Racing Team), both taking a first rostrum. Esteban again dominated in Race 2 whilst Casey O’Gorman (MLav VisionTrack Academy) crashed out of second after a fourth in the Race 1. Esteban doubled up ahead of Malaysian Hakim Danish (SIC Racing) and Finnish star Rico Salmela (Team Estrella Galicia 0,0) who both go first podiums; Salmela was promoted to the Race 2 rostrum after a late penalty for Pini, who exceeded track limits. 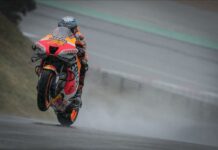