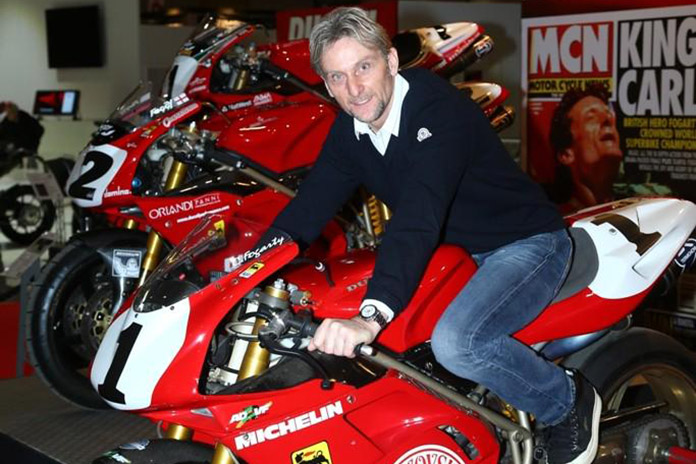 There are just two weeks remaining until the Carole Nash London Motorcycle Show returns to London’s ExCel Centre (February 13-15), opened by ‘I’m a Celebrity…Get Me Out of Here!’ winner Carl Fogarty. ‘Foggy’ will be officially opening the show on Friday, where he will be meeting his racing fans for the first time since being crowned ‘King of the Jungle’.

Fans attending on the Friday will also be able to meet one of the UK’s most promising MotoGP stars, Scott Redding, who fresh from his first test of the 2015 season, will be greeting fans and signing autographs throughout the day. He will be joined by four time British Superbike Champion Shane Byrne and Macau GP winner Stuart Easton.

In addition to this unique once-in-a-lifetime display there will be an incredible array of the new 2015 motorcycles from Aprilia, BMW, Ducati, Harley Davidson, Honda, Kawasaki, KTM, Moto Guzzi, Piaggio, Royal Enfield, Suzuki, Triumph, Victory and Yamaha. Visitors over the three days will get to see new machines such as the supercharged  Kawasaki H2, Ducati Scrambler, Suzuki GSX-S1000, and the all-new Yamaha YZF-R1.

The free live action show ‘Slide’, sponsored by Michelin, features Isle of Man TT hero John McGuinness and Superbike legends James Whitham and Chris Walker going head-to-head around a special course in the middle of the arena. Another exciting moment for motorsport fans will be the unveiling of the new BMW British Superbike team (Tyco BMW) comprising of Michael Laverty and Tommy Bridewell. Visitors will also be able to see an exclusive collection of World Championship winning machines raced by Italian MotoGP legend Valentino Rossi.

The MCN London Motorcycle Show will also be playing host to an incredible Norton tribute that will not only feature the prototype NRS588 that Steve Hislop took to a memorable TT victory, but a start-up of the stunning rotary Nortons that have to be heard to be believed. Top Gear’s James May will be showcasing his classic bike collection, which will be joined by bikes from his colleague Richard Hammond.

Advance tickets are priced just £16 (until 9th February) and £20 on the day with free bike parking (and free for children under 15) you can check out the Carole Nash MCN London motorcycle show and book tickets via www.mcnmotorcycleshow.com or call 0844 5816 900