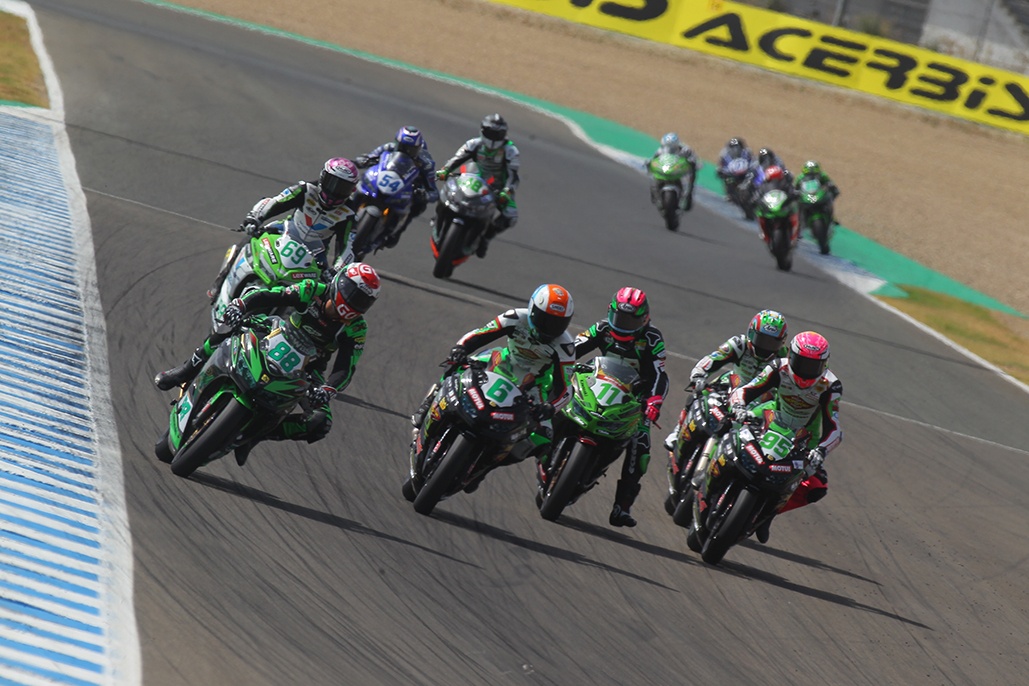 The Japanese factory secured its third consecutive title with eight victories achieved in a disrupted season.

After a very competitive season, Kawasaki won its third Manufacturers’ title in a row in the FIM Supersport 300 World Championship with 260 points, currently 76 ahead of closest competitor, Yamaha. The Japanese constructor leads the Rider’s title run with Jeffrey Buis and Scott Deroue (MTM Kawasaki MOTOPORT) in first and second. Both riders claimed victories and podium places for the factory, whilst Ana Carrasco (Kawasaki Provec WorldSSP300), Tom Booth-Amos (RT Motorsports by SKM – Kawasaki) and Yuta Okaya (MTM Kawasaki MOTOPORT) also claimed wins for Kawasaki; scoring crucial points for the chase in the Manufacturers’ Championship.

Kawasaki’s main competitor, Yamaha, dominated the first round of the 2020 season at the Circuito de Jerez – Angel Nieto with two wins – one for Unai Orradre (Biblion Motoxracing Yamaha WorldSSP300) on Saturday and Bahattin Sofuoglu (Biblion Motoxracing Yamaha WorldSSP300) on Sunday. Nevertheless, Kawasaki’s riders managed to achieved podium places with rookie Booth-Amos finishing in second place in Race 1 whilst Carrasco claimed second place in Race 2. In Portimao, Kawasaki bounced back with Carrasco’s first win of 2020 in Race 1, with Buis and Booth-Amos completing the podium in second and third place respectively for a first podium lock-out for any manufacturer in 2020. Sunday’s Race 2 also saw a Kawasaki win with Deroue’s success and first victory in 2020.

At MotorLand Aragon, Kawasaki had taken advantage of Buis’ domination over the race weekend as the Dutchman achieved his first ever double; finishing Race 1 with a 6.870s advantage – the biggest of the year. The Aragon Round was also confirmation of the strength of the Kawasaki Ninja 400 as the bike achieved two podium lockouts; Carrasco and Mika Perez (Prodina Ircos Team WorldSSP300) completing the podium in Race 1, whilst Thomas Brianti (Prodina Ircos Team WorldSSP300) and Deroue finished in second and third place in Race 2. The Teruel Round saw Yamaha fight back with a victory in Race 1 with Sofuoglu, whilst Buis and Deroue completed the podium to make it two Kawasakis on the rostrum. In Sunday’s Race 2, it was Jeffrey Buis who won with a 5.114s advantage over teammate Deroue, the Dutchman taking Kawasaki’s third victory at the track.

Kawasaki also demonstrated supreme competitiveness at the Circuit de Barcelona-Catalunya as Booth-Amos won Race 1 with six Kawasaki Ninja 400 machines in the top 6, demonstrating the bike’s capabilities in wet conditions to take his and Great Britain’s first win in the class. In Race 2, it was another Kawasaki win with the first Japanese victory in the category thanks to Yuta Okaya; his teammates Deroue and Buis completing the top three whilst the race winner was also a new winner and the first from Japan. In Magny-Cours, it was Buis who claimed the victory in Race 1, relegating his teammate Deroue to second place. Both riders hopes to fight once again for top positions in Race 2 during the Pirelli French Round.

A competitive bike coupled with a strong line-up gave Kawasaki the opportunity to win its third Manufacturers’ title in WorldSSP300. Heading into the final Round of the 2020 season, the constructor will aim to do a final demonstration of its dominance over the category and heading into 2021 as the manufacturer to beat.

Steve Gutteridge, Kawasaki Europe Race Manager:
“We as Kawasaki are so happy to claim this award overall. The programme we put together with our teams to help bring through multiple talented young riders from many different countries into the sport is obviously working and we have to thank all of their combined efforts and winning results together that awards us the Manufacturers’ title again for 2020 season!”

Ludo Van der Veken – MTM Kawasaki MOTOPORT Team Manager:
“MTM Racing Team is very happy with the cooperation with Kawasaki. Kawasaki Europe and Kawasaki BENELUX support us and this is very helpful, especially this year with COVID-19. We have the best riders at the moment, and I think we can offer Kawasaki a lot. And we are very happy for Kawasaki to win the Manufacturers’ Title”

Jordi Caparros Molino – Kawasaki Provec WorldSSP300 Team Manager:
“From the Provec WSSP300 team we are very proud of this title in this category, this year is very competitive, and we are pleased to have contributed to this constructors’ title with our Ninja 400, congratulations to all Kawasaki teams.”

Rob Vennegoor – RT Motorsports by SKM – Kawasaki Team Manager:
“As team RT Motorsports by SKM we are in our second year as official supported team through Kawasaki Europe. The relationship with Kawasaki in combination with the great Ninja 400 and strong riders give the potentially great results we also experienced this year. For that we are thankful to Kawasaki and congrats them with winning the manufacturing title in 2020.”