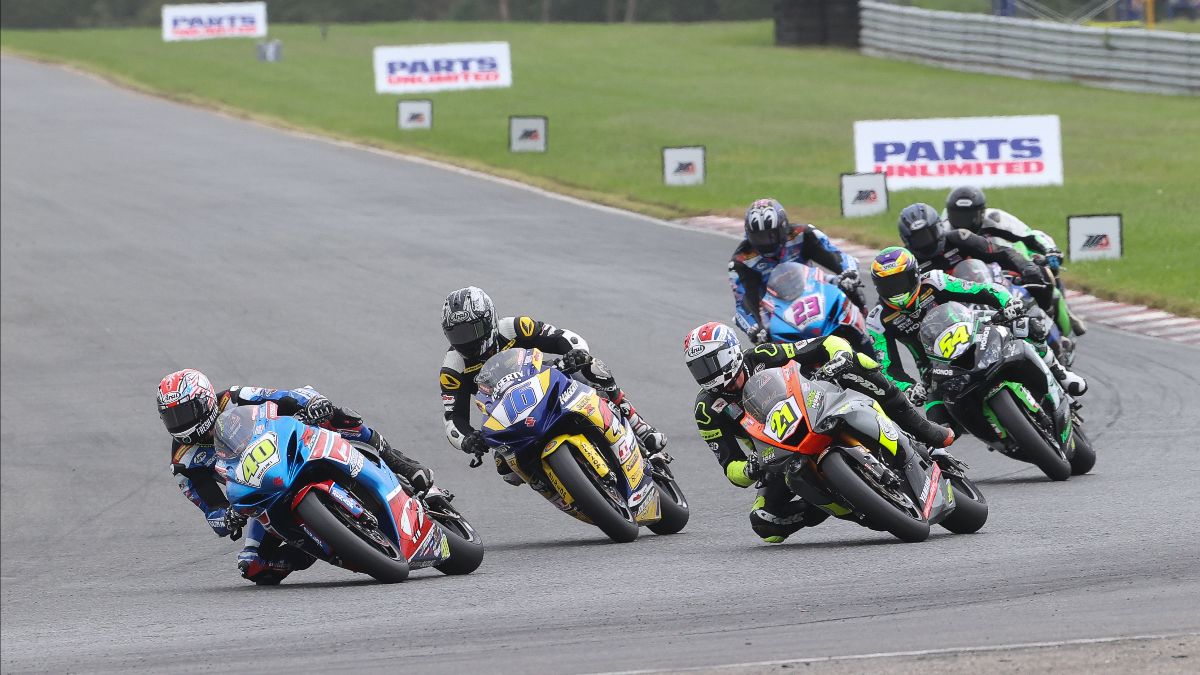 The 2020 MotoAmerica Supersport class is currently the most competitive in the series and it was never more so than in Sunday’s second race at New Jersey Motorsports Park with Sean Dylan Kelly winning a 20-lap dogfight with championship rivals Brandon Paasch and Richie Escalante.

Meanwhile, Rocco Landers leaves New Jersey and heads to next weekend’s round of the 2020 MotoAmerica Series with the biggest smile in the paddock, the youngster from Oregon having a perfect weekend in the Liqui Moly Junior Cup and Twins Cup classes with four victories in four races.

The race of the day was in MotoAmerica’s Supersport class, and the three leaders in the season championship put on an absolute show for the fans. Early in the 20-lap event, Sean Dylan Kelly, Brandon Paasch, and Richie Escalante let it be known that they were in it to win, and the trio raced closely and passed each other often. Kelly, aboard his M4 ECSTAR Suzuki made a breathtaking pass up the inside of Escalante, in a spot where it didn’t seem like a pass was possible. And then, it was Paasch’s turn. Riding his Celtic HSBK Racing Yamaha, the local rider made almost the same pass on Escalante and in the very same turn. The only difference was that the opening was even more narrow, and Paasch left tire rubber on Escalante’s leathers on the way through.

At the checkers, Kelly took the win, Paasch finished second, and Escalante race his HONOS Kawasaki across the stripe to complete the podium.

“I’m really happy we’re here in the P1 spot, especially after yesterday,” Kelly said. “We had a tough day. Some issues and couldn’t even stay with the group with these two guys. It’s tough to have days like that where you just have to settle for third, which is obviously not bad, but knowing that you can fight up in the top group, it’s something tough. But the most important thing is my team worked really hard. We came in today and clearly showed that we can bounce back. They worked really hard last night on the bike. Not only that, but we also worked on some things. I did my homework, watched the races to see where they were clearly faster than me. Showed that we came back stronger than yesterday and really happy about that. The race was really, really fun. Both Richie and Brandon were right there the whole time. We had close passes, but I think all really, really good. It was good. Like Richie said, everyone had different lines and doing different stuff. So, it was definitely pretty fun. Just really happy to get these 25 points. I know that we just need to keep on working. Every racetrack is a different story. So, we’re just going to keep on going. We still have a few weekends to go and we’re going to keep on fighting.”

By the way Rocco Landers has been dominating two different race classes this season – Liqui Moly Junior Cup and Twins Cup – you might think that Sunday’s Twins Cup race two was processional. And, if you’re talking about Landers only, you’d be right since he put in another dominant performance aboard his SportbikeTrackGear.com Roadracingworld.com Suzuki to win by nearly five seconds.

The battle for the rest of the podium was definitely the must-see part of the race with Hayden Schultz Racing Yamaha’s Hayden Schultz and Robem Engineering/Plastic Surgery Racing Suzuki’s Dominic Doyle dicing all the way to the checkered flag. At the stripe, it was Schultz over Doyle in a near-photo-finish, the pair separated by just .095 of a second. Meanwhile, 1-833-CJKNOWS Accident & Injury Law Yamaha rider Kaleb De Keyrel was even closer to Doyle, and he just missed out on a podium finish by .055 of a second.

“On the start, I thought I had a good initial launch, but I had trouble getting it from first to second, so he got by me there,” Landers said. “So, my goal was first or second into turn one and try to keep the lead at least in turn three. When I looked back, I saw, coming out of turn five I think, I saw Kaleb (De Keyrel) was there. I was like, ‘Oh, it’s going to be me and Kaleb the entire race fighting.’ And then I looked back the next lap and there was more space. So, I was like, ‘I’ll try to get a few good laps and put in some tire management.’ Then, on lap six or so, I started to see some raindrops. So, I was like, ‘Take it easy” because I had six seconds or so. I was like, ‘There’s no sense in throwing away a win trying to get some good laps.’ So, I’m happy.”

In Sunday’s Liqui Moly Junior Cup race two, Landers completed a perfect weekend by taking the checkers first in his fourth race. And the Norton Motorsports/Ninja400R/Dr. Farr/Wonder CBD Kawasaki rider did it with authority, crossing the finish line by nearly nine seconds over Joseph LiMandri Jr., the Bauce Racing/CyberSafe Solutions/JL62 Racing Kawasaki rider a very happy, first-time podium finisher in second place at his home track. Third place went to Quarterley Racing/On Track Development Kawasaki’s Ben Gloddy, who equaled his third-place finish in Saturday’s race one with his second podium in a row.

“I’m stoked,” Landers declared after his win. “It’s a great weekend. This is my new favorite track. After the first lap, I was trying to get a couple good laps. I figured it would be me and Sam (Lochoff) the whole race, and then lap two, I looked back, and he wasn’t there. I had a moment going through turn six, I believe, mid-race. I just tried to settle down in the mid-30 lap times. I’m stoked. Awesome weekend.”