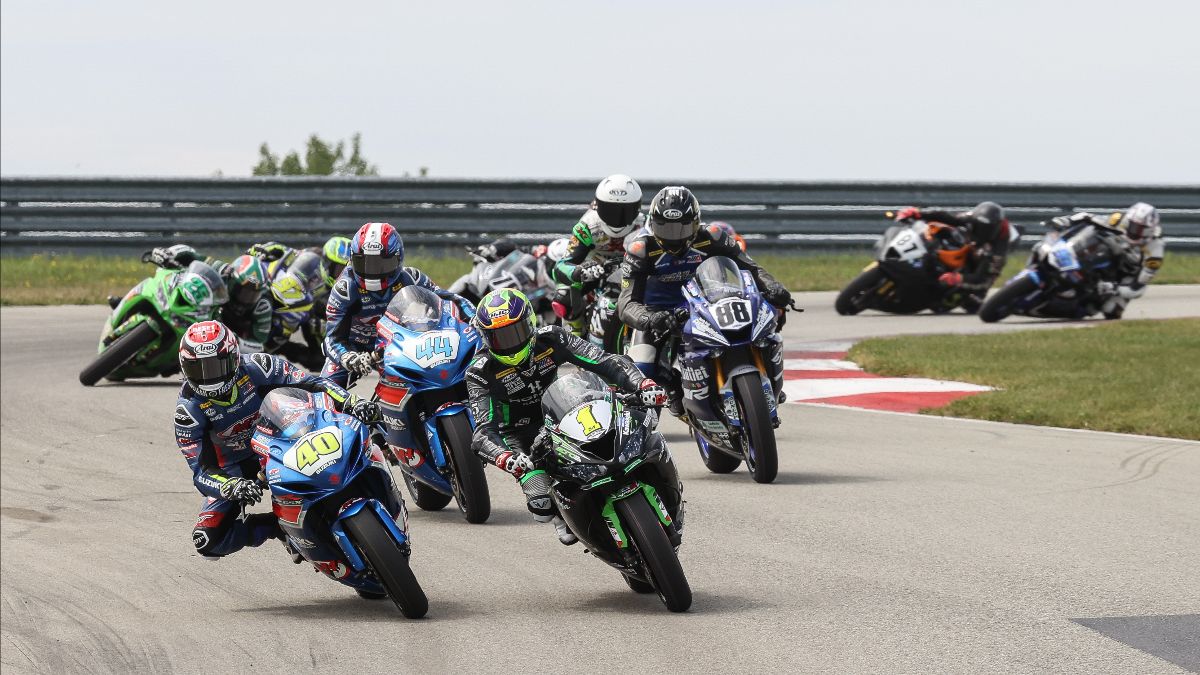 Just when it looked like momentum had swung away from championship points leaders Sean Dylan Kelly and Tyler Scott in the Supersport and SportbikeTrackGear.com Junior Cup Championships, respectively, on Saturday, it swung back right back to the duo on Sunday at Pittsburgh International Race Complex.

Kelly was beaten on Saturday by his championship rival Richie Escalante, but on Sunday it was Kelly doing the beating as he won his 10th Supersport race of the season to take firm control of the championship.

In the SportbikeTrackGear.com Junior Cup Championship, Ben Gloddy made big inroads into Scott’s lead in the title chase on Saturday, but the latter was able to stop the bleeding with a bounce-back victory on Sunday.

Meanwhile, Jake Lewis won his fourth Stock 1000 race of the season to take full advantage of an off day by Corey Alexander to stretch his points lead to 20 as the series heads to New Jersey Motorsports Park, September 10-12.

Supersport: Kelly Turns The Tables
Sunday’s Supersport race was a chance for either HONOS HVMC Racing Kawasaki rider Richie Escalante to do the double and get his second win of the weekend or for M4 ECSTAR Suzuki’s Sean Dylan Kelly to resume his winning ways after Escalante broke Kelly’s six-race winning streak on Saturday. That’s because Kelly or Escalante had won all but one of the 13 races prior to Sunday. And, as it turned out, it was Kelly who got the win, which was his 10th of the season.

As usual, it was far from easy, though, as Escalante shadowed Kelly throughout the entire race. Kelly led 12 laps of the 16-lap event, but Escalante took over the lead on lap 12 and held the position almost to the end. On the final go-around, Kelly, who had been carefully studying Escalante’s racing lines, overtook Escalante in the only place he thought he could make it stick. And he was right. Kelly took the checkered flag by just .064 of a second over Escalante.

Benjamin Smith, who was in third place for most of the race, faded back in the pack as the race approached its conclusion, and Landers Racing/Tyrant Designs/Yamaha/Yamalube’s Rocco Landers emerged as the third rider to stand on the podium.

“Something about this one felt pretty extra special,” Kelly said. “It was a really good day. Yesterday was tough. Honestly, I think I ran a really good race yesterday. I did everything I could. I think Richie (Escalante) just played it a little smarter and was having a good pace behind me and was just able to read me and study me a bit more and get me on the last couple of laps. I made a mistake, so I wasn’t able to get by him again yesterday on the last lap. Today definitely different strategies, a few different things. It played out well. I led most of the race, but I tried different rhythms there with my pace to see how Richie would react, and I saw he was with me the whole time. About five laps to go, he went by me again and at that point I said, ‘Okay, I’m going to try and do the studying this time.’ It worked out well. Richie was going really fast. He did some really consistent mid-43’s, which was really fast. I was able to push my bike to that same pace. I was able to study him. Honestly, that first flier he did, I had a little gap at first, but I was able to gather it and get right behind for the last couple laps. I knew, with two laps to go, exactly where I was going to do the pass the final lap. I’m pretty proud of that pass. Proud that I was able to defend the last few corners after that because that’s where he was able to get me yesterday in the last few corners. I was able to get it done, and honestly it just felt so good. I think I did the right work from yesterday to today. Just considering where we are in the season and where we are standing in the championship, this is really important for us. I’m just really excited to be going into New Jersey feeling like this with these races. Obviously, it’s an important win for us for many, many reasons. It just feels good to get this done.”

Landers Racing Kawasaki rider Ben Gloddy, who had won Saturday’s race while Scott Powersports/KTM rider Tyler Scott faded and finished fourth, faced a much stronger challenge from Scott in race two. In fact, after Scott overtook Gloddy on lap two, the pair swapped the lead back and forth until three laps from the end of the 10-lap race when Scott stabilized his lead despite Gloddy trying everything he could to get around him. Gloddy made one more attempt to take the lead on the final run to the checkers, but Scott ultimately took the victory by .061 of a second.

Bauce Racing/Cybersafe Solutions/JL62 Racing Kawasaki rider Joe Limandri Jr., who recorded his first podium of the 2021 Junior Cup season with a second-place finish on Saturday, finished third on Sunday to make it a double podium for him at Pitt Race.

“It was pretty disappointing yesterday because we lost a bunch of championship points,” Scott said. “We kind of fell back this weekend in the championship. We still have the lead. Yesterday I didn’t have the same aggression as I did today, and I kind of fell back right there at the end. I didn’t have enough laps to get back to the front and get crucial points that I needed. Today was a great race. The pace was definitely a lot faster, and I gave it my all. I knew I had to get to the front and try and pull away on the last lap.”

Stock 1000: Lewis Gets His Fourth
Coming into this weekend, Altus Motorsports Suzuki’s Jake Lewis had said that he was looking forward to Pitt Race because it’s one of his favorite tracks. And in Sunday’s Stock 1000 race, the current championship leader showed exactly why it’s a favorite racecourse for him. Lewis started from the pole and led every lap of the 10-lap race to notch his fourth win of the season and extend his championship lead to 20 points over Corey Alexander.

Travis Wyman Racing BMW rider Travis Wyman started second on the grid and maintained his runner-up position all the way to the checkered flag, finishing 1.442 seconds behind Lewis. The surprise of the podium was third-place finisher Hayden Gillim who replaced Jason Farrell aboard the Franklin Armory/Disrupt Racing Kawasaki. Gillim had competed in the three-round King Of The Baggers Championship, but he hasn’t competed in any of MotoAmerica’s sportbike race classes for nearly two years. Also, he had to work on Friday before driving to Pittsburgh, so he missed Stock 1000 first practice and provisional qualifying. Given all that, it was remarkable that Gillim finished third.

“It was a good race, Lewis said. “That was my plan to get out front and try to go. I felt like I had a little bit of pace on these guys all weekend to do 43’s pretty easy. This race was so tough because my pit board, I wasn’t getting a gap. I was just pushing honestly as hard as I could. I looked back once there. I was telling Travis (Wyman), I didn’t know who it was when I looked back. I was just trying like heck to break him. I was honestly a little tired. I was trying to relax my arms and stuff and focus on breathing. I was just focused on putting down those 43’s. But it feels good to win. I didn’t know where Corey was, if he crashed, or where he finished, but it’s a nice points weekend for us, especially in the Superbike cup and this class, as well. It’s a good weekend.”