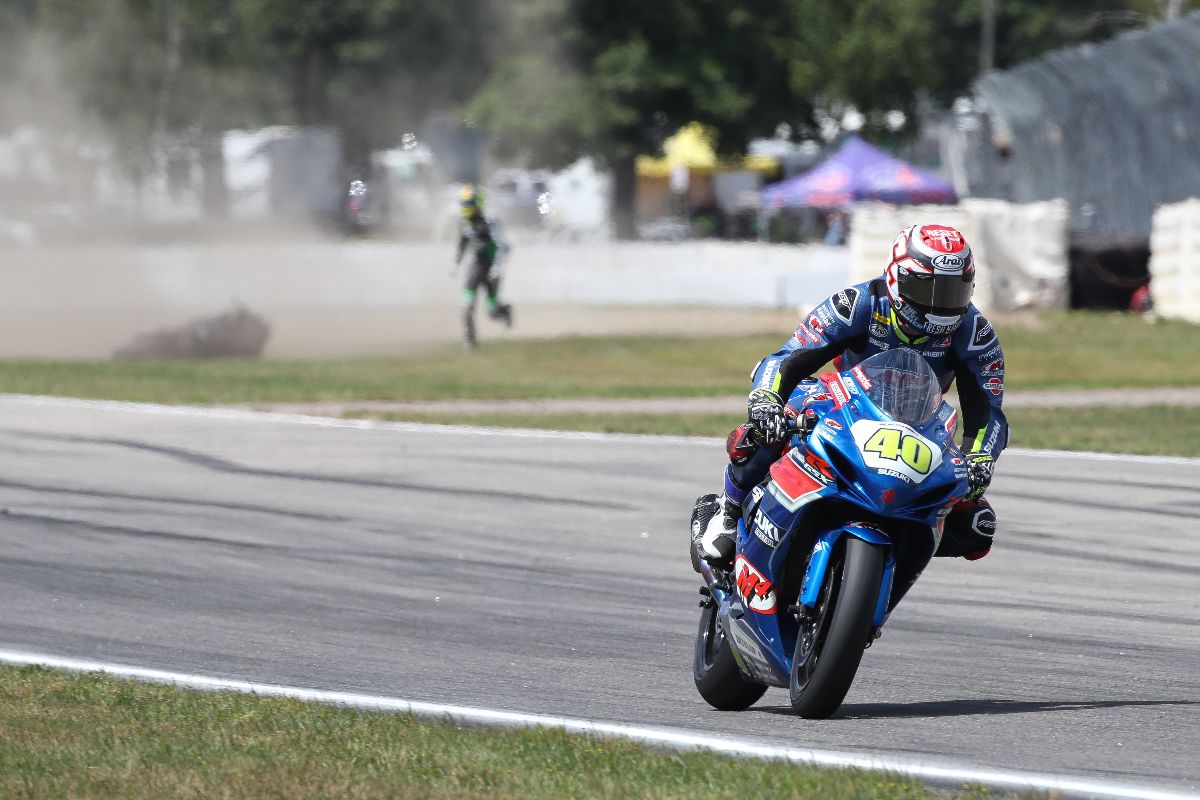 Chances are if Sean Dylan Kelly continues his march to the 2021 MotoAmerica Supersport Championship he will look back at the weekend at Brainerd International Raceway as the event where he took a massive step towards putting the title on ice.

Kelly won his second Supersport race of the weekend on Sunday at BIR. His sixth win in a row and ninth overall, combined with his rival Richie Escalante’s crash, puts him 61 points ahead with six races left on the schedule.

The other rider who made great strides in his quest for a title this weekend was Kaleb De Keyrel, the Minnesota native finishing first and second in the two Twins Cup races to build his championship lead to 58 points.

In Supersport, defending champion Richie Escalante knew coming into this weekend that he needed to put together a couple of wins to stop points leader Kelly’s winning streak and turn the tide on the 2021 championship. After winning race one, Kelly got a great start off the line in race two aboard his M4 ECSTAR Suzuki. On lap two, Landers Racing/Tyrant Designs/Yamaha/Yamalube rider Rocco Landers took the lead for the first time in the Supersport class. Meanwhile, Escalante began turning faster laps than either Landers or Kelly and put his HONOS HVMC Racing Kawasaki into the lead. From there, he stretched out his advantage and appeared to be headed for victory. Escalante’s pace may have been a little too quick, though, as he lowsided and crashed out, handing the lead to Kelly. At the checkers, Kelly took the win by more than 11 seconds over Landers. Kelly’s teammate Sam Lochoff finished third for his second podium result in as many days.

“It was a much more interesting race compared to yesterday,” Kelly said. “Yesterday was tough, just a little different. I was up front for pretty much the entire race, plus zero. Richie was right behind me, but he didn’t seem to have enough to make a pass on me. Today he was definitely a step up. The pace was way, way faster than yesterday. So, props on whatever Richie did, whatever his team did because they were on a really good level. It was a little bit hard to make solid passes. I wasn’t able to be as gnarly as I usually am with them, but it was okay. I was able to learn quite a bit just from staying behind him. Saw where he was a little bit better, where I was a little bit better. Honestly, towards the end, two laps before he crashed, I made a couple mistakes and lost the rear. I was having just a few moments. I think it got up to 1.5 seconds, almost a two-second gap. From one lap to the other, I just saw a bunch of dirt piling up out of the exit of turn 11. Definitely was a moment of that’s an extra 25 points for me. I just rode it home. I saw I had ten seconds to the gap behind me. It’s important. Honestly, this is part of racing. We never want someone to crash, but when it’s a championship rival and you know that you’ve been working hard and the past five weekends there, getting into his head, I think it forces someone into a mistake once they’re up front. We still have a long way to go. We need to keep our feet on the ground and keep on working. Really happy with how we’ve been working and just going to keep on going this way.”

The second SportbikeTrackGear.com Junior Cup race of the weekend at Brainerd International Raceway featured the usual large gaggle of riders all dicing for the lead, and there were changes aplenty as to which rider was leading at any particular moment throughout the 11-lap event. With two laps to go, and just when it looked like Scott Powersports KTM rider Tyler Scott might not make the podium let alone win the race, the Pennsylvanian emerged from the pack and took the lead which he held to the checkered flag. Scott won by only .133 of a second over Kermoto/Madden Painting Kawasaki rider Cody Wyman. Saturday’s race one winner Ben Gloddy led laps three, five, seven, and nine, but he ultimately finished third aboard his Landers Racing Kawasaki to complete the podium.

The inaugural Royal Enfield Build. Train. Race. Series kicked off on Sunday at Brainerd International Raceway with California rider CJ Lukacs taking the win. The motocross racer started from the pole in the eight-lap event and led all the way to the checkered flag. Canadian-turned-Californian Becky Goebel, who normally rides a hardtail chopper with no front brake, finished second on her properly built Continental GT 650 racebike, while Minnesotan Trisha Dahl, who lives about an hour-and-half from BIR, thrilled the local fans in attendance by rounding out the podium.

When asked if her motocross roots helped her win the race, Lukacs said, “Absolutely. Especially with nerves and sight lines and race lines and calming the nerves under race conditions.”

Twins Cup: Mazziotto Gets It Done

The final race of weekend at Brainerd was in Twins Cup, and MotoAmerica’s “tuner class” never disappoints. Polesitter Hayden Schultz had an eventful race as he started in the lead, then got shuffled back to fifth on the first lap, then took the lead again on lap two, then bounced around in second and third, but finally had to settle for fourth at the finish line.

Veloce Racing Aprilia rider Anthony Mazziotto was also part of the motorcycle racing “musical chairs,” but the New Yorker had a much better outcome than Schultz. He took the race lead on lap 10 and maintained it all the way to the checkered flag in the 12-lap event to record his first victory in the Twins Cup class. Minnesota native Kaleb De Keyrel followed up his race one win with a second-place finish aboard his Robem Engineering Aprilia in Sunday’s race two. Innovative Motorsports/Mike’s Imports Suzuki rider Teagg Hobbs followed up his third-place finish on Saturday with another third-place finish on Sunday.

“This weekend was really great,” Mazziotto said. “Today’s race was pretty much how I wanted yesterday’s race to go, but you can’t win them all. I was really happy. We found a really good bike setup to help make the tire last a lot more towards the end of the race. Once I got back out front there on the third-to-last lap, I just put my head down and went on a charge because I knew my tire was good. So, I knew I could run really low-37 lap times. It looked like I was able just to pull a little bit of a breathing gap for myself, and it made it really easy on the last lap to take it home and not have to block any corners.”