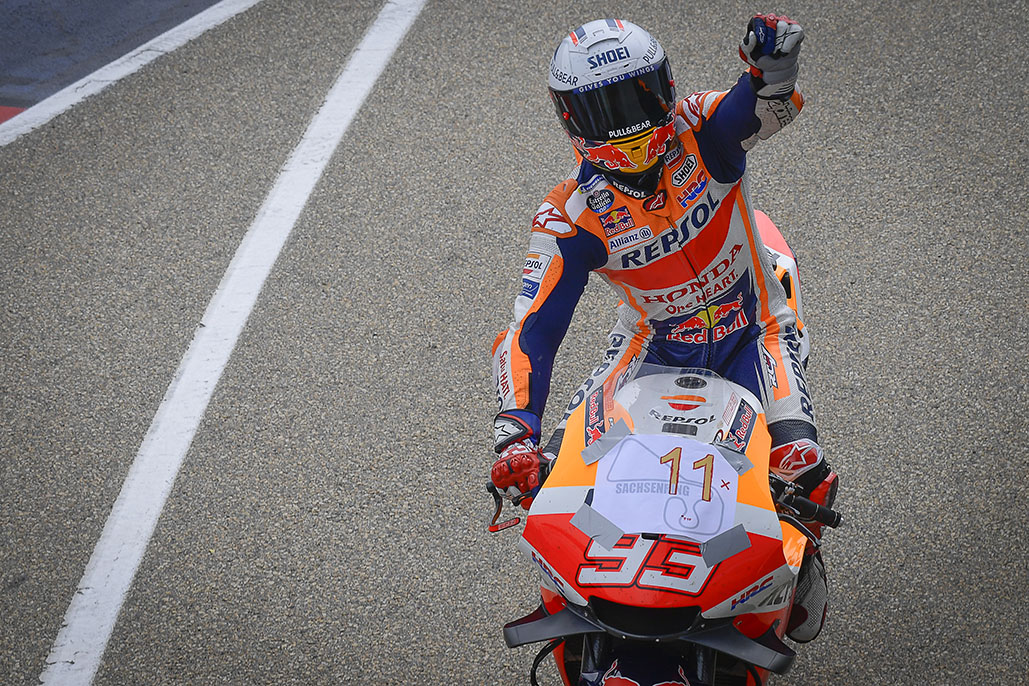 11 in a row, eight in MotoGP™, 30 laps, 25 points and 581 days: an emotional return to the top step sees the eight-time World Champion remain unbeaten in Germany.

581 days ago, Marc Marquez (Repsol Honda Team) stood atop the MotoGP™ podium in Valencia. It was a normal Sunday for the eight-time World Champion, another notch in an ever-increasing roll call of history made and victories earned. There was no Covid-19, the grandstands were full and always had been, and the number 93 was on top of the world. Three surgeries, nearly a season on the sidelines and a whole different world later, Marquez is back on top of that rostrum – and he did it in style. Taking over at the front early on and then putting the hammer down even as rain threatened, the number 93 withstood ever-increasing pressure from Miguel Oliveira (Red Bull KTM Factory Racing) to take his 11th win in a row at the Sachsenring, which is also his eighth in a row at the venue in the premier class. 30 laps leading to 25 points, prefaced by 581 days.

Oliveira pushed as much as he could but makes it three podiums in a row as he comes closer than most ever have – or will – to taking the throne from the King of the Ring, with Fabio Quartararo (Monster Energy Yamaha MotoGP) increasing his Championship lead in third place.

It was Aleix Espargaro (Aprilia Racing Team Gresini) who took the holeshot from the off though, with Marquez blasting through into second and standing Quartararo up as the number 93 made it immediately clear he’d be racing to win in Germany. Johann Zarco (Pramac Racing) then struck against Quartararo too as El Diablo initially lost out a little, with one man doing the opposite: Brad Binder (Red Bull KTM Factory Racing). The South African stormed up from P13 to seventh on Lap 1.

By the end of said Lap 1, there was another move further ahead as Marquez struck for the lead at the final corner. Past the Aprilia of Aleix Espargaro there and staying ahead into Turn 1, it was a statement of intent but the number 93 couldn’t shake him off just yet. Next time around the two went toe-to-toe again, but Marquez retained that lead… and then began to grow it as the white flag came out.

The Sachsenring is no stranger to spots of rain, and as a few began to fall the flag showed that riders could, if they so chose, come in to change bikes. Marquez’ reaction to that, as Aleix Espargaro dropped back, was to push even more – and sure enough, the bravery paid off with a nice cushion leaving him with some breathing space at the front.

Meanwhile, Jack Miller (Ducati Lenovo Team) and Oliveira had made their way past Quartararo and then Zarco before also slicing through on Aleix Espargaro. By a third of the race run, Oliveira struck against Miller too, the Portuguese rider taking over in second and inheriting the task of trying to chase down Marc Marquez at the Sachsenring. But boy, did he try.

Two seconds became 1.9 became 1.8, with the KTM rider in the groove as he tried to haul in every meter possible on a charge for the front. Chipping away a tenth here and a tenth there, it seemed to be a matter of time, surely, before the Portuguese rider caught up? The gap was steadfastly going one way: down.

With only a handful of laps to go, it looked like game on. From hovering at 1.2 to suddenly only nine tenths, Oliveira showcased more great racecraft to back up his stunner in Barcelona. But Marquez wouldn’t be fazed. It went back up over a second as the eight-time World Champion responded and then, suddenly, that seemed it was it: one more tenth, then a few more, and suddenly the Honda had a second and a half in hand once again. Now, all that was left was to bring it home.

That Marquez did, with a nod of his head to the Repsol Honda Team waiting on pit wall as he secured that incredible eighth premier class win in a row at the Sachsenring. An achievement that would have made headlines alone, if not for 581 days and career-endangering injury in between his trips to the top step of the MotoGP™ podium. Tears, cheers and some serious emotion poured out as one of the truly great comebacks saw the eight-time World Champion wrap up another premier class victory.

Oliveira, after calling time on his charge, came home in second for yet another podium – his third in a row – ahead of Quartararo as the Frenchman made up some previously lost ground to round out the rostrum. Just behind him, Brad Binder came home fourth to make it an even better day for KTM.

Fifth place went to a Ducati, but not the early scene stealers. Francesco Bagnaia (Ducati Lenovo Team) was near the end of the points on Lap 1, the Italian seemingly out of the fight for the front. But he made steady and impressive progress to eventually pip teammate Jack Miller to the final place in the top five, the Aussie forced to settled for sixth. Also seemingly somewhat forced to settle were Aleix Espargaro in P7 and, in the end, Zarco down in eighth, losing some ground to Quartararo in the standings.

Joan Mir (Team Suzuki Ecstar) likewise made an early charge into the top ten, but the reigning Champion’s challenge bottomed out before he could attack any further forward, the number 36 taking home ninth although just two tenths behind Zarco. A little further off that duel, Pol Espargaro (Repsol Honda Team) completed the top ten.

Alex Rins (Team Suzuki Ecstar), despite his injury struggles, came home in P11 and just fought off the attention of the likewise-returning Jorge Martin (Pramac Racing). The number 89 was top rookie at the Ring and took some solid points after earlier fighting further forward. Takaaki Nakagami (LCR Honda Idemutsu) was 13th ahead of Valentino Rossi (Petronas Yamaha SRT), the Doctor taking two points. Completing those points was Luca Marini (Sky VR46 Avintia) as he beat fellow rookie and teammate Enea Bastianini (Avintia Esponsorama) to P15 by a tenth.

There are a few usual frontrunners missing from that list. After a difficult qualifying, Franco Morbidelli (Petronas Yamaha SRT) and Maverick Viñales (Monster Energy Yamaha MotoGP) had their day go from bad to worse at the start as they were running last. It didn’t get better from there either, with both staying on but coming home as the final two finishers split by a few tenths. Alex Marquez (LCR Honda Castrol) and Danilo Petrucci (Tech3 KTM Factory Racing) also failed to score after they crashed out together, and Lorenzo Savadori (Aprilia Racing Team Gresini) slid out.

That’s it from the Sachsenring and a history-making Sunday. Only Marc Marquez will likely ever know how it feels, what it cost or the true work behind being able to return to the top step of a Grand Prix podium. 30 laps likely felt like a long time this afternoon, but 581 days will have seemed like a lifetime.

Join us again next weekend for another showdown as the TT Circuit Assen welcomes MotoGP™ back to the Netherlands.

Marc Marquez: “It’s one of the most important and hardest moments of my career, today I knew it was a great opportunity, the mentality wasn’t easy because I’m coming from a hard situation with three 0s in a row but I said today is the day. Before this weekend I thought I’d fight for the podium and try and be close with the top guys. The victory was a low possibility but I said if it’s perfect conditions, I’ll try. When I saw a few raindrops on Lap 4 or 5, I said ‘it’s my race’. At that point I pushed and kept the same pace as before, when the second stop started I pushed even more, and I said, ‘ok it’s time to take a risk’. I took it in those laps, then the second race started with Miguel. He pushed a lot, but it was really hard to keep concentrating, all the memories from the last year were there in my mind. But we did it, and we’ll do it again.”