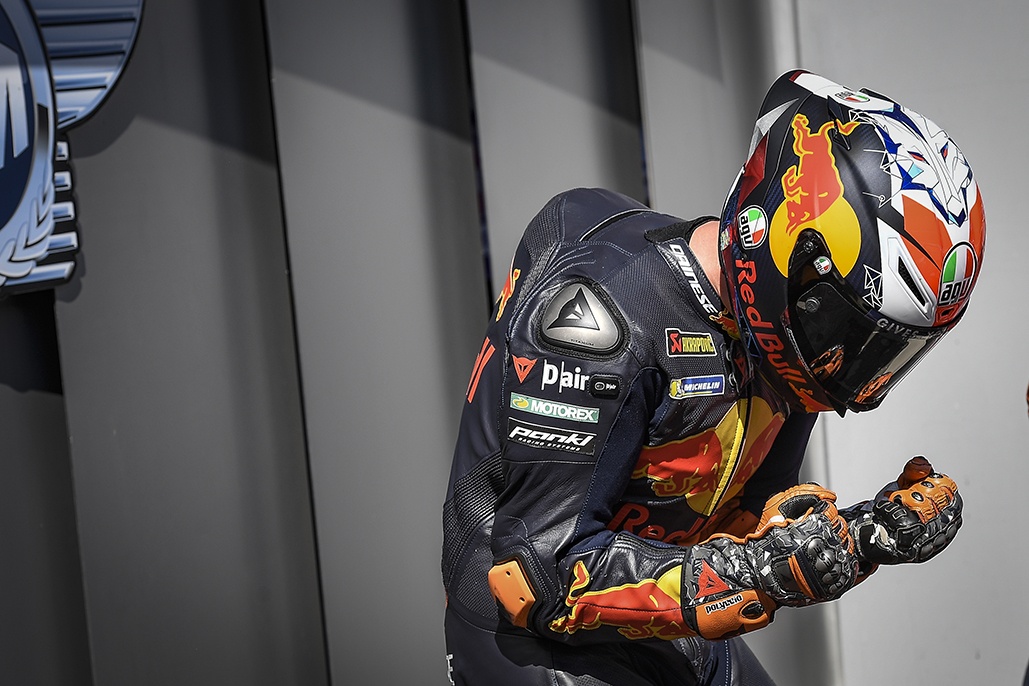 A first for the Spanish rider and the Austrian factory make it a Saturday to remember, with Nakagami taking second and Zarco going third quickest to stun the field.

Pol Espargaro and Red Bull KTM Factory Racing have both earned their first MotoGP™ pole positions in the BMW M Grand Prix of Styria. Taking the spoils in a fierce Q2 at the Red Bull Ring, the Spaniard on the Austrian machine just pipped Takaaki Nakagami (LCR Honda Idemitsu) to the top, with Q1 graduate Johann Zarco (Esponsorama Racing) defying the odds to qualify third just a couple of days after surgery on his scaphoid. However, the Frenchman will start from pitlane on Sunday.

Q1 saw Zarco pull a fast one and move through, the Frenchman impressing to pip Danilo Petrucci (Ducati Team) and deny a few others too. With his pitlane start already decided, it was a lost opportunity for those denied a place, but won fair and square with some superhuman effort – and there was more to come.

The opening laps in Q2 were tentative but once the riders got one lap under their belt, qualifying kicked off in stunning style at the Styrian GP. Fabio Quartararo (Petronas Yamaha SRT) was the first man to delve into the 1:23s with a 1:23.866, with Zarco slotting into second despite his recently operated scaphoid. Joan Mir (Team Suzuki Ecstar) then went onto the provisional front row, before Nakagami took P3.

A raging Red Bull then came flying over the line to snatch provisional pole position from Quartararo, Pol Espargaro taking over at the top by two tenths and moving the goalposts to a 1:23.645. He wouldn’t be at the top of the tree for long though – Nakagami was on a charge and the Japanese star took P1 by 0.043 as a breathless opening stint ended and the Austrian hills fell silent for a brief period, fresh Michelin rubber going in ready for five minutes of MotoGP™ mayhem at the Red Bull Ring.

Jack Miller (Pramac Racing) – who didn’t set a lap time in Q2 after encountering shoulder issues following his FP3 crash – jumped from P11 to P3 with a great lap, before Pol Espargaro then shot to the top of the times by 0.022. Alex Rins (Team Suzuki Ecstar) climbed to P4 and after two sectors, his teammate Mir was on for pole position – and so was Ducati Team’s Andrea Dovizioso. Mir couldn’t hold his advantage in Sectors 3 and 4 though as the Suzuki rider went P3, with Dovizioso slotting into P6.

Meanwhile, Quartararo had slipped from P1 to P7 with just over a minute to go, as his compatriot Zarco went flying onto the front row. Maverick Viñales (Monster Energy Yamaha MotoGP) found himself down in P10 as well, but he was up after two sectors. However, with Pol Espargaro absolutely lightning through Sector 3, Viñales lost time and had to settle for P6. Was there a further late twist in the tale? Pol Espargaro and KTM were all set for celebrating their maiden premier class pole positions, but breath was held as Nakagami was on a flyer. The Honda man was just 0.006 down after Sector 3 but he couldn’t hold on – and his lap was then cancelled for exceeding track limits anyway.


That was it. The cameras panned to the KTM box and it was celebrations galore. It’s a first pole position for the Austrian factory and being able to do it on home soil will make the feeling even sweeter. It’s also Pol Espargaro’s first MotoGP™ pole position, and his attentions will now turn to making it a victory for himself and KTM on Sunday afternoon. Nakagami will line-up in the middle of the front row knowing he has a genuine shout of victory at the Red Bull Ring, and is confident of fighting for the podium.

And what a performance from Zarco, who was third fastest. Surgery on Wednesday, fitness test on Friday, no laps completed in FP4 – third place in Q2. A pitlane start faces the double Moto2™ World Champion on Sunday, but there are definitely some important points up for grabs for the number 5. Fourth place for Mir is his best MotoGP™ qualifying and after finishing second from P6 last weekend, he will start Sunday’s battle brimming with confidence. You know things are looking good when the premier class sophomore looks disappointed with P4 despite a best Q2 performance! He’ll start from third too as Zarco’s penalty causes a shuffle.

Things didn’t look good for Austrian GP podium finisher Miller in FP4. A crash in FP3 looked to be putting his weekend in serious doubt with Team Manager Francesco Guidotti telling pitlane reporter Simon Crafar that he’s experiencing shoulder pain, but the Australian gritted his teeth to pocket a P5, just 0.120 shy of pole position. He’ll start fourth, with Austrian GP polesitter Viñales’ late lap sees the Spaniard start as the leading Yamaha rider – sixth in the session and fifth on the grid. And just 0.198 split those leading six riders in Q2.

Rins starts sixth for the inaugural Grand Prix of Styria, the Spaniard getting the better of Miguel Oliveira (Red Bull KTM Tech 3) and Dovizioso, who were P8 and P9 in the session, respectively, and also shuffle up a place. All three have shown – at least – podium pace this weekend, so it’s going to be a scintillating watch as they try to carve their way through the field. Championship leader Quartararo – despite finishing just 0.286 away from pole – suffered an equal-worst Q2 result in 10th, becoming a third row start. The 2019 Czech GP was the last time he finished this low down the grid and Quartararo starts off the front row for the first time since the 2019 British GP – almost exactly a year ago. Fellow Petronas Yamaha SRT rider Franco Morbidelli and Q1 graduate Danilo Petrucci finished P11 and P12 in Q2, with the top 12 split by just 0.594.

But there are some names missing, right?

After a crash on Saturday – rider ok – Valentino Rossi (Monster Energy Yamaha MotoGP) will start P14 for the Styrian GP as he had a tip off on his final flying lap in Q1. ‘The Doctor’ was on course to potentially grab P2 in the session but he and his YZR-M1 slid out of contention at Turn 9, giving the Italian plenty of work to do on Sunday afternoon. Iker Lecuona (Red Bull KTM Tech 3) and rookie Brno winner Brad Binder (Red Bull KTM Factory Racing) also narrowly missed out on a Q2 place, but the two KTMs will start P12 and P13 as they gain a place back as Zarco moves to pitlane…

That’s a wrap on Saturday, but Sunday is where it all counts! A whole host of riders have shown they could have what it takes to win in Styria, so now the wait begins for 14:00 (GMT+2) on Sunday. The Red Bull KTM will charge from pole for the first time, but will it be two victories from three for the newest winners on the block?

Pol Espargaro: “Unbelievable, I feel really pleased. I didn’t imagine we could get pole, I was trying to get the front or second row, which would be amazing for us. We were struggling during the weekend to make one fast lap, in the rhythm and pace we’re strong but on one lap I was missing this last tenth, making so many mistakes in fast laps like this morning in FP3. But I could do an ok lap by the end in qualifying, trying to stay off the green because it was easy to go on there! I’m super happy about it, all my guys and the whole of KTM deserve this so much. I’m happy for it and them.”