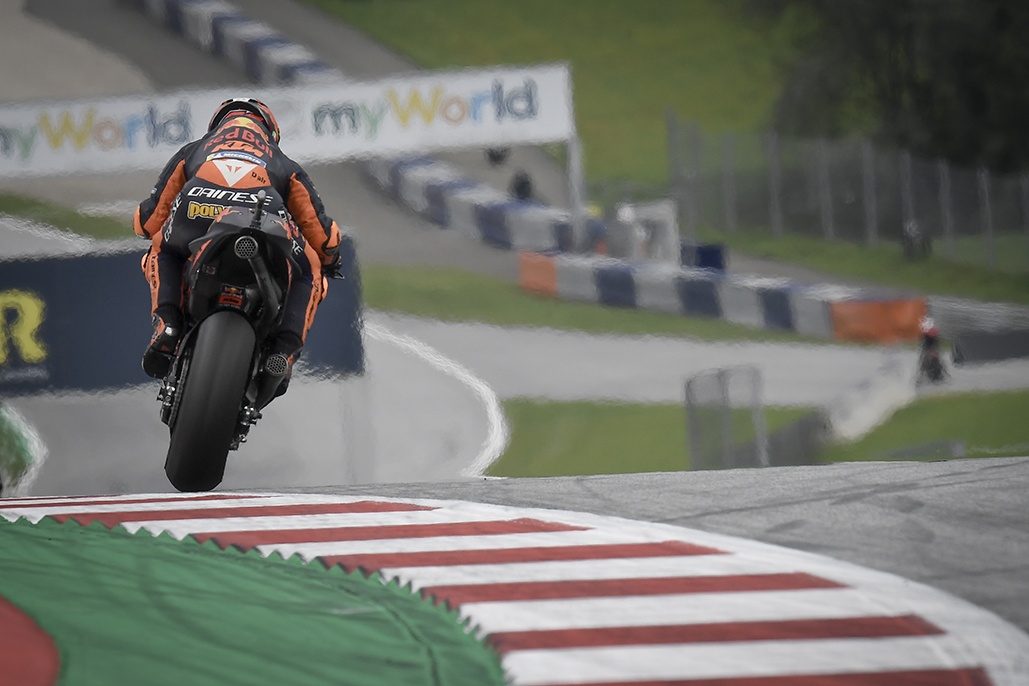 Pol Espargaro tops a Friday of two halves, ahead of a back-on-form Dovizioso and impressive Nakagami.

Pol Espargaro (Red Bull KTM Factory Racing) was the fastest man on Friday in the myWorld Motorrad Grand Prix von Österreich, the KTM rider bouncing back from the disappointment of his Czech GP to take P1 by a small but apt 0.044. Second place went to an Andrea Dovizioso (Ducati Team) on a mission as the Italian shot back up the timseheets after a difficult weekend in Brno, with Takaaki Nakagami (LCR Honda Idemitsu) completing a top three split by less than two tenths. FP1 was dry and FP2 rain affected, with the weather so far in Styria proving a key protagonist.

FP1
Pol Espargaro’s best lap was his fastest effort from the morning, with the Spaniard exchanging P1 with Dovizioso in the final five minutes but coming out on top. Nakagami also propelled himself into the top echelons in the closing exchanges, taking third in another ultra-competitive MotoGP™ session that saw five manufacturers in the top five.

Alex Rins (Team Suzuki Ecstar) continued to impress as he took fourth despite still being on the road back from a dislocated/fractured shoulder, with Franco Morbidelli (Petronas Yamaha SRT) following up his first premier class podium in Brno as the top Yamaha in FP1. Then, from Johann Zarco (Esponsorama Racing) in sixth to Fabio Quartararo (Petronas Yamaha SRT) in tenth there was only a tenth in it – with seventh, eighth and ninth taken by Miguel Oliveira (Red Bull KTM Tech 3), Jack Miller (Pramac Racing) and Joan Mir (Team Suzuki Ecstar) respectively.

Bradley Smith (Aprilia Racing Team Gresini) was the sole crasher of the session despite many pushing to set a banker lap due to the weather forecast, with the Brit going down at Turn 4. He headed to the Medical Centre for a check up and was given the all clear to continue.


FP2
After rain began during Moto3™ FP2, conditions were far from ideal by the time the premier class headed out in the afternoon and it wasn’t until the final few minutes that a flurry of riders went for it on slicks. First it was left to Miguel Oliveira and Aleix Espargaro to set laps, although Joan Mir was the true guinea pig as he headed out in the conditions first.

Once it started to dry out, the last dash rush saw most of the field try their hand at improving, but the gap to Pol Espargaro’s fastest lap in FP1 remained over two seconds. Jack Miller was the closest and he topped the afternoon session, ahead of an impressive showing from rookie Iker Lecuona (Red Bull KTM Tech 3) in second and another top performance from Oliveira as the Portuguese rider took third. Rins and Zarco were up there once again, this time in fourth and fifth respectively.

The two Red Bull KTM Tech 3 machines were out with Pol Espargaro on track at the end of the session, which made for an impressive visual armada at their home race.

No one crashed in FP2 and all in all, the weather putting paid to any improvements in the afternoon means it’s FP1 times that all count towards Q2 graduation as it stands: KTM end Friday fastest with Espargaro, ahead of Dovizioso, Nakagami, Rins, Morbidelli, Zarco, Oliveira, Miller, Mir and Quartararo – leaving a good few famous faces praying for better weather in FP3…

Maverick Viñales (Monster Energy Yamaha MotoGP) is the first looking to the skies to hold clear on Saturday as he took P11, as well as Danilo Petrucci (Ducati Team) and Valentino Rossi (Monster Energy Yamaha MotoGP), who were 12th and 13th respectively. Brno winner Brad Binder (Red Bull KTM Factory Racing) is also currently set to miss out on Q2 as the South African ended Friday in P16, but it’s his first MotoGP™ race weekend in Spielberg, so panic in the number 33’s box is unlikely – and he didn’t even head out in FP2.

That’s it from Friday, come back for more on Saturday morning as the field fight it out in FP3 at 9:55 (GMT +2). What will the skies bring? The likes of Monster Energy Yamaha, Petrucci and Brad Binder especially will be hoping the hills are alive with the warmth of sunshine.