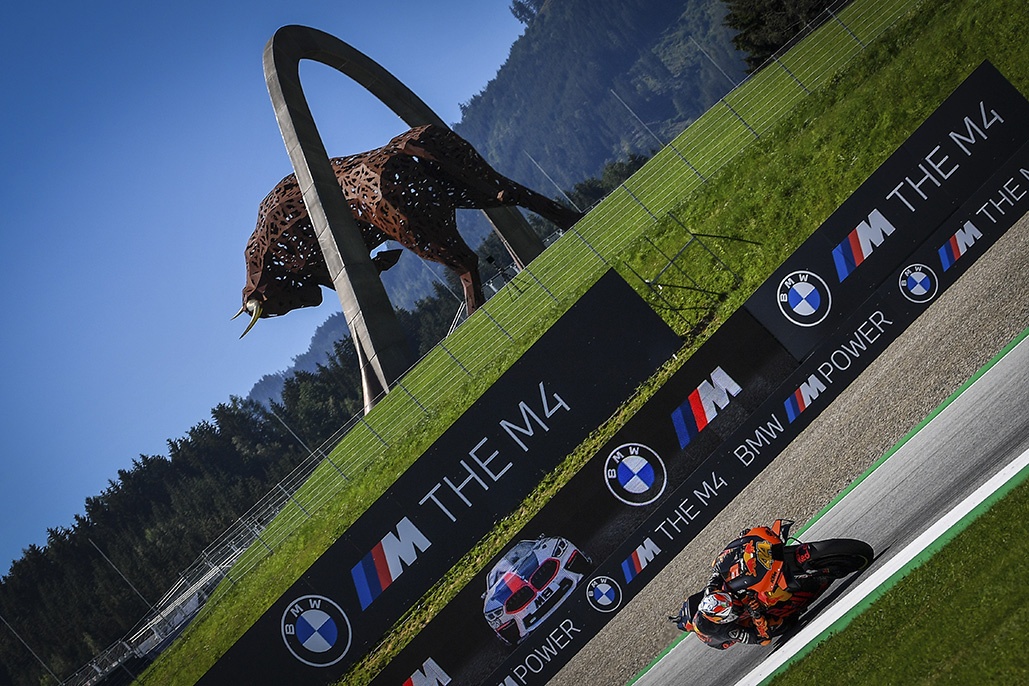 The Austrian factory split the spoils with Ducati on Friday, but it’s Pol Espargaro quickest out the blocks in Styria.

He’s done it again: seven days after topping Friday in the Austrian GP, Pol Espargaro (Red Bull KTM Factory Racing) returned to the top of the timesheets on Day 1 of the BMW M Grand Prix of Styria, giving KTM yet more to smile about in Spielberg. The Spaniard was two tenths clear at the top courtesy of his FP2 best, with Jack Miller (Pramac Racing) slotting into second from his fastest effort in the morning. Fresh from the top step of the Red Bull Ring podium, Andrea Dovizioso (Ducati Team) completed the top three – an infinitesimal 0.004 off Miller.

FP1
It was Miller who took to the top of FP1 as action began again, but the Australian retained the shadow he’d had for much of his time in the lead of the Austria GP, with Dovizioso just that aforementioned 0.004 off the Aussie’s best. The timesheets in FP1 were so tight that the top five – completed by Miguel Oliveira (Red Bull KTM Tech 3), Takaaki Nakagami (LCR Honda Idemitsu) and Joan Mir (Team Suzuki Ecstar) – were covered by just 0.102. Not, that’s not a typo.

Franco Morbidelli (Petronas Yamaha SRT) extends it to five manufacturers in the top six as he was next up on the FP1 timesheets, just a couple more tenths down, ahead of a much improved Friday for tookie Brno winner Brad Binder (Red Bull KTM Factory Racing) in P7. Fellow rookie KTM rider Iker Lecuona (Red Bull KTM Tech 3) picked up with the form he’d left off with too as he was eighth, ahead of Austrian GP polesitter Maverick Viñales (Monster Energy Yamaha MotoGP) and Championship leader Fabio Quartararo (Petronas Yamaha SRT), who completed the top ten in the morning.

With sunny skies and not much sign that will change any time soon, FP1 saw a little less of a rush than this time last week and there was only one crasher in the session, Tito Rabat (Esponsorama Racing), as the Spaniard took a tumble at Turn 4 – rider ok.

FP2
FP2 saw Pol Espargaro hit back, and by the end of play he was the only rider able to dethrone Miller and Dovizioso’s FP1 efforts, courtesy of a 1:23.638. With pace all the way through the Austrian GP weekend before the race ended in disappointment in a crash, the Spaniard remains a force to be reckoned with at the Red Bull Ring. Nakagami was the closest man to him in the afternoon but could only home in to within two and a half tenths, with Mir just 0.003 off the Japanese rider to take third.

Alex Rins (Team Suzuki Ecstar) – another looking for a comeback after a crash on Sunday – was a tenth behind his teammate despite his continued recovery from his shoulder injury, with Viñales completing FP2’s top five.

Overall, the headlines remain in KTM’s court as Pol Espargaro keeps his hold on Friday honours in Styria from that FP2 lap, with Miller and Dovizioso’s FP1 times putting them in hot pursuit, fresh from the podium. Oliveira’s FP1 best makes it two KTMs in the top four as the Portuguese sophomore – and Austrian factory – continue to impress.

Nakagami was once again top Honda as he completed the top five courtesy of his fastest effort in FP2, and the Japanese rider says they’ve improved braking stability and front end feel – sounding very positive about his prospects on Sunday. Mir and Rins, meanwhile, stack the Suzukis up in P6 and P7 as the Hamamatsu factory continue their warning shots for the field. Viñales emerges from the Friday shuffle in eighth as the fastest Yamaha, but not by much as Morbidelli ended the day just half a tenth in arrears.

The final man set to move through as it stands is Binder, who was P10 overall. Last Friday the rookie said he’d struggled to manage even one decent lap, but what a difference a week – and a fourth place in the Austria GP – make. Lecuona was just 0.050 off the South African too as he took 11th, missing out but keeping that strong form after a tougher start to his MotoGP™ career.

Valentino Rossi (Monster Energy Yamaha MotoGP), despite fifth in the Austrian GP, ended the second Friday in Styria in P13 and will want to move forward and grab a place in Q2 – and Championship leader Fabio Quartararo (Petronas Yamaha SRT) most definitely will as he ended the day just behind the ‘Doctor’. Last weekend it was braking that caused some drama for the Frenchman, this week he says it’s more the drop in pace that’s bothering him… but the weekend remains young and Quartararo has finished two Fridays outside the top ten and two within it so far in 2020.

FP3 starts at 9:55 (GMT +2) as the likes of Rossi, Quartararo and Danilo Petrucci (Ducati Team) saddle up to try and move through. But with the weather forecast looking positive, there wasn’t the same mad Friday dash this weekend – so plenty can change ahead of qualifying. Saturday morning is also expected to welcome Johann Zarco (Esponsorama Racing) back on track as he was passed fit to ride from FP3 on after his recent scaphoid surgery. Stat attack: the Frenchman has never ridden with an injury before, and isn’t sure what to expect…