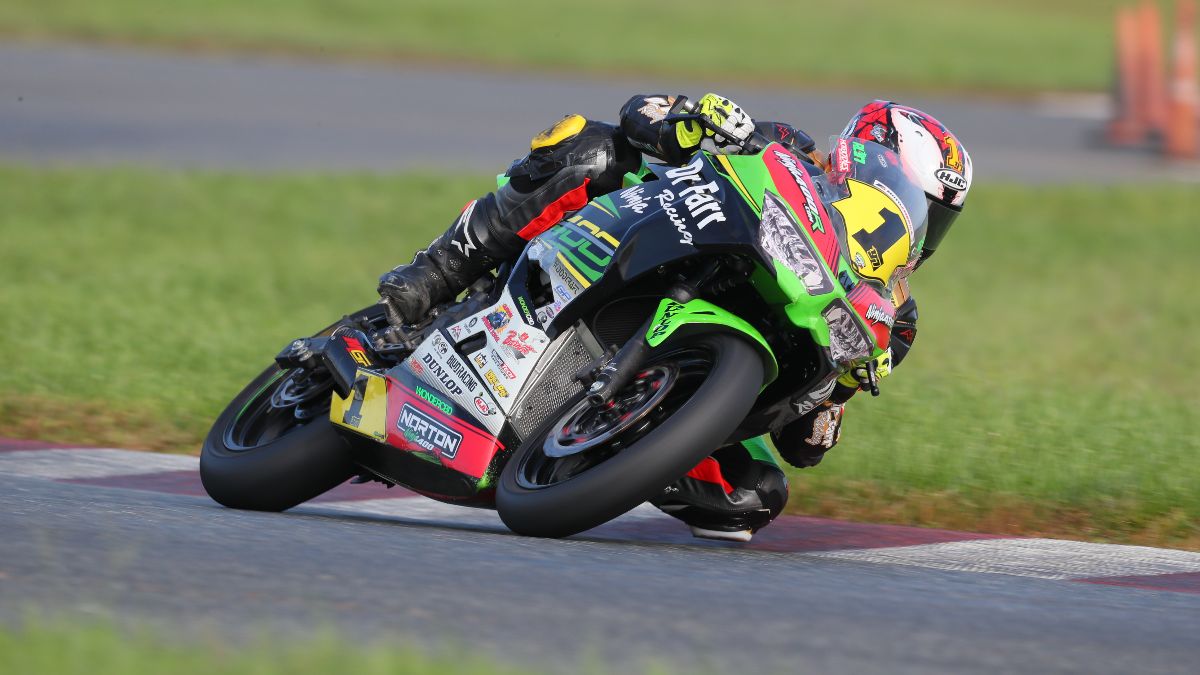 The Liqui Moly Junior Cup Title On The Table For Rocco Landers.

here’s a very good possibility that 15-year-old Rocco Landers will wrap up his second consecutive MotoAmerica Liqui Moly Junior Cup Series title this weekend at Barber Motorsports Park, September 18-20, which would make him the first champion of the 2020 season.

With his nine victories in a row, Landers holds a commanding 90-point lead over Celtic HSBK Racing’s Samuel Lochoff and a 91-point lead over Bartcon Racing’s Dominic Doyle. With 100 points available in the final two rounds after Barber at Indianapolis Motor Speedway and WeatherTech Raceway Laguna Seca, Landers would be crowned champion if his lead is 100 points or more. Two wins for Landers combined with two second-place finishes for either Lochoff or Doyle would give him a 100-point lead on Lochoff and a 101-point lead on Doyle. The most those two could hope for would be a tie, but the tiebreaker would go to Landers in any situation based on his amount of race wins.

The Liqui Moly Junior Cup isn’t the only class in which Landers is leading. With four wins in a row and five wins total thus far in 2020, Landers is also now the championship leader in the MotoAmerica Twins Cup Championship on his SportbikeTrackGear.com Roadracinworld.com Suzuki. Landers leads that title chase by 19 points over Kaleb De Keyrel with that battle likely going to the final round at WeatherTech Raceway Laguna Seca.

De Keyrel is coming off his worst weekend of the year at NJMP with sixth- and fourth-place finishes on his 1-833-CJKNOWS Accident & Injury Law-backed Yamaha. Third in the Twins Cup title chase heading to Barber this weekend is Hayden Schultz Racing’s Hayden Schultz with the Fayetteville, Arkansas, resident coming off two podium finishes at NJMP. Schultz, however, is 79 points behind Landers as this is most definitely a two-horse race.

The Supersport class is still the most riveting in the 2020 series with hotly contested battles between HONOS Kawasaki’s Richie Escalante, M4 ECSTAR Suzuki’s Sean Dylan Kelly and Celtic HSBK Racing’s Brandon Paasch a given at each and every race. Their battle at NJMP last weekend was one for the ages with the three of them going back and forth every lap until Kelly emerged with the win over Paasch, who executed a last-lap pass on Escalante.

Escalante, though, is still the series points leader and that lead is 30 points over Kelly and 89 over Paasch. Kelly’s win at NJMP was his third of the series with Escalante recording nine wins thus far. It’s almost guaranteed that those three will go at it again at Barber Motorsports Park this weekend in another no-holds-barred battle.

There is also a tight battle for the Stock 1000 Championship on-going, though Altus Motorsports’ Cameron Petersen seems hellbent on that not being the case. With four wins in a row and five total, the South African is on a tear that has put him 17 points clear of Ride HVMC Racing’s Corey Alexander with the New Yorker sitting on two wins on the year. Those two and the injured PJ Jacobsen are the only three riders to taste victory this season in the class.

Andrew Lee, who is making his 2020 debut in the Superbike class at Barber this weekend, won both Stock 1000 races last year at Barber Motorsports Park. Lee topped Michael Gilbert in both races last year with Stefano Mesa finishing third in both.

Last year’s Supersport races were drama filled with Bobby Fong winning both and taking the Superport title in the process with Barber being the series finale in 2019. Fong beat Bryce Prince and Richie Escalante in race one and Escalante and PJ Jacobsen in race two.

The lone Twins Cup race a year ago at Barber was won by Chris Parrish over Michael Barnes and Alex Dumas.

Rocco Landers won both of the Liqui Moly Junior Cup races last year, beating Dominic Doyle in both – by .277 of a second in race one and by 3.16 seconds in race two.