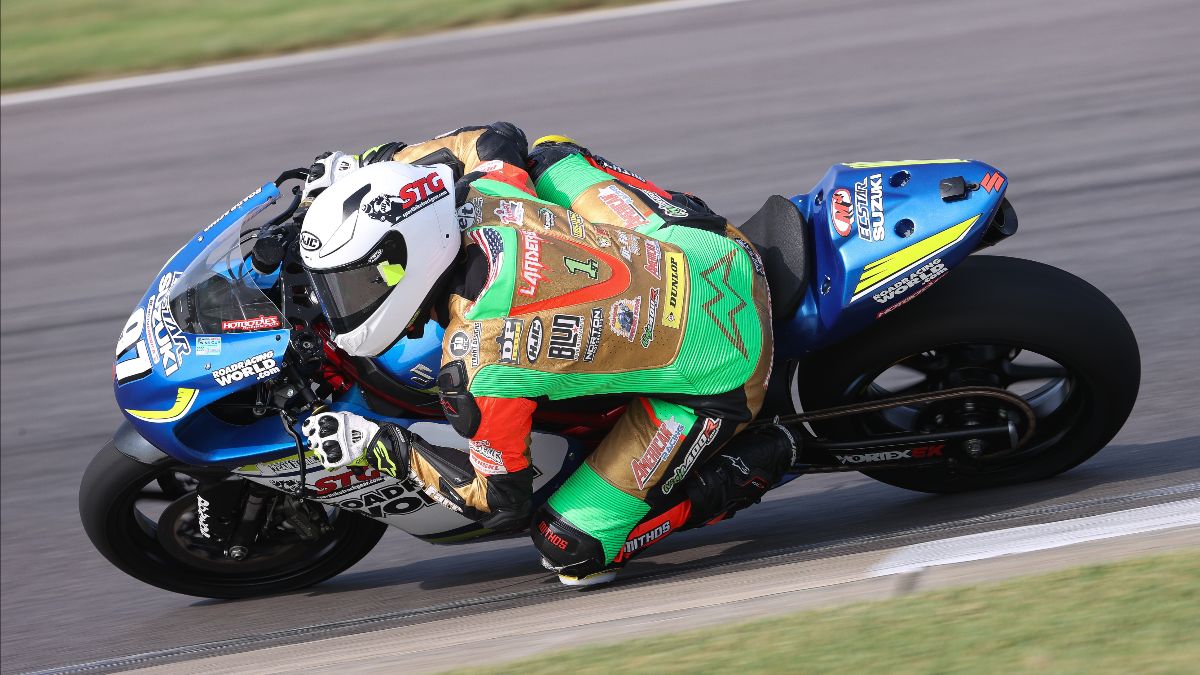 MotoAmerica Heads To The Brickyard With Titles On The Line.

With a 49-point lead and just two races remaining in the 2020 MotoAmerica Twins Cup Championship, Rocco Landers basically just needs to throw his leg over his SportbikeTrackGear.com Roadracingworld.com Suzuki this weekend at Indianapolis Motor Speedway to capture his third MotoAmerica Championship in two years.

Gaining a single point is all Landers needs to put an exclamation point on a season that has already seen him wrap up his second successive Liqui Moly Junior Cup Championship. The 15-year-old from Oregon earned the Junior Cup title at Barber Motorsports Park to successfully defend the championship he earned in 2019. The next one to check off the list is the Twins Cup Championship, a title he’s set to earn in his rookie season in the class this weekend.

Second in the title chase is held by Kaleb De Keyrel on the 1833CJKNOWS Yamaha FZ-07/MT-07, the three-time race winner well clear of third-placed Hayden Schultz and his Hayden Schultz Racing Yamaha. Schultz, in turn, is 24 and 32 points clear of Robem Engineering teammates Toby Khamsouk and Jackson Blackmon, respectively.

With 100 points still up for grabs, the Supersport Championship is far from over with two races set for The Brickyard this weekend and two more for Laguna Seca two weeks later. HONOS Kawasaki’s Richie Escalante leads the only other rider with a chance of stopping him, Sean Dylan Kelly, by 40 points.

Escalante arrives in Indy with 11 wins in 14 attempts thus far in 2020 while M4 ECSTAR Suzuki’s Kelly is the only other winner in the class with wins in the three races Escalante failed to win. Celtic HSBK’s Brandon Paasch is third in the title chase, 110 points behind Escalante and 40 clear of Aguilar Racing’s Jason Aguilar. Kelly’s teammate rounds out the top five in the series, 24 points behind Aguilar.

The closest title chase is in the Stock 1000 Championship where Altus Motorsports’ Cameron Petersen leads Ride HVMC Racing’s Corey Alexander by 31 points with 50 points up for grabs in the final two races. Petersen, however, has looked unbeatable of late and comes to the World Center of Racing with a six-race win streak. In all, Petersen has won seven of the 10 races. Alexander, meanwhile, has won two races with Celtic HSBK Racing’s PJ Jacobsen the only other race winner in the class in 2020.

As mentioned earlier, the Liqui Moly Junior Cup Championship was wrapped up in Alabama by Landers, the youngster winning his 11th race in 14 starts to take the title in style.

While the championship has been clinched, the battle for second in the Liqui Moly Junior Cup Series rages on with Celtic HSBK’s Sam Lochoff leading BARTCON Racing’s Dominic Doyle by just nine points. Quarterley Racing/On Track Development’s Benjamin Gloddy is fourth and clear of Grant Motors Racing’s Liam Grant and DMK Racing’s David Kohlstaedt, who are tied for fifth.

Everyone wants to race at The Brickyard: In total, 37 riders have entered the Twins Cup race at the Indianapolis Motor Speedway; the Supersport class will feature 30 entries; 22 Liqui Moly Junior Cup riders have entered; and there will be 27 Stock 1000 riders attempting to qualify this weekend at Indy.

Rocco Landers has won 25 Liqui Moly Junior Cup races thus far in his career and two more wins at Indy would give him 27. The 15-year-old Landers won’t compete in the series finale at WeatherTech Raceway Laguna Seca as he will be in Europe contesting the Red Bull Rookies Cup round. Landers’ 25 wins have come over the course of two championship-winning seasons from the Oregonian. Despite his success in 2020, however, he won’t match his win total in the Junior Cup class from the 14 races he won in 2019.

In addition to leading the all-time Liqui Moly Junior Cup win list, Landers is now also the winningest rider in the three-year history of the Twins Cup Series with his seven wins thus far in 2020. Alex Dumas, who now competes in the Stock 1000 Series, is second on the list with the five wins from his title-winning 2019 campaign.

Andrew Lee, who will race in the HONOS Superbike class this weekend at Indy, is the all-time leader in Stock 1000 victories with 11 wins. Cameron Petersen is second on the list with his seven wins from this season and he has the ability to get that total to nine with two races left in the 2020 Stock 1000 season.

The MotoAmerica Heritage Cup at The Brickyard event has drawn 23 entries with seven manufacturers represented. The motorcycles that will be raced in the Open Exhibition class at Indy range from a 1966 Ducati GP350 to a 2008 Buell XB12R Firebolt and everything in between.