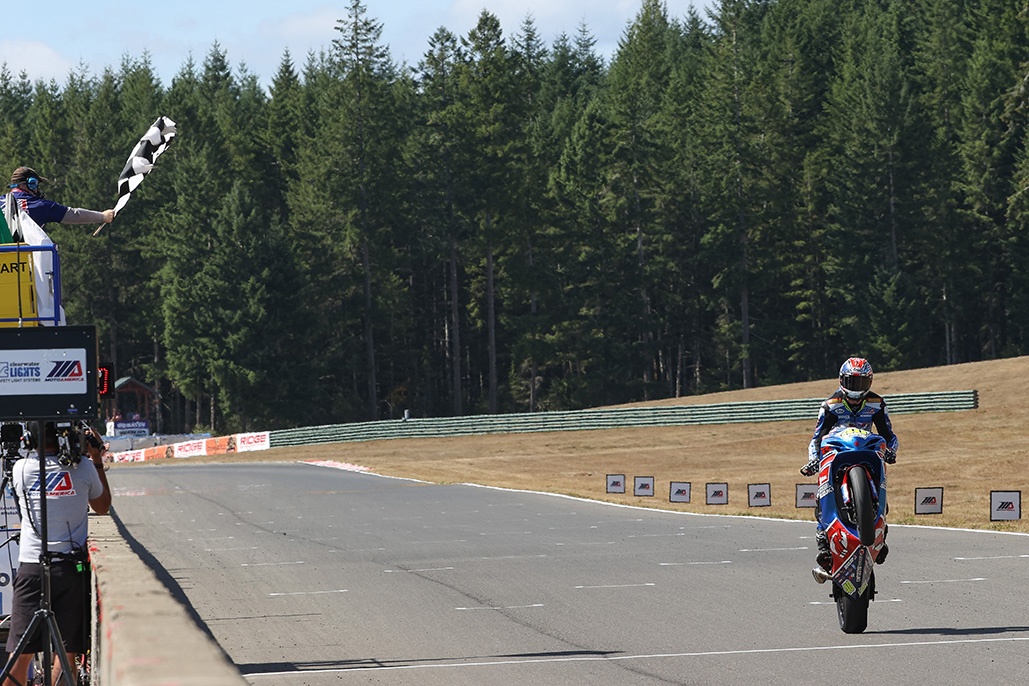 Rocco Landers ended up having the perfect weekend at the Ridge Motorsports Park, the 15-year-old Oregonian winning both Liqui Moly Junior Cup races and the lone Twins Cup race over the two days of the inaugural Komatsu Superbikes At The Ridge event.

Things didn’t go so well for runaway Supersport points leader Richie Escalante as the HONOS Kawasaki rider was taken out in the first corner on Sunday after winning on Saturday. That left his championship rival Sean Dylan Kelly to cruise to an easy victory on the M4 ECSTAR Suzuki, his second of the season.

In Stock 1000, Cameron Petersen was dominant, taking victory by over 10 seconds.

After the close racing that occurred in Saturday’s Supersport race one, the expectation was that there would be a repeat performance in Sunday’s race two. However, an incident going into the chicane on the opening lap took out Saturday’s winner Richie Escalante. The HONOS Kawasaki rider and current championship leader was unhurt but unable to rejoin the race. That left the battle for the lead to the other two frontrunners, Sean Dylan Kelly and Brandon Paasch. Then, inexplicably, Paasch appeared to fall off his Celtic HSBK Racing Yamaha, which ended his day.

With both of his fiercest rivals out of the race, that left Kelly with a gaping lead aboard his M4 ECSTAR Suzuki. At the checkers, he won by more than 18 seconds over his teammate Lucas Silva, who celebrated his first-ever podium finish. Third place went to a somewhat somber Aguilar Racing Yamaha rider Jason Aguilar, who appreciated the podium finish but wished that attrition hadn’t played a factor in his result.

“Definitely a crazy race,” Kelly said. “I’m glad I was first into the first corner to avoid everything that happened behind me. I honestly had no idea what was going on. I did hear something in the first corner. It didn’t sound too good, but of course at the end of the day we all hear things while we’re riding. So, I wasn’t too sure what was going on. Today, I really focused on myself. I feel like, yesterday, I was a bit too worried about the fight with everyone, and it obviously didn’t go my way. I mean, okay, P2. Good yesterday, but we’re here to win. Today I just went out with a different mentality and went out there to win, and it showed in the lap times. I just focused on myself. I did very consistent 44’s in the first five laps. I knew I had someone behind me. I wasn’t sure if it was Branden (Paasch) or Richie (Escalante), or even both of them. I really didn’t know. I just kept my head down and did my own thing. Five laps or six laps in, from one moment to the other I didn’t hear a bike. Then on my board I saw plus-12. That’s not very usual. I wasn’t expecting that at all. I kept on doing my laps and then looked back just to make sure if that was right, I didn’t see anyone very close. It felt eternal. But I’m very happy to get these 25 points. Of course, unfortunate that our main rivals went down. It’s racing. At the end of the day, we don’t want anyone going down. I would have liked to do a last-lap battle like my first victory in Atlanta. At the end of the day, my objective is to win the championship, so this is really good for us to get 25 (points) on our main rival. Just super grateful to be here in the first spot. Thank you to my whole M4 ECSTAR Suzuki team.”

In Sunday’s lone Stock 1000 race of the weekend, Cam Petersen proved that he is now in a happy place with his Altus Motorsports Tucker Hagerty Suzuki. The South African rider notched his third win in a row and fourth victory of the season with a dominant performance that gave him a gap of more than 10 seconds over second-place finisher Michael Gilbert aboard his Michael Gilbert Racing Kawasaki. Ride HVMC Racing’s Corey Alexander rode his Kawasaki to a third-place result.

The race was red-flagged due to an incident on the opening lap when Hunter Dunham took a nasty tumble, but thankfully, he did not sustain any serious injuries.

Commenting on the statement he made with his strong win, Petersen said, “I know it’s not going to be like this every single round. This has been one of those weekends, like these guys said, they came into Thursday and it’s been one of those weekends for them, and it’s been the opposite for me. We’ve had absolutely no problems. We’ve sorted out all the issues and gremlins we’ve had on the motorcycle. This weekend, we spent all of our time on the chassis, and that’s all we’ve done. We’ve made the bike feel like my bike. I felt really comfortable out there all weekend. It’s kind of nice. This track reminds me of some of the tracks we have back home in South Africa. So, I think that’s why I felt a little bit more comfortable on it. Hats off to the whole team. They’ve done a killer job at making sure that they give me the best. This weekend I feel like we’ve taken some pretty big steps forward in the motorcycle. I’m not taking anything away from these guys, but my goal is to be on a Superbike. I want a Superbike ride really bad. I want to be challenging for podiums and wins in the Superbike class. It’s time to start maybe opening some eyes.”

Sunday’s Liqui Moly Junior Cup race was another show of strength by defending class champion and current points leader Rocco Landers, who rode a flawless and fast race aboard his Norton Motorsports/Ninja400R/Dr. Farr/Wonder CBD Kawasaki to win by a margin of more than seven seconds over BARTCON Racing Kawasaki rider Dominic Doyle.

Speaking of Doyle, he played a part in the most exciting battle of the race as he and Celtic HSBK Racing Kawasaki’s Sam Lochoff diced for second place, with Doyle barely squeaking by Lochoff at the stripe after passing him in the final corner.

The victory was Landers’ seventh of the season so far and the 21st Junior Cup class victory of his career.

“Yesterday’s start wasn’t very good, so I was trying to get up ahead of Sam as early as possible. So, I did that in turn three or turn one or whatever. After that pass, I just tried to put my head down and get as good of a first lap as possible. I think that, if I didn’t get the first lap that I did, I would have been stuck with them because my race pace wasn’t very good. I was riding kind of tight. I felt kind of weird on the bike. But that first lap really helped me out to get up ahead of them. So, I’m stoked with this win.”