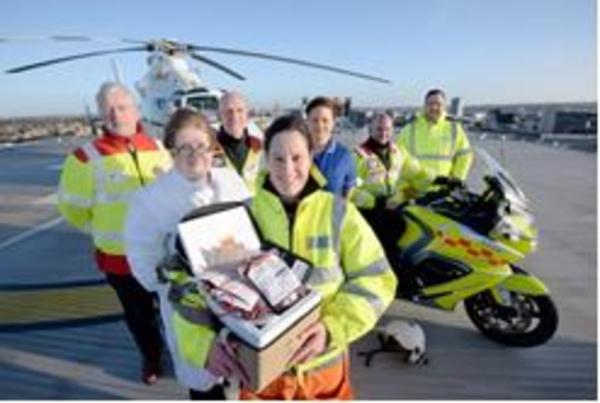 Motorsport legend John Surtees OBE, founder of the Henry Surtees Foundation is delighted to assist with funding for the Great North Air Ambulance Service to enable them to deliver and carry out blood transfusions at the scene of life threatening accidents.

Thanks to the magnificent fundraising efforts of the Henry Surtees Foundation and its supporters, the charity is now able to support the work of the Great North Air Ambulance Service (GNAAS) and the local Blood Bike groups.

As of this week, the Air Ambulance service now has the capacity to deliver fresh blood supplies to the scene of life threatening accidents, and carry out roadside blood transfusions; GNAAS is one of only a few air ambulances in the world to perform this life-saving procedure.

GNAAS doctor Rachel Hawes, has witnessed the technique being used by military helicopter crews while working in the Territorial Army in Afghanistan, she recognised its potential in the NHS. She said: “One of the first things medics have to do is stop any bleeding to save a patient’s life and many seriously injured patients risk bleeding to death. This project will bring life-saving treatment to the patient’s point of injury. That could be on the roadside, on a hill top, or in a remote community, in cases where previously the patient has had to wait until they get to hospital. This will transform pre-hospital care and save multiple lives. It is going to be of huge benefit to the region.”

The new service is the result of a collaboration between GNAAS, Royal Victoria Infirmary in Newcastle, two Blood Bike groups (Northumbria and Cumbria) and the support of the funding of equipment and vehicles by the Henry Surtees Foundation. The Henry Surtees Foundation provided funding for vital equipment such as the thermostatically controlled boxes and blood warmers, plus a three year lease with Vauxhall to supply a Vauxhall Mokka 1.7CDTi 4×4 SUVs for each of the Cumbria and Northumbria Blood Bike groups to enable them to transport the blood when bikes can’t be used. The vehicles will be handed over at the end of the month.

John Surtees OBE, said “With a background in motorsport, I have spent my life largely chasing time round the race tracks of the world. I know that every second counts and none more so than for the Air Ambulance Services when accidents or illnesses occur. Last year the foundation supported the Kent, Surrey and Sussex Air Ambulance Trust, with a similar initiative. We supplied funding for equipment and vehicles to enable them to provide blood transfusions at the scene of an accident. This has had an immediate result in the saving of injury and life. During the first year alone, over 70 transfusions were successfully carried out”

He continued “I was anxious to try and help other regions provide the same sort of additional service. We have now concluded an agreement with The Great North Air Ambulance Service in providing them with funding to purchase equipment. In addition, we are providing the Cumbria Blood Bikes and Northumbria Blood Bikes with two 4-wheel drive Vauxhall Mokka vehicles so as to give them all-weather transport for the ferrying of blood between hospital and aircraft, and return. The Great North Air Ambulance Service provides an exceptional service, but if we can help them reduce risk even further then we have done a good thing!”.

Peter Robertson, Chairman of Northumbria Blood Bikes said “The Blood Bikes are a vital tool in this operation, transporting the units of blood from the hospital to the Air Ambulances; we will also return any unused blood is to the hospitals to be used there. We are delighted that John Surtees has chosen to support us with the provision of these vehicles”.

Between 1956 and 1960 Surtees won seven World Championships and six Isle of Man TT’s on 350cc and 500cc MV Angusta Motorcycles. Moving from bikes to Formula One cars, he drove for Lotus, BRM, Cooper, Honda and Ferrari. After winning the Nürburgring and Monza 1000km races in Enzo’s sports cars is a feat unmatched by any other racer.

Moving on again, he won the 1966 Can-Am Championship in the Lola T70 MkII – a car he helped develop. Between 1969 and 1978 he ran his own team – Team Surtees – designing and campaigning cars for Formula 5000, Formula Two and Formula One.

Last year, he celebrated the 50th anniversary of his Formula One World Championship with Ferrari, and also his 80th Birthday, but even those two milestones don’t really do justice to his achievements.

The Air Ambulance Service in the North costs a great 4 million annually to keep their 3 helicopters airborne. Founded in 1991, the charity based service covers the vast areas of Cumbria, North-East England and North Yorkshire. GNAAS operates three helicopters, 365 days a year, across the North-East, North Yorkshire and Cumbria, responding to about 1,000 call-outs each year. The aircraft are crewed by specialist trauma doctors and paramedics. For more information visit: www.greatnorthairambulance.co.uk

Northumbria Blood Bikes and Cumbria Blood Bikes charitable organisations, established and run by local volunteers. They are essential in delivering urgent blood and media supplies, between hospitals, sites and labs in North East England. Between them they cover Northumberland, Tyne and Wear and County Durham and Cumbria. For more information visit: www.northumbriabloodbikes.org.uk and www.bbcumbria.org