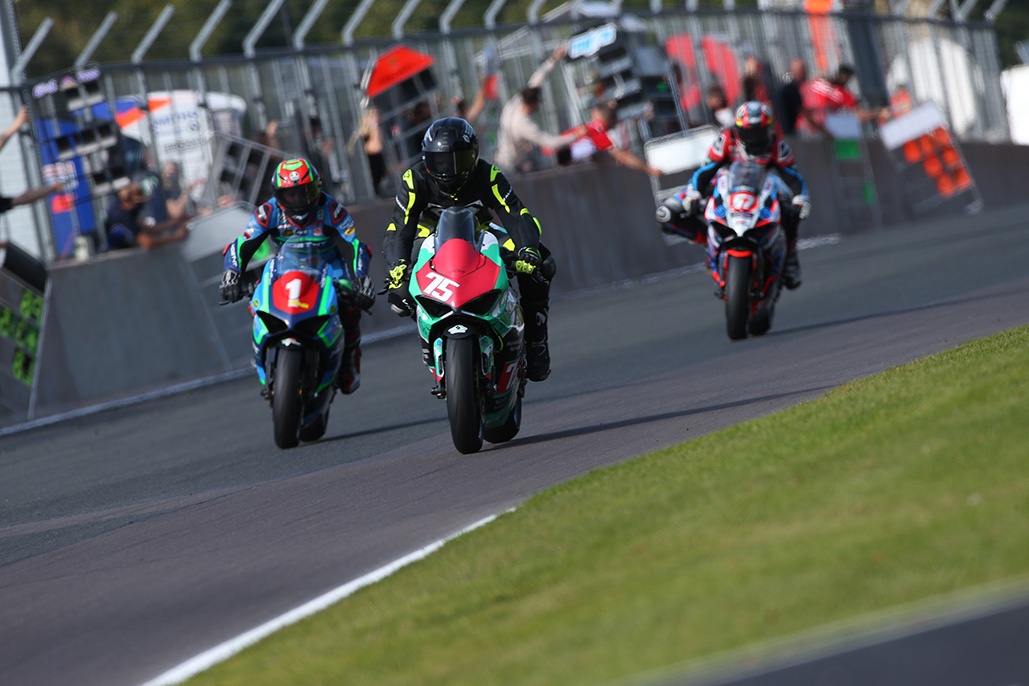 Race 1BPS Racing’s Levi Day built on his Silverstone success by beating his namesake to the weekend’s opening race win at Oulton Park on Saturday afternoon.Josh Day (Host-it.co.uk Racing Team) grabbed the holeshot after securing another pole, but Levi Day was soon able to find his way through to the front on Lap 2. After 2 DNFs Elliot Pinson (Symcirrus Motorsport) needed a strong result and had moved up into the lead position but an incident between him and Levi Day saw Pinson crash out of the race, leaving it a two-way battle for the win.Levi Day came under increasing pressure in the closing stages from reigning champion Josh Day but was ultimately able to claim his 2nd victory in succession, with Josh Day crossing the finish line 0.76s later.David Shoubridge (AH Performance) also matched his previous race result from Silverstone, finishing on the podium once again in 3rd place. These two strong results, combined with bad luck for Pinson, see last year’s inaugural R&G Ducati Shield winner move up into 3rd in championship behind Josh and Levi Day.John McGuinness (Lund Group) took his best result of the season to date in 4th. Sam Cox (Sam Cox Racing) crossed the line in 5th, Carl Stevens (Freeman Harris Racing Ducati) 6th, Craig Neve (CN Racing) 7th, Michael Tustin (Jones Dorling Racing) 8th, Matthew Jones (Dragon Racing) 9th, with Art of Racing’s Lee Devonport completing the Top 10 finishers.Race 2Pinson started Race 2 from pole, where he was joined on the front row by Josh Day and Levi Day who started from 2nd and 3rd respectively. And it was this trio who were once again setting the pace as Sunday’s race got underway.On Lap 3 Josh Day passed Pinson to take the lead before Levi Day went on to make a move on the Symcirrus Motorsport racer to take 2nd.As the race progressed Pinson was unable to match the pace set by the Josh and Levi Day. On the penultimate lap Levi Day set a new lap record on his Panigale V2 of 1:40.083s with the gap to Josh less than a quarter of a second as the two riders started their final lap.Back markers came into play with Josh Day making contact with Andy Booth, and then later running straight on. This helped Levi Day to go on and celebrate his birthday in style by taking the double win, his 3rd victory on the bounce.Josh Day took 2nd place, with Pinson claiming a well-deserved podium finish to put an end his recent run of bad luck.Shoubridge put in another strong performance on his new AH Performance Panigale V2 to finish 4th.After his best result to date on Saturday, McGuinness had a nightmare start to his race after a problem with his visor saw him line up at the very back of the grid. But he charged through the field, climbing 12 places on his opening lap alone, to finish his race in 9th.Josh Day’s championship lead over Levi Day is now reduced to 26 points, with two races left to run at the final Ducati Performance TriOptions Cup round which is scheduled to take place at Brands Hatch on 16-18th October.Levi Day (BPS Racing) – Race 1, 1st – Race 2, 1st“Josh has just been super consistent all year. We’ve finally broken that rhythm of him winning every race but he’s still always there, he’s on the podium every week. We’re doing all we can to try and close the gap. Winning races is all we can do, hope that some of the other guys can get into the mix at the final round. But he’s consistent every race, we’ve just got to keep doing our thing.”Josh Day (Host-it.co.uk Racing Team #1) – Race 1, 2nd – Race 2, 2nd“I thought I had it under control. I could see the backmarkers coming. They can go with you or against you. I just got on the throttle a bit early out of Druids and had a big slide and Levi just caught that gap I had. We came up to Andy Booth and I think he tipped in on me as I went through the corner, so I apologised to him. Fair play to Levi, he rode a good race again. It was good to see him get in the ’46s because he couldn’t get into them yesterday!”David Shoubridge (AH Performance #86) – Race 1, 3rd – Race 2, 4th“It feels great to be back on the podium. Especially the second round, straight after Silverstone. Oulton Park is a track I don’t know very well bit to give AH Performance and Signature Me their 2nd podium of the year on a new bike it’s a really good feeling.”Elliot Pinson (Symcirrus Motorsport #75) – Race 1, DNF – Race 2, 3rd“I haven’t had the best luck recently. Crashed out the first at Silverstone and then collisions with other riders ended up with me going down in the other two. Nice to finally finish, be back on the podium, score some points. I think the bike was a bit damaged from yesterday so I couldn’t keep pushing on. But fair play to Josh and Levi, they had a really good pace. Hopefully more to come at Brands.”