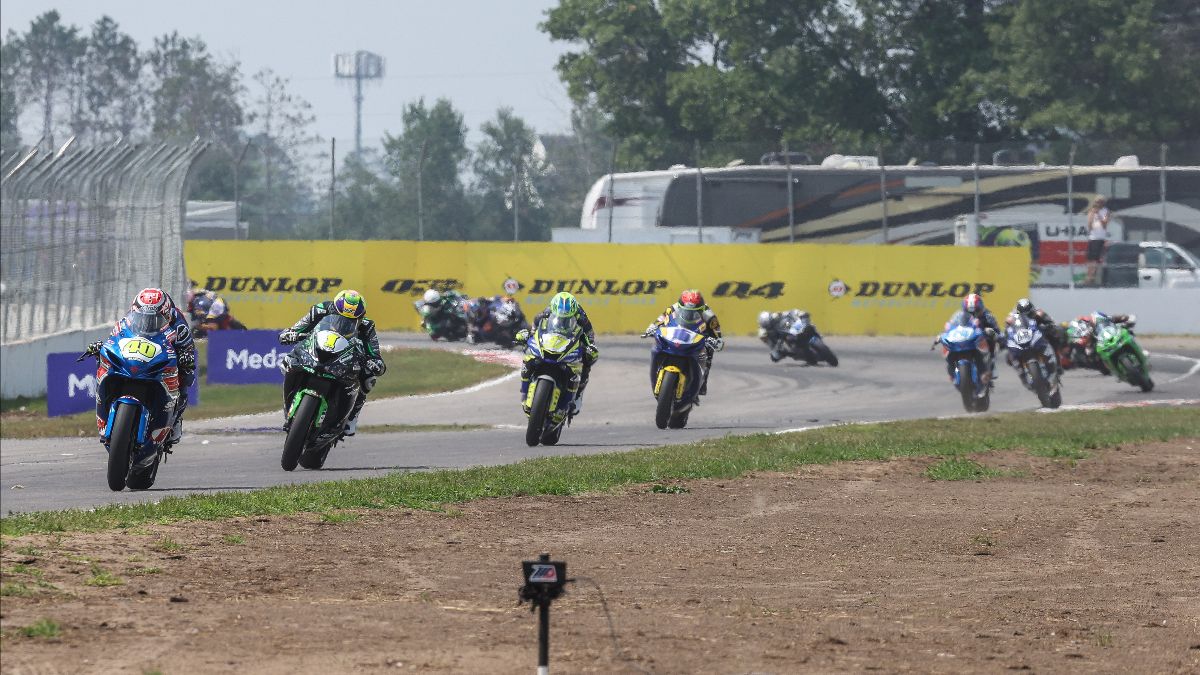 Jake Lewis and Richie Escalante both came to Brainerd International Raceway needing race wins in order to pull back the points disadvantage they faced heading into Minnesota. Lewis did just that while Escalante was thwarted in his attempt on a sunny, yet smoky, Saturday in the resort town of Brainerd.

With Lewis winning the Stock 1000 race, he was able to re-take the championship points lead over series rival Corey Alexander. Escalante, however, came up just short – .075 of a second short! – in his attempt to stop the runaway train that is Sean Dylan Kelly in the Supersport class.

In the SportbikeTrackGear.com Junior Cup class, meanwhile, Benjamin Gloddy was able to turn the tables on Tyler Scott and now trails the championship leader by seven points.

In the only Stock 1000 race of the weekend, Altus Motorsports Suzuki rider Jake Lewis started from pole and got the holeshot, but Chuckwalla Valley Raceway/Octane Lending Kawasaki rider Michael Gilbert chased Lewis down and took the lead temporarily until Lewis re-established himself at the front on lap three and maintained his advantage all the way to the checkered flag.

While Gilbert finished second, it looked like the third-place finisher was going to be Ashton Yates, but on the final go-around of the 13-lap race, Yates crashed out of the podium position, and MESA37 Racing Kawasaki’s Stefano Mesa finished third.

“Honestly, I didn’t expect to be this fast this weekend,” Lewis said. “The bike has just been feeling really good this weekend. The crew has been working flawlessly. No issues at all throughout the whole weekend, which has been nice. Last week like I said on the podium, I was down in Georgia on vacation with my girlfriend and her brother is a big workout guy and we went running every day. I even lost some weight. Just getting in better shape. It does a lot for my confidence. I just feel really good physically and mentally. I know the only way I can kind of win the championship is to get race wins. I was kind of in a deficit. Coming into this round, 12 points is quite a bit. Especially after that DNF, we gave up a lot of points. Just got to be smooth the rest of the year and keep trying for wins.”

HONOS HVMC Racing Kawasaki’s Richie Escalante came into Brainerd International Raceway with a plan to stem the tide. The defending Supersport Champion knew he had to stop points leader Sean Dylan Kelly’s winning streak and start a winning streak of his own. In Saturday’s race one, despite being pressured by Escalante for virtually the entire 16-lap event, Kelly was never headed and raced his M4 ECSTAR Suzuki to his eighth win of the season and fifth victory in a row. Meanwhile, third place went to Kelly’s teammate Sam Lochoff, who passed Benjamin Smith on lap 13, and completed the podium.

“It was definitely a tough race,” said Kelly. “Not super happy with how my pace was. I was definitely expecting more of myself, but that’s how us racers are. We win a race, and we still aren’t too happy about it. Happy with the race win, with the consistency and being able to fight up there, not letting Richie by. We need to do some homework and make a proper step for tomorrow. Honestly, everything has felt good up to this point. I just went out onto the track today and had a lot of moments. We saw some weird crashes. There was clearly some stuff on the track. Just definitely bothered me. Didn’t have the best confidence out there once we had some moments. But we’re going to do our homework tomorrow and come back just a little bit better. Looking forward to making a good race.”

Saturday’s Twins Cup race was one of best events of the day as former Minnesotan Kaleb De Keyrel returned to the track on which he learned to race and got the win aboard his Robem Engineering Aprilia. But it wasn’t easy. Veloce Racing Aprilia rider Anthony Mazziotto came from the second row of the starting grid and led most of the 12-lap race until De Keyrel overtook Mazziotto in the final turn before the finish line. While Mazziotto settled for second, Innovative Motorsports/Mike’s Imports Suzuki rider Teagg Hobbs rose from his second-row, fifth-place starting position to third and the final spot on the podium.

In the beginning of the race, Jackson (Blackmon) and Hayden (Schultz) were all riding really good,” said De Keyrel. Mazziotto got away. I’m sitting back there kind of battling with these three and I’m like, ‘Oh man. He’s getting away, getting away, getting away.’ By the time I got by, he had a pretty big lead. I just was like, all right, I need to keep chipping away a little bit, a little bit, a little bit. But I kind of wasted a lot of tire catching back up to him. I could tell he was struggling, and I also knew I was struggling quite a bit, so on that last lap I knew I needed to try and plan an attack somewhere. But, like he said, going through turn one, he was sliding the rear and I was right here. So, his rear is sliding and I’m right next to him. It was just a fun race. It was pretty sketchy towards the end and we both had to just ride smart. You had to be super easy on the throttle because we didn’t have very much grip towards the end. So, I’m going to have to go back with the crew and try to figure out a better game plan as far as longevity of the tire for race two.

“I really wanted to win, just because I have a ton of friends and family out here supporting me, cheering me on. So, I really wanted to win for them. Honestly, the last lap, me and him are both sliding around so much, I wasn’t even focused on the win. I was just focused on keeping it upright, to be honest with you. It was really fun.”

Landers Racing Kawasaki rider Benjamin Gloddy won two SportbikeTrackGear.com Junior Cup races earlier this season, but he has finished second to Scott Powersports KTM rider Tyler Scott a lot more times than he would like. On Saturday at Brainerd International Raceway, Gloddy and Scott engaged in another of their frequent battles for the win, and on the final lap of the race, it was Gloddy who overtook Scott in the final turn to get the win. The victory moved Gloddy to within seven points of Championship leader Scott. Third place went to Veloce Racing Kawasaki rider Max Toth, who made his return to the class after suffering a hand injury in a crash at Ridge Motorsports Park at the end of June.

“This feels pretty good being back here,” Gloddy said about his race win. “I was struggling with grip a lot through the race. Just tried to keep the tire underneath me. I was kind of having to ride it more like a bigger bike to get on the contact patch and drive off the corner. Great race with Tyler. We’ll make some changes. Hopefully, we can have a better race tomorrow.”