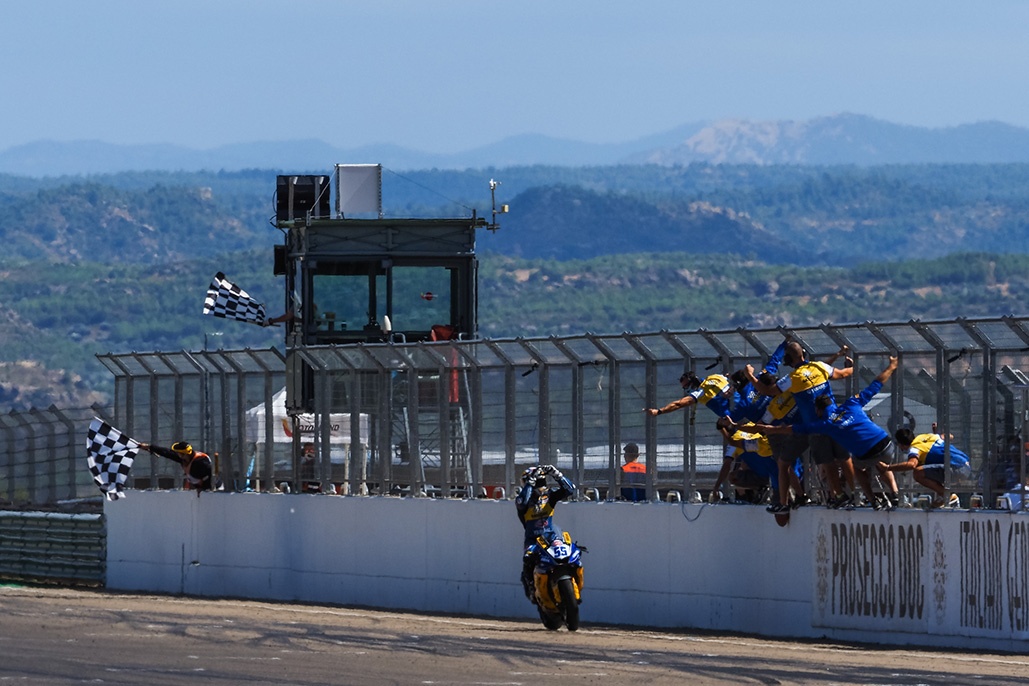 Andrea Locatelli continues to make World Supersport history as he claimed another victory and fastest lap.

A familiar face stood on top of the FIM Supersport World Championship podium at MotorLand Aragon as Andrea Locatelli (BARDAHL Evan Bros. WorldSSP Team), the only rider to win a WorldSSP race in 2020, continued his streak with victory at the Prosecco DOC Aragon Round as he made it six race wins in his first six races.

The battle for the lead between Jules Cluzel (GMT94 Yamaha), Andrea Locatelli (BARDAHL Evan Bros. WorldSSP Team), Philipp Oettl (Kawasaki Puccetti Racing) and teammate Lucas Mahias reached a peak on Lap 2 as Cluzel went from fourth to first, passing both Oettl and Mahias, with Locatelli following him through into second place.

Both Cluzel and Locatelli were able to break away from the leading group as the duo engaged in a titanic battle until the third lap; Locatelli making a move on the inside of Turn 16 on Cluzel. It was a move he had tried a lap before but on that occasion Cluzel was able to respond into Turn 1 but was unable to the second time around. Locatelli then extended his lead throughout the race to claim victory, with Cluzel in second place as he secured another podium in 2020, finishing ahead of Oettl in third.

Raffaele de Rosa (MV Agusta Reparto Corse) secured a top four finish as three manufacturers finished in the first four places as Mahias, who had been in the lead group and involved in the epic battle in the opening laps, finished in fifth place. Steven Odendaal (EAB Ten Kate Racing) and Isaac Viñales (Kallio Racing) had a titanic battle for sixth place which went down to the final lap; South African Odendaal regaining the place on the final lap to secure a top six finish with Viñales seventh.

Manuel Gonzalez (Kawasaki ParkinGO Team) and Danny Webb (WRP Wepol Racing) were also involved in a battle just behind Odendaal and Viñales, with Gonzalez holding on to finishing eighth with Webb in ninth. Corentin Perolari (GMT94 Yamaha) looked to be fighting at the front but fell back throughout the race, eventually finishing the 15-lap race in tenth place.

Peter Sebestyen (OXXO Yamaha Team Toth) was unable to capitalise on his career-best result from Superpole as he retired from the race, along with Lachlan Epis (MPM Routz Racing Team), Stefano Valtulini (Blackflag Motorsport) and Hannes Soomer (Kallio Racing).

P1 Andrea Locatelli (BARDHAL Evan Bros. WorldSSP Team)
“Six victories is incredible. The feeling is good every time. Today, we pushed but we stay calm because tomorrow is a harder day. We have another race but I’m confident and I’ll push again tomorrow.”

P2 Jules Cluzel (GMT94 Yamaha)
“I’m happy. It’s a strong race, it’s a difficult weekend because the length of the circuit is making a bigger gap compared to the bigger circuits. It’s nearly impossible to fight with him, it’s not possible to be honest. I tried to save what I can. In the other race, I’m the best of the others. We cannot explain what happened but I am happy to score 20 points and I’m focussed on tomorrow to make some improvements because Oettl rode really well, he pushed me the whole race and I need to improve a little bit for tomorrow.”

P3 Philipp Oettl (Kawasaki Puccetti Racing)
“I’m really happy to be on the podium again. It was a hard race, especially in the beginning until I found a good rhythm. After Lucas Mahias and Isaac Viñales had a small discussion at Turn 1, I thought now is the time to push and make a gap. That was exactly the right thing to do in that moment so I’m really happy for the team and tomorrow we can have another good race.”