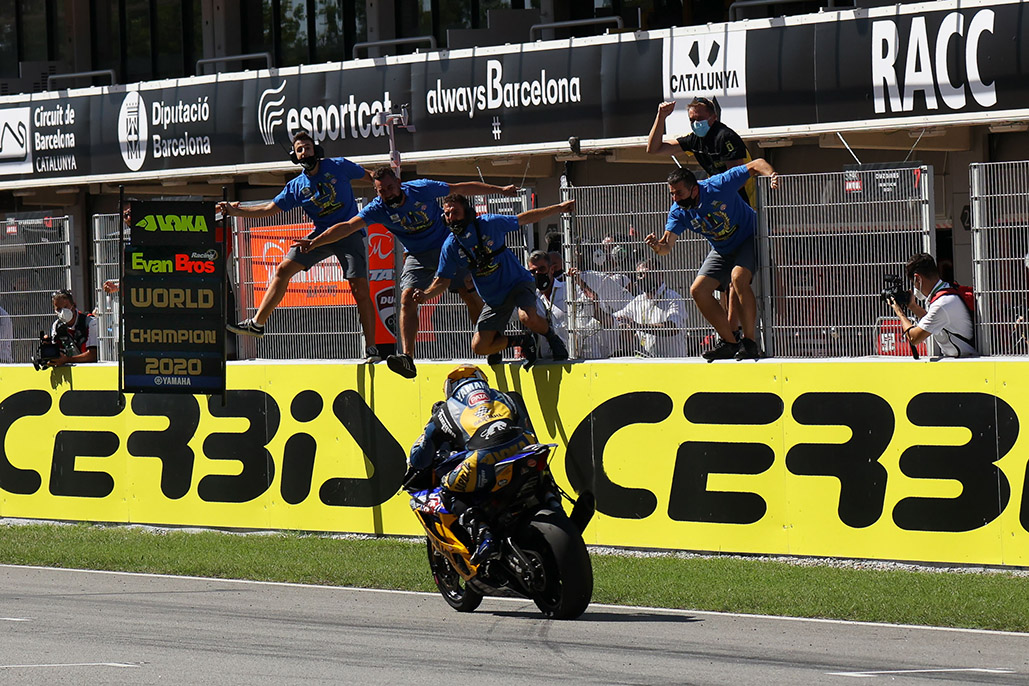 A fightback in the race after a poor start allowed Andrea Locatelli (BARDAHL Evan Bros. WorldSSP Team) to be crowned World Champion in the 2020 FIM Supersport World Championship after battling his way from fifth to the front of the field at the Circuit de Barcelona-Catalunya for the first ever Acerbis Catalunya Round.

Locatelli had started from pole position but found himself down in fifth place after the opening handful of laps with Locatelli not taking risks in the early stages, despite falling behind Lucas Mahias (Kawasaki Puccetti Racing). It would take until Lap 5 for Locatelli to start making moves, first passing Raffaele de Rosa (MV Agusta Reparto Corse) into Turn 1 before he passed Corentin Perolari (GMT94 Yamaha) a lap later.

The title-winning move came on Lap 9 as he made a move on both Mahias and Philipp Oettl (Kawasaki Puccetti Racing); Locatelli forcing Mahias wide and onto the run-off between Turns 1 and 2 although Oettl was able to pass Locatelli shortly after. Locatelli then extended his gap at the front to just over two seconds as he secured victory and the World Championship.

Mahias finished the race in second place, meaning Yamaha secured the Manufacturers’ Championship with Mahias finishing second onboard his Kawasaki. Mahias was joined by teammate Oettl on the podium, with Mahias getting past Oettl with a handful of laps to go but unable to close the gap to Locatelli.

Perolari fell down the order in the latter stages of the race to finish in eighth place with Danny Webb (WRP Wepol Racing) in ninth; the British rider securing another top ten finish – his fifth in the last six races. Estonian Hannes Soomer (Kallio Racing) completed the top ten, finished just over a second behind Webb.

There was a collision on the run down to Turn 1 at the start between Can Öncü (Turkish Racing Team) and Patrick Hobelsberger (Dynavolt Honda) with Hobelsberger taken to the medical centre for a check-up before being diagnosed with a left hip contusion and suspected pelvic injury. He will be transferred to hospital for further assessments. Galang Hendra Pratama (bLU cRU WorldSSP by MS Racing) crashed on Lap 2 of the race while Kyle Smith (GMT94 Yamaha) and teammate Oscar Gutierrez came together on the same lap; all three riders retiring from the race.

P1 Andrea Locatelli (BARDAHL Evan Bros. WorldSSP Team)
“It’s a dream! Until then you know it’s alive but it’s an incredible day. We work everywhere, every time very well and this is our objective. This is an incredible day and I don’t have any words but I’m very excited. Thanks to my guys because they work very hard every time and this is the result.”

P2 Lucas Mahias (Kawasaki Puccetti Racing)
“The race is not so bad again it’s not possible to win. I tried to follow but exactly the same race compared to the first part of the season and every stage of the season. It’s not possible to ride in the rhythm of the yellow bike. For sure, it’s not easy because when you start the race and your best position is second it is not nice, but this is racing and this is the racing for this year. I am happy for my team with second position and for Kawasaki because my teammate finished third and this is nice for the Puccetti team and Kawasaki.”

P3 Philipp Oettl (Kawasaki Puccetti Racing)
“It was a tough job, I decided to use the softer rear tyre but after 10 laps to go I felt there was a drop and then I was just sliding around. I tried to build as much grip as possible, but it was a very hard job to do this with pickup but I’m happy, we have a 2-3 with Kawasaki and I think I learnt a lot this weekend. In the past two races, we didn’t have enough luck to finish on the podium but today feels really good.”