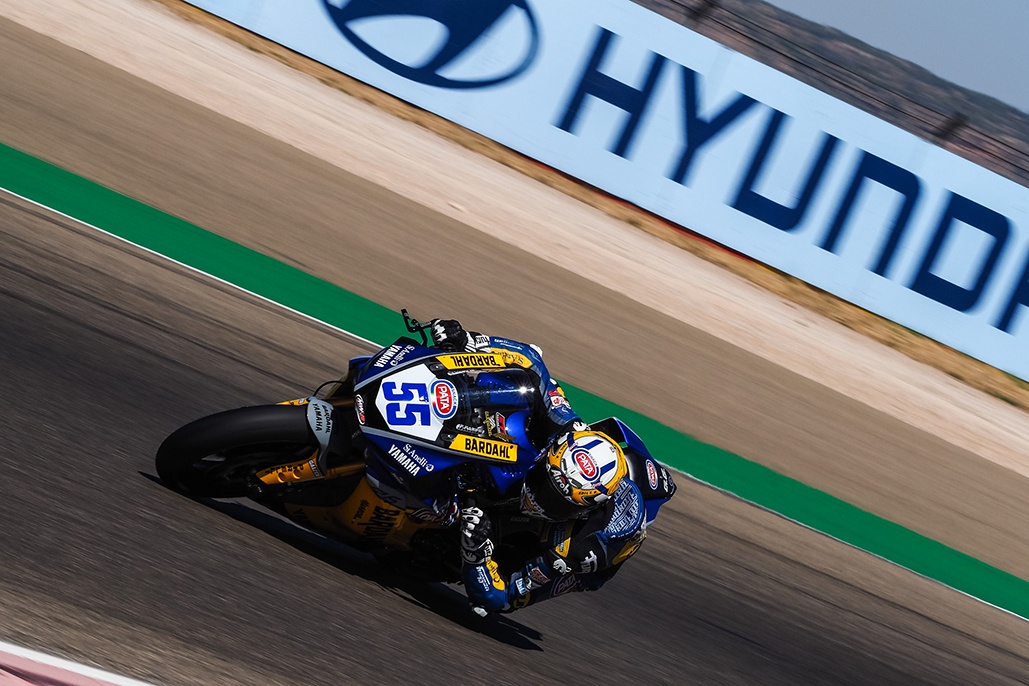 Italian rider Andrea Locatelli continues to top sessions as he searches for win number eight of the season.

FIM Supersport World Championship action continued at MotorLand Aragon with Andrea Locatelli (BARDAHL Evan Bros. WorldSSP Team) topping the combined Free Practice classification for the Pirelli Teruel Round after going fastest in both practice sessions on Friday; the Italian going more than half a second clear of his nearest rival.

Locatelli has won every race, claimed every pole position and secured every fastest lap so far in the 2020 WorldSSP season and has shown impressive pace again as he topped the times on Friday, finishing ahead of Raffaele de Rosa (MV Agusta Reparto Corse) as the second-placed Italian rider showed strong pace from the start of the action. Lucas Mahias (Kawasaki Puccetti Racing) was third after Friday running as the highest place Kawasaki rider on the grid.

Hannes Soomer (Kallio Racing) was fourth fastest as the Estonian rider looks to rebound from a difficult Aragon Round where he retired from both races, beating Jules Cluzel (GMT94 Yamaha) by just 0.060s in fifth place. Cluzel, currently second in the Championship, will be hoping to make a step forward ahead of Saturday’s Tissot Superpole and Race 1 in order to take the fight to Locatelli as he has done in the early stages of recent races. South African rider Steven Odendaal (EAB Ten Kate Racing) finished the day in sixth place as he chases his first WorldSSP podium.

Isaac Viñales (Kallio Racing) was seventh fastest for the day after showing impress pace in Free Practice 2; the Spaniard bouncing back from a crash in Free Practice 1 where he was unable to set a time. Manuel Gonzalez (Kawasaki ParkinGO Team) was in eighth place with Philipp Oettl (Kawasaki Puccetti Racing) and Hungarian rider Peter Sebestyen (OXXO Yamaha Team Toth) once again showing strong pace to be in the top ten.

Federico Fuligni (MV Agusta Reparto Corse) finished in 11th place ahead of Danny Webb (WRP Wepol Racing) in 12th; Webb once again showing competitive pace in the team run by James Toseland. Alejandro Ruiz Carranza (EMPERADOR Racing Team) was the highest placed WorldSSP Challenge rider in 13th place, ahead of Can Öncü (Turkish Racing Team); the Turkish rider crashing in Free Practice 1 but able to get back out on track for Free Practice 2. Corentin Perolari (GMT94 Yamaha) completed the top 15.

It was an action-packed day for Galang Hendra Pratama (bLU cRU WorldSSP by MS Racing) as the Indonesian rider crashed in both practice sessions on Friday but able to set the 17th fastest time overall. Patrick Hobelsberger (Dynavolt Honda) also suffered a crash in Free Practice 2 and was slowest overall after Friday running.